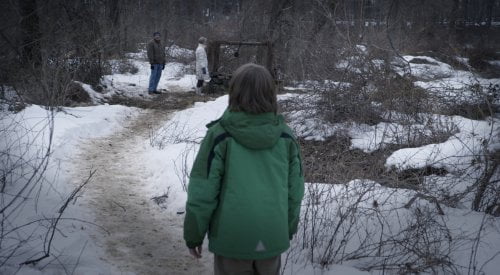 When their mom (Kathryn Hahn, "This Is Where I Leave You") goes on a cruise, Becca (Olivia DeJonge, "The Sisterhood of Night") and Tyler (Ed Oxenbould, "Alexander and the Terrible, Horrible, No Good, Very Bad Day") are sent to spend a week at her parents' Pennsylvania farm. Budding filmmaker Becca decides to make a documentary about the grandparents she's never met, but there's something strange about her relationship with them mom neglected to mention before "The Visit."

After becoming a name writer/director with 1999's "The Sixth Sense," M. Night Shyamalan went into a tailspin with 2006's "Lady in the Water," spiralling further with such duds as "The Last Airbender" and "After Earth." Shyamalan's apparently taken a much needed step back, rebounding this year, first on television with 'Wayward Pines' and now with this low budget horror comedy rigged much like his first hit - when the twist arrives, you won't believe you didn't see it coming, the director laying his signposts all along. While the film isn't a total home run (it deflates pretty much after its twist is revealed), it's a solid entertainment, very well played by its two young leads. Oxenbould, in particular, should see his stock rise in light of his confident and funny characterization here. When Becca isn't wielding her camera, she's online editing footage or Skyping with mom. We learn the family of three is still smarting from their abandonment by the man who caused a fifteen year rift between mom and her parents. Becca's managing her anger, but brother Tyler has OCD issues and occasionally takes on the rap persona of T Diamond Stylus. Becca's agenda is to not only document their week at Nana (Deanna Dunagan, "Running Scared") and Pop Pop's (Peter McRobbie, "Inherent Vice," "Aloft") rural Pennsylvania farm, but to get to the truth of her mom's last day there. At first, everything's tree swings, freshly baked cookies and hugs, but the kids begin to get a bit unnerved by their grandparents' behavior, even when there is always a feasible explanation (most notably Pop Pop's admission that Nana suffers from 'sundowning,' a dementia exasperated by dark). The couple, who until recently did volunteer counseling at a local hospital, are clearly missed by the doctor and a former patient who stop by and talk to Becca. Tyler is the more disturbed of the two, claiming 'blindness' to his mom for having seen Nana running about naked at night, but Becca stays the course, even after Nana goes all Hansel & Gretel's witch on her. By the end of the week when things appear to be getting a bit too out of hand though, Becca ignores Pop Pop's warning of mold in the basement and ventures down for a look. Considering its low budget and lack of name stars, Shyamalan has carefully crafted his film for maximum impact, his shots taking advantage of the old farmhouse and its grounds, framed mostly from Becca's POV, often like a Peeping Tom (a window over the kitchen sink becoming something of a lookout spot, the door from the kids' room allowing a limited view of what's going on outside it). Sound, an integral aspect of any horror outing, is also a plus, scratchings and scramblings suggesting weird goings on. Using Becca's documentary, which is quite a competent effort, Shyamalan's script comments upon the filmmaking process itself, his young teen looking for 'organic' shots and considering ethics with her camera placement. Nana wishes to be the 'star' of her film, at least until questions about her daughter Loretta cause a fit, while two outsiders practically audition. DeJonge, Australia's answer to Britt Robertson, gives a thoughtful, mature performance as the older sister while Oxenbould's unconventional retorts and biographical rapping provide the laughs. As Nana, Dunagan elicits sympathy, a fading senior beauty whose intervals of crazy are disturbing as much as for what they mean for her character as in and of themselves. McRobbie is less readable, a taciturn farmer type. Hahn does a great job balancing maternal concern with a need for her own escape, all the while keeping us guessing as to just what she's not revealing. The film offers chuckles and jumps aplenty, so it is a disappointment when the film reverts to standard horror fare at its climax (with one really sick joke thrown in for good measure). The familial dysfunction at its heart is soft-pedaled, too, a reversion to Shyamalan's pre-Sixth Sense filmmaking. At least he goes out on a high note with an Oxenbould rap out. Grade: