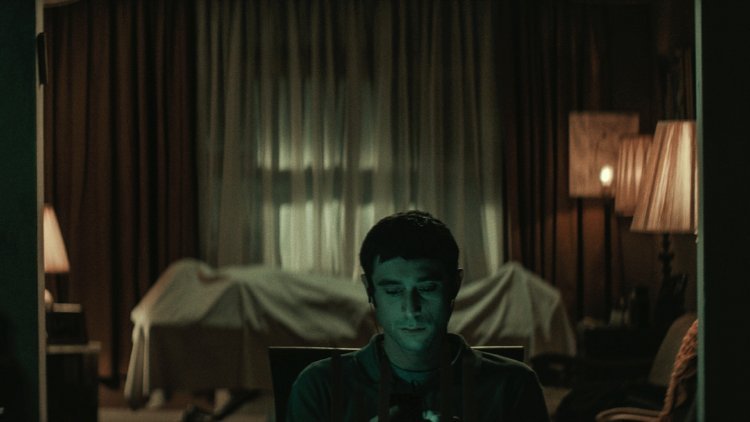 During a gathering of those who have left the Hasidic community, Yakov Ronen (Dave Davis) is approached by Sarah (Malky Goldman), asking for his phone number.  It is also noted that, once again, his former rabbi stands outside under a streetlight.  Yakov says he will take care of the situation, but Reb Shulem (Menashe Lustig, "Menashe") surprises him with an offer of much needed cash to be a Shomer sitting with the deceased Rubin Litvak (Ronald Cohen) for five hours until the mortuary men will arrive.  Learning that the last Shomer ran off in fright, Yakov bargains for twice the cash for “The Vigil.”

Writer/director Keith Thomas takes a common horror scenario, that of the person left alone with a corpse, and gives it a specifically Jewish twist, incorporating the rite of the vigil, the role of the Shomer and the Talmudic lore of the Mazzik.  While the Mazzik is defined as a ‘minor annoyance,’ Thomas’s is a much more horrifying demon which attaches itself to those bearing soul crushing guilt.

While we can guess that the deceased will have a Mazzik based on Thomas’s eerie flashback prologue, he teases out Yakov’s back story more slowly.  The first thing we learn about him is that he is in dire financial straits.  Shulem warns him that Mrs. Litvak (Lynn Cohen, "Munich") is not only frail, but suffering from Alzheimer’s, but the small elderly woman we meet fiercely declares that Yakov is not the right man for the job and demands he leave immediately.  She then withdraws up a shadowy staircase as Yakov settles in, the draped corpse laid out behind him on a wheeled gurney in front of the living room windows.  With his back to the body, he puts in earphones and begins to look up articles on how to talk to women.  Then the fun begins.

Thomas employs that most essential horror component – an effective sound design – early and often, complemented by Michael Yezerski’s ("Blindspotting") unsettling score.  All the effects here appear to be practical, ensuring a well earned creep factor.  There are a number of bodily horrors, none more freaky than the fact that Thomas’s Mazzik features ‘a head turned around so that it is always looking back.’  Production design and art direction are also essential here.  A real house in Brooklyn's Hasidic Borough Park is well worn, everything old and cracked and the color of old books.  A disturbing painting is visible over Yakov’s shoulder as he sits answering Sarah’s texts.  An old photograph slips out of a book, suggesting the long held curse of the Litvak family.  An old film running in the basement is spookily interactive.  Yakov’s eventual call to Dr. Marvin Kohlberg (Fred Melamed, "A Serious Man") fills in background but not before delivering a jolt of its own.

Casting, featuring vets like Cohen (superb) mixed with lesser known actors, is also a plus here.  The low budget approach to effects only fails during the film’s climax, too obviously a DIY effort, but bounces back for its final minute, Yakov’s fate coming into focus just as the camera loses its.   “The Vigil” may be rooted in the Jewish religion, but there is more than a little Father Karras in Yakov.

IFC Midnight is releasing “The Vigil” on 2/26/2021, but the Boston Jewish Film Festival is featuring a special preview screening from 2/16-22 – tickets can be purchased here.