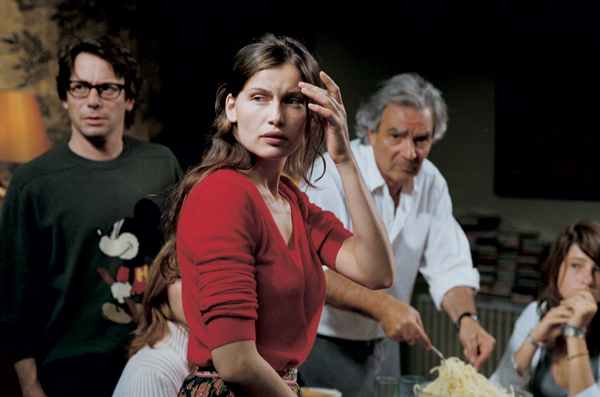 The Tenant Law of 1948 put a cap on what French property owners could charge for their rent-controlled apartments in France. However, it is the new millennium and one proprietor, Charlotte Falingard (Noemie Lvosky), of a 3000 square foot flat in the heart of Paris, wants her tenants out so she can make a big profit renting the place to more affluent lessees. Current occupant Francisca (Laetitia Casta), a former law student, wants to keep a roof over the heads of her and 17 others and searches for a legal loophole to stay in “The Very Big Apartment.”

Helmer Pascal Thomas creates a wacky little film in the tradition of such screwball comedies as “You Can’t Take It With You (Frank Capra, 1938)” and “Ball of Fire (Howard Hawks, 1941).” The premise is simple: apartment owner Falingard wants her squatter-like tenants out and they want to stay in that prime bit of Parisian real estate. Francisca is the head of the extended family in the titular flat, along with her husband, Martin (Mathieu Amalric), bohemian filmmaker Adrien (Pierre Arditi), a ditzy grandma (Carmen Durand), a neurotic sister and a host of friends. The story centers on their schemes to remain in the apartment but Thomas surrounds this with a number of side yarns that make this a fun piece of movie viewing. Other stories within “The Very Big Apartment” involve Martin, away on a business trip, coming under the lustful gaze of Veronique (Stephanie Pasterkamp) who wants to jump his bones. He resists, at first, but goaded by the sultry young thing’s declaration that fidelity is being chicken,” Martin soon tumbles into the sack with the saucy vixen. His attempts to keep his extramarital affair a secret provide an entertaining sideline to Francisca’s plans to keep the apartment. Another storyline involves egotistic Adrien, a filmmaker who prides himself in making movies with no professional actors. He uses the denizens of the apartment as his cast and crew, creating a fictional, and funny, world within the four walls of their home. Still another line has Francisca using her not-entirely-with-it grandma to pose as the real lessee of the flat before the court, to no avail. Instead, Adrien comes to the rescue in the end, using his charm to save the day in an unexpected way. The Very Big Apartment” is not a great, earth shaker. It is, however, fun from start to finish, making it solid entertainment that will transcend its French market and push it to international audiences looking for a screwy comedy with a wacky cast of characters, machinegun rapid dialog and a satisfying conclusion.