The U.S. vs. John Lennon 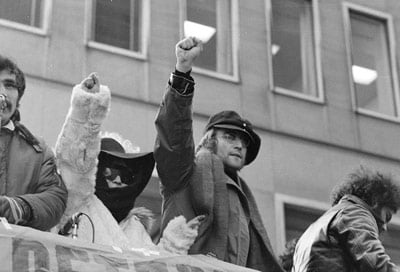 When former Beatle John Lennon and his performance artist wife Yoko Ono moved to New York City and became antiwar activists by staging bag-ins and bed-ins the media mocked, but when they began funding groups like the Black Panthers, F.B.I. Chief J. Edgar Hoover and his president, Richard Nixon, were not amused. They harassed the pop star and his wife by tailing them and wire tapping their phone and even tried to deport them, but John fought back in the court case known as "The U.S. vs. John Lennon."

Writer/directors David Leaf and John Scheinfeld ("Sinatra: The Classic Duets," "Ricky Nelson Sings") obtained incredible access to rare archival footage, photos and music by acquiring the cooperation of Yoko Ono. It is, therefore, no surprise that "The U.S. vs. John Lennon" is all pro and no con, a terrific piece of entertainment for fans of Lennon but a poor examination of its titular subject and its current day ramifications. The filmmakers chart Lennon's rise as a political being beginning with the hubbub raised in the U.S. over the twisting of Lennon's words describing the Beatles as more popular than Jesus Christ and never miss an opportunity to showcase the man's wit - in one of many press conferences addressing the issue, Lennon states that 'you'd have to be a monk' not to realize that kids today were more into pop stars than Church going, then mock realizes his words with a 'Sorry, monks!' Very quickly thereafter, Ono finds her way into the story as a genius performance artist who provides Lennon with 'the rest of his voice.' Their marriage is presented as a love story of oft-shared kisses, adoring gazes and mutual artistic enlightenment. While it would be easy to target the filmmakers for neglecting to mention John's affair with Yoko's assistant and his year of debauched living in L.A. carousing with the likes of Harry Nilsson with a tampon on his head, one can appreciate that these events have little to do with the subject at hand. What is not forgivable, however, is their failure to mention his vast experience with drugs, including heroin. The deportation charge is based on an earlier English marijuana conviction. Lennon explains that a certain cop got famous busting pop stars and that he was set up - case closed. Nor do they address any possibility of political naivete. The film is probably most significant for shedding some artistic explanation behind Lennon and Ono's stunts, yet the man's sometimes questionable song lyrics are swept beneath a rug. "The U.S. vs. John Lennon" is an easy score for Leaf and Scheinfeld because one cannot but help fall under the spell of the beloved Beatle whose life was ended so tragically. Yet they even manage to botch his death up. For one thing, their film has a natural ending with Lennon's winning his case after many years on a day that is both his birthday and the day his son Sean was born, a happy confluence of significant events. But they just have to go there, ending their film with a thud by wrapping with the sound of gunshots and failing to note neither the irony of Lennon being assassinated in the country he fought so hard to stay in nor the motivation of the man who shot him, a killer disillusioned with a millionaire singing 'Imagine no possessions...'

In the late 1960’s and early 70’s the United States was gripped by an unpopular war in Vietnam and a growing movement against that conflict. One of the most visible, outspoken critics of Richard Nixon’s governmental policy was former Beatle John Lennon who came under the scrutiny of the FBI and faced deportation in “The US vs. John Lennon” This nostalgic documentary, by David Leaf and John Scheinfeld, tells of the trials and tribulations that Lennon faced as he made his antiwar attitude known to the world. His provocative anti-war statements, like give peace a chance,” brought him to the attention of the Nixon administration, particularly the FBI fiefdom run by J. Edgar Hoover. As Lennon’s opinions became more fervent and bold, the FBI and the INS set wheels in motion to throw Lennon and wife, Yoko Ono, out of the country. Copious use of talking head interviews with Lennon’s friends and devotees, and such historical figures as Black Panthers Bobby Seale and Angela Davis, Gore Vidal and Mario Cuomo, present the liberal views of the filmmakers. But, they present Lennon’s critics, too, in the guise of the ultra-right represented by former Nixon henchman, G. Gordon Liddy. It’s an uneven balance but “The US vs. John Lennon” isn’t here to present both sides of a coin. It is a liberal treatise that chronicles the injustice of a government against a man who eschewed war for peace. Copious use of Lennon’s music, during the time, and the interviews with the man are a real draw for Beatles fans and temper the serious aspects of the document. The US vs. John Lennon” wears its heart on its sleeve as it, mostly, presents one side of the battle between warmongers and peaceniks. The plethora of John Lennon material, during his ordeal, show the strains that the young artist faced as he ages visibly in just a few short years. The film ends with the expected coda of his untimely demise that has nothing to do with the title intent and, to me, is a cheap shot.