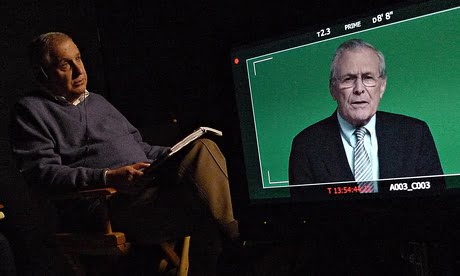 Documentary master Errol Morris has made a score of films, long and short, since his debut in 1978 with “Gates of Heaven” about pet cemeteries. He received an Oscar for “The Fog of War” about the life of Robert McNamara and, now, brings us the story of the controversial political figure, Donald Rumsfeld, in “The Unknown Known.”

I have been a fan of Errol Morris since he began making documentary films, especially the Robert McNamara autobiography. But, I have never been a fan of Donald Rumsfeld who, in my opinion, should have been tried as a war criminal for his actions as Secretary of Defense under George W. Bush. So, it was with distaste in my mouth that I watched “The Unknown Known.” Errol Morris is, as said earlier, a master documentary filmmaker so, despite my feelings about his subject, I knew he would create a quality, even-handed work. My opinion did not change about Donald Rumsfeld after watching “The Unknown Known.” Instead, Morris reinforced my feelings by letting his subject tell his side of his political life. I still think he is a war criminal, particularly with his stance on the WMD issue – ‘the absence of evidence is not evidence of absence” - in Iraq in 2003 and the invasions of that country and Afghanistan. Rumsfeld, George W. Bush and Dick Cheney plunged us into two conflicts that lasted over a decade and resulted in the deaths of hundreds of thousands, including thousands of Americans. The big difference between “The Fog of War” and “The Unknown Known” is the subject. Robert McNamara was intelligent and articulate and willing to accept blame for his failed efforts. Donald Rumsfeld, with his infuriating grin, does a verbal dance about his bad and deadly decisions and always puts himself in the best light. Morris, though, is able to pierce Rumsfeld’s defenses and refute his excuses with his trademark interview technique and his “Interrotron” camera that forces the subject to look us in the eye. Morris also uses archival footage to flesh things out in his chronicle of Rumsfeld. “The Unknown Known” and “The Fog of War” are bookend works that give us very different perspectives of the two men, one who teaches us about the lessons he learned while Secretary of Defense while the other gives excuses. Guess which is which.