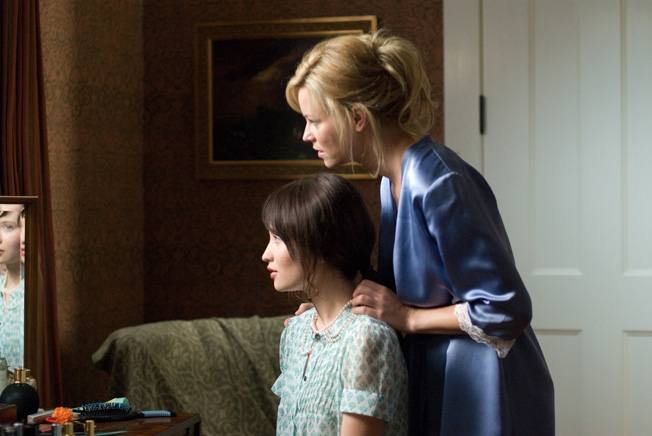 Of course, "The Uninvited" was a superior 1944 ghost story whereas this 2009 release is actually a remake of Jee-Woon Kim's 2003 Korean masterpiece, "A Tale of Two Sisters," and like most English language remakes of Asian horror subtlety takes a back seat to bludgeoning. British directors Charles and Thomas Guard time their fx for quick shocks rather than building creep and prefer the loud noise jump over eerie whisper. In addition to borrowing its title from an unrelated film, the Guard Brothers borrow prodigiously from other films as well. An opening credit shot of David's car snaking along a rural road echoes the same shot in "The Shining" and a ghostly accusation of 'Murder!' evokes 'Redroom' yet "The Shining's" ghostly little girl makes some dreadful entries courtesy of "Audition." "The Sixth Sense's" tricks are perhaps too well known to have been utilized with anything other than diminished results and a scene of false hope with an authority figure followed by drugs administered by the 'bad guy' is straight out of "Rosemary's Baby." Production design, exemplary and pivotal to the original film, seems lifted from "What Lies Beneath" (along with liquids oozing from keyholes) and the Hollywood tendency to environ its characters in homes most audiences could merely dream of even visiting. At least screenwriters Craig Rosenberg ("After the Sunset") and Doug Miro & Carlo Bernard ("The Great Raid") have Rachael note the wallpaper even though most of it has been replaced by designer paint shades ("A Tale of Two Sisters'" wallpaper patterns were exquisitely ornate). Emily Browning was notable in "Lemony Snicket," but does little to get audiences on her side as the beleaguered Anna - she's either terrified or zoned out. As her sister, Arielle Kebbel pours on rebellious 'tude a bit thickly, but does have a way of snapping out a zinger. To her credit, Elizabeth Banks uses her chilly blond looks for both appeal and threat, creating a good central villain, but one walks away wondering just what it was that drew the Oscar nominated Strathairn to this project. In small roles, both Dean Paul Gibson, as Anna's shrink, and Heather Doerksen, as another inmate, stand out. "The Uninvited" is probably a slight cut above most Asian inspired horrors, mainly because it was inspired by the best of them. For the same reason, it is also one of the most disappointing.