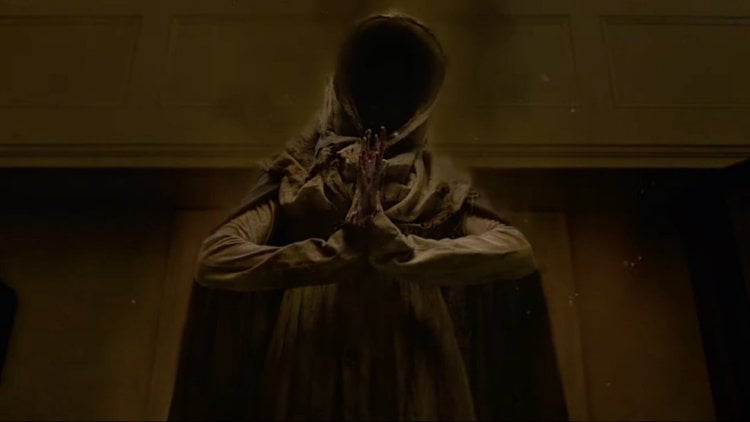 Gerry Fenn (Jeffrey Dean Morgan), a journalist hoping to burnish his tarnished reputation, travels to Branfield, MA, to check out a supposed Satanic marking on a cow.  It isn’t, but he hears whispering coming from a forlorn looking tree on the Church property where the cow has wandered and approaches it, finding a creepy antique doll embedded within, one which has been wrapped with chains and dated impossibly as February 31, 1845.  He smashes its porcelain head to fabricate a connection to the cow, but a far bigger story falls in his lap when Father Hagan’s (William Sadler) deaf niece Alice (Cricket Brown) appears in the middle of the road on his way home, causing him to crash.  She’s suddenly been cured and claims to hear and see ‘The Lady’ in that same tree in “The Unholy.”

Adapting James Herbert’s 1983 horror novel ‘Shrine,’ writer/director Evan Spiliotopoulos makes his feature debut with a clichéd story whose twist, that of the Catholic Church’s complicity in turning a ‘miracle’ into a money making machine, is downplayed in service to the more familiar.  Spiliotopoulos tips his hand with his 1845 set prologue, which tells us ‘The Lady’ is not the Virgin Mary as we witness her horrible death hanging from that tree from her point of view, one of her tormentors a priest holding the aforementioned kern doll.

Bringing Alice to the Church, Fenn is chastised by Dr. Natalie Gates (Katie Aselton), who smells the whiskey on his breath (he had an open bottle in his car) and guffaws when he tells them what she said, the girl supposedly unable to talk.  The next day, at her uncle’s service, Alice suddenly stands, leading a procession out of the chapel to the tree where she has a visitation, then lays her hands on a boy in a wheelchair, enabling him to walk.  Branfield becomes a religious tourist and media hotspot.  Hagan tries to shield his niece, but she, oddly it seems, craves the spotlight in order to get ‘The Lady’s’ message out to the world.  Monsignor Delgarde ("Son of God's" Jesus, Diogo Morgado), a debunker of miracles, arrives, as does Bishop Gyles (Cary Elwes) who seems eager to exploit the situation with his speech on worldwide visitation shrines.

Fenn has a nightmare in which an acrobatic cowled ghoul crosses a stream.  He begins to be disturbed by his interviews with Alice, urged to ‘spread Mary’s word and be rewarded.’  He is surprised to hear Father Hagan quote Martin Luther’s ‘When God builds a Church, the devil builds a chapel next door.’  Fenn confides in Gates, now an ally, about the kern doll and finds out the disturbing meaning of that ‘impossible date.’

The movie, produced by “The Evil Dead’s” Sam Raimi and shot in Sudbury, MA, has a plus in Morgan, a master of reaction shots and above-it-all amusement, and a find in Brown, who gives an intelligent performance and shows off an impressive singing voice.  But the film walks a well worn path with its vengeful female spirit, “The Omen”-like chants and visual ideas copped from films like “Carrie” or 1999’s “The Mummy.”  It is hard not to laugh when Fenn and Gates hit the Church basement to research only to be surrounded by sheet-covered statues.  The requisite jump scares, accompanied by a score turned up to 13, include one made run-of-the-mill on YouTube.  Fiery effects are subpar.  But “The Unholy” disappoints most with ideas suggested and left undeveloped.  Delgarde defines three criteria for declaring a miracle, but when they are met, what then?  The Bishop is obviously complicit but to what degree?  Fenn’s attempt to upsell his story to the publisher who fired him is a subplot which should have been expanded or, better yet, excised entirely.

“The Unholy” isn’t a bad film, it just leans on the mundane at the expense of its more intriguing ideas.

In our household, Laura is the Queen of the Horror Movies and I defer to her choices, trusting her taste, on which ones we are to watch. But, I really do not care for horror flicks and tend to be ambivalent about them, mainly because they are, to me, just more of the same. So, when one of the scary flicks actually interests me, I am surprised.

“The Unholy” is, contrary to my usually cynical dislike of the genre, not awful. Sure, there are clichés galore, but the story of a deaf and mute young woman, Alice (Cricket Brown), who has the vision of the Mother Mary in the small Massachusetts town of Branfield is not the usual cliché. Add to this a discredited reporter, Gerry Fenn (Jeffrey Dean Morgan), who schemes to get the big scoop that puts the rural hamlet on the map of Miracles, and assures him a plum job, reminding me of Billy Wilder’s “Ace in the Hole (1951).”

Why is this horror flick elevated in my mind? I was not insulted as a moviegoer by the usual jump-out-at-you cheap shots (there were some). There is a good build up as the innocence turns to evil and the battle begins. The filmmakers inject originality into what could have been a mediocre scarer and pull it off, at least a little. It helps to have Sam Raime as a producer and a solid cast playing out the story, based on James Herbert’s novel Shrine, that has some smarts to it.