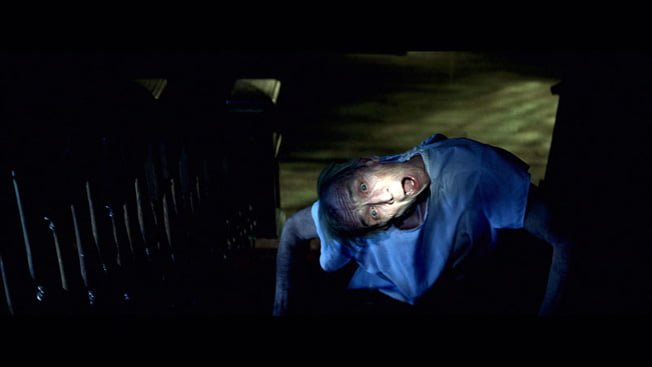 Casey Beldon (Odette Yustman, "Cloverfield") has a weird dream about a creepy kid with a dog in a mask and then finds out she had a twin who died in utero. When the little boy from her dream begins to haunt her during the day, Casey looks for clues in the things left behind by her mother (Carla Gugino, HBO's "Entourage," "Righteous Kill") who went mad and committed suicide when Casey was just a child. An old news clipping leads Casey to holocaust survivor Sofi Kozma (Jane Alexander, "Fur: An Imaginary Portrait of Diane Arbus," HBO's "Tell Me You Love Me"), her grandmother, who tells Casey about the great uncle, Barto (Ethan Cutkosky), who died at the hands of Dr. Mengele only to return possessed by a Dybbuk, "The Unborn."

With the writer/director who brought us "Blade: Trinity" (David S. Goyer, also responsible for story on "The Dark Knight"); stars like Gary Oldman ("The Dark Knight"), Jane Alexander and James Remar ("Blade: Trinity," "Pineapple Express") and a pretty creepy trailer, there was the smallest hope that "The Unborn" could turn out to be not half bad, despite an early January release date. But "The Unborn" plays like "Mirrors" crossed with "The Boys from Brazil" and "The Exorcist," often, as if played for laughs. At least I got to see Gary Oldman, as Rabbi Sendak, blow the sacred animal horn. It's a pity really, because "The Unborn" might have been interesting if Goyer had stuck with the unborn twin haunting instead of muddying up things with his far less interesting Dybbuk, that spirit which, denied heaven, is looking for a body to return to Earth with. There is a family history of twins but no real reason why the Dybbuk would persist bugging the same family unsuccessfully over generations. And why is the creepy little boy next door holding up a mirror to his baby sister if the Dybbuk is really after the twenty-something Casey? It's laughably convenient how much dad travels, leaving Casey alone in their huge old house, and how a series of the Dybbuk's targets continue to investigate when their lamps, then their overhead lights, then even their flashlights stop working. The climatic exorcism scene needs ten people (it's a Jewish thing) to work, but they quickly all become fodder, including Casey's too-good-to-be-true boyfriend Mark (Cam Gigandet, "Twilight's" bad vampire). Where's Father Merrin would you need him? Yustman, featured in revealing undies and a shower shot, will be bait for the fanboys and Oldman and Alexander should walk away unscathed, but "The Unborn" gives none of the actors much to work with. One wonders what drew people like Gugino and Alexander to this project (Oldman and Remar have worked with Goyer previously). Meagan Good ("The Love Guru," "Saw V") is decent as Casey's best friend and young Atticus Shaffer ("Hancock") is genuinely creepy as Matty. As the twin/Dybbuk, Cutkosky is more a special effect than anything. The fx guys do some pretty good work, too, fashioning up an evil messenger dog that has its head on upside down. They also use (aka blatantly steal) the "The Exorcist's" notorious, excised spiderwalk trick on a catatonic, paralyzed senior (they go overboard on the latter when the actor is removed from the mix and the effect looks fake). "The Unborn" isn't as awful as many horror films, but one cannot help but feel let down by Goyer - he had something and failed to develop it correctly or direct what he had to maximize scares.