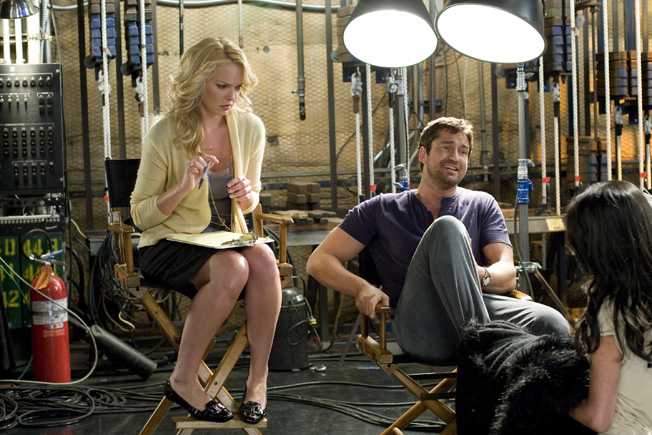 Chauvinistic field reporter Mike (Gerard Butler, "300," "P.S. I Love You") thinks he is helping his morning show producer Abby (Katherine Heigl, "Knocked Up") find love by putting her in situations which prove his relationship theories, but eventually he will be forced to face "The Ugly Truth."

A screenplay from Karen McCullah Lutz and Kirsten Smith ("The House Bunny," whose main merit was star Faris) from a story by newcomer Nicole Eastman directed by Robert Luketic ("Legally Blond," "21") and starring Katherine Heigl didn't exactly sound appealing. Gerard Butler is a good actor who has made some iffy choices as well. But "The Ugly Truth" turns out to be not half bad, a bag mixed with a good running gag weaving around mechanical romcom cliches played out with charisma by Butler and featuring Heigl in agreeable mode. Abby is an award winning producer of a Sacramento morning show whose ratings are in the toilet. The morning after she's called in to "The Ugly Truth" on cable access to challenge the chauvinistic ravings of non-relationship guy Mike, she's informed that he's been hired for a segment on her show. He kicks things off by analyzing the marriage of coanchors Larry (John Michael Higgins, "For Your Consideration," "Yes Man"), emasculated since his wife has become more successful, and Georgia (Cheryl Hines, "Waitress," HBO's "Curb Your Enthusiasm"), sexually frustrated since leapfrogging over her husband's career. Then he joins two bikini-clad women in a Jello wrestling tub. Abby is beside herself at having to stoop so low, but cannot dismiss the ratings spike. That night, while rescuing cat D'Artagnan from a tree, Abby spies her sexy new neighbor, who ends up having to rescue *her* when she slips. He turns out to be a doctor and just the type of guy she'd described on Mike's call in show. Mike is horrified when she calls the doc for a date the next day and begins to coach her on how to snare him. Even through a series of embarrassing encounters (the requisite junk of such films - food mishaps, "When Harry Met Sally's" deli orgasm scene turned inside out via vibrating underwear), Mike's advice works, but just when she gets what she thought she wanted, Abby has a huge moment of self realization. As "The Ugly Truth" goes through its paces, we learn that Mike can't be such a bad guy after all because a) well, he's helping out Abby and b) he acts very responsibly towards his nephew who lives next door. Then there's the fact that Larry and Georgia seem unable to keep their hands off each other ever since he pointed out what was driving that wedge between them. It's too bad, then, that Abby has to dump drinks on her date and end up on the big screen at a ball game as she swabs his crotch ("The Ugly Truth" is far raunchier than the average romcom) or give a business pitch at dinner while the remote control to her panties is unwittingly manipulated by a young diner at a nearby table. These are the unrealistic situations of situation comedies. The climatic obstacle to the obvious pairing comes in the form of Mike's guest appearance on the Craig Ferguson show (a Scot interviewing a Scot pretending not to be one) which, in reality, is a tryout for a bigger payday on another network which interrupts Abby's 'big' weekend away with Colin (Eric Winter, as deep as a Calvin Klein underwear model). Gerard Butler somehow carves something like a real person out of the character of Mike, his bravado covering years of disappointment. If only he didn't affect his American accent by chewing his words with his upper lip while twisting his mouth sideways, a truly distracting 'acting' tic. Heigl is forced into a lot more antics, but she somehow preserves sympathy and performs a charming ditzy dance whenever things go her way. Heigl injects Abby with a good bit of strength at film's climax, too, plowing through Mike's formerly indisputable confidence. Luketic is a director of plastic films, however, and is incapable of building on what these two bring to the table. The film is photographed with the usual brightly lit yet uninventive shots featured in the genre. A hot air balloon ride at film's end is particularly unconvincing.