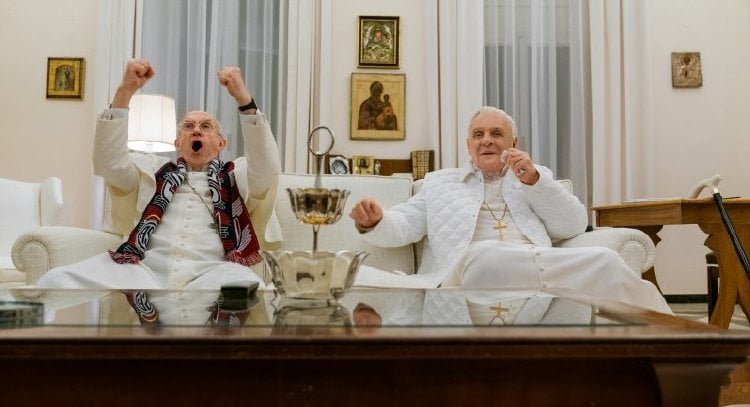 In 2005, Vatican City rejoiced when German Cardinal Joseph Ratzinger (Anthony Hopkins) was announced as Pope Benedict XVI. Seven years later, after a scandal involving leaked Vatican documents, the world was shocked when he became only the second Pope to voluntarily renounce the papacy in 600 years. The very conservative Benedict was succeeded by the progressive Argentinean Cardinal Bergoglio (Jonathan Pryce) who took the name Francis and who would meet three times with Benedict before that as imagined by screenwriter Anthony McCarten ("Darkest Hour") in “The Two Popes.”

And while McCarten took the opposing doctrines of the two men directly from interviews and texts, he has added a number of imagined interludes, like the humble Francis’s ordering pizza from a vending cart outside the Vatican, then, later, sending an aide out to get some for both himself and Benedict, or Francis teaching Benedict how to tango or the two watching a World Cup match between their two home countries together. The film is very dialogue driven as the two men discuss everything from celibacy to failures of leadership. The Church’s sex abuse scandal is, of course, touched upon if not dwelt upon (Francis hears Benedict’s confession, but we do not). McCarten makes Francis the primary player, breaking up current day talks with flashbacks to Bergoglio’s (Juan Minujín) troubled leadership during Argentina’s military junta during the late 70’s and early 80’s.

The main pleasure of “The Two Popes” is watching Hopkins and Pryce play off each other, the two actors absolutely delightful. Hopkins maintains Ratzinger’s hard line beliefs but humanizes the man with a surprising (and perhaps unwarranted) open mindedness about his successor’s ability to lead. He is curious about Bergoglio’s popularity with everyone from the public to his own gardener, stating that no one seems to like him when he’s being himself. Pryce captures Francis’s down to earth humility and awareness of pop culture, allowing subtle jabs at Benedict’s culinary and musical preferences. The actor plays Francis’s attempts at accomplishing everyday tasks, like booking an airline reservation, straight, adding to its comedy.

Director Fernando Meirelles ("City of God") has crafted a beautiful production, reproducing the Sistine Chapel, Vatican interiors and the gardens of the summer residence in stark contrast to Argentina in the 70’s. His two popes are visually distinct, one preferring pomp in costume and ritual, the other rejecting it, as in real life.