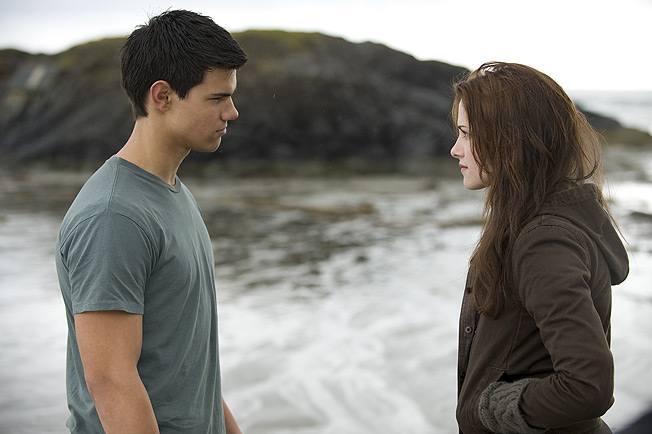 On her eighteenth birthday, Bella Swan (Kristen Stewart, "Into the Wild," "Twilight") is obsessed with aging as her vampire boyfriend Edward Cullen (Robert Pattinson, "Twilight," "Little Ashes") will never look a day older than seventeen. When she cuts herself at a party and Edward's 'brother' Jasper Whitlock (Jackson Rathbone, "Twilight") almost kills her, however, Edward goes all noble and abandons Bella for her own safety, leaving the distraught young woman in the arms of her best friend Jacob Black (Taylor Lautner, "Twilight"), who is about to undergo a change of his own with the "New Moon."

Catherine Hardwicke did such an exemplary job mining what was good out of Stephanie Meyer's first novel that fans were distressed when she did not return for the sequel, but new director Chris Weitz, whose "Golden Compass" experience with CGI created creatures serves him well here with oversized werewolves, carries on with some innovations of his own. As everybody surely knows, the second of the four books which have now been dubbed "The Twilight Saga" creates a love triangle between a vampire and a werewolf with Bella as the prize and in addition to some nifty Weitz visuals, Taylor Lautner, underwhelming in the first film, proves a big surprise in the second. Sadly, though, as Lautner's stock rises, Pattinson's falls. Almost every scene with Edward save one (a literature class) features Pattinson vogueing his way through tortured romance. Edward Cullen the character has been replaced with Edward Cullen, Goth model. Working with a script by Melissa Rosenberg ("Twilight"), Weitz gets several things right, beginning with the dream which opens the book and sets the stage for Bella's aging worries and her growing demand to be made immortal. Once Edward leaves, Bella tries to literally crumple up and die in the woods, but she's found and returned to Chief of Police Charlie Swan (Billy Burke, "Feast of Love," "Twilight") by Sam Uley (Chaske Spencer), who just happens to be shirtless and who shares an unspoken communication with Harry. But when Bella goes out with Jessica (Anna Kendrick, "Twilight," the upcoming "Up in the Air") to appease her dad, she learns that danger brings Edward's spirit out to warn her away from it. Logic dictates she must now become an adrenaline addict in order to see Edward and so she gets Jacob to begin restoring a pair of motorcycles. Then she's helped out when Laurent reappears to kill her for Victoria (Rachelle Lefevre, "Twilight") who wants Bella dead as recompense for Edward killing her mate at the end of the last movie. Jacob disappears and Bella's put into another tailspin, but she's persistent about seeing him and discovers that his strange behavior and odd relationship with Sam is because Sam has been waiting to train the young tribe members who happen to have the werewolf gene. As if that's not enough excitement, Bella decides to give cliff diving a try and Alice Cullen (Ashley Greene, "Twilight") mistakenly 'sees' her death. When Edward finds out his beloved is dead, he turns himself in to the Volturi to end his life and Bella and Alice race to Italy (on Virgin America airlines - ha!) to save him. Stewart grieves well whether she's silent and moaning or screaming in her sleep and she has a knack for making overwrought dialogue sound natural, but this film belongs to Lautner. He's warm and natural and funny and confident and makes a real strong case for Team Jacob ("Twilight" fans were divided on who Bella should end up with before the last book decided things once and for all). Pattinson, whose hair seems flatter than the last time, is artfully arranged all about the place, but Lautner gives Jacob more real passion. Michael Sheen ("Frost/Nixon," "The Damned United") is an absolute hoot as Volturi head Aro and Dakota Fanning ("The Secret Life of Bees") does some lovely subtle work as the pain inflicting Jane. Weitz has some tricks up his sleeve, especially around the cliff diving. When we first see Sam dive the camera follows him upwards as he then dives into the water with no additional camera movement. When Bella jumps later, she's pleased to have survived it, only to get battered under by waves. Beneath the water, Victoria swims towards her like a Great White on speed before Jacob manages to pluck her to safety. (Oh, and Edward's 'spirit' is thrown in their, his hair waving about his face more poetically than Bella's.) The story is a little choppy, giving shorter shrift to both the motorcycle and werewolf transformation aspects than they deserved, but Bella's trip to the movies with Jacob and Mike is an amusing diversion. "The Twilight Saga: New Moon" isn't the surprise that the first film was, something much better than the book itself, and it suffers because of Edward's diminished presence (in both the story and performance senses), but Lautner, who didn't impress me in "Twilight" at all, has come up to the plate big time. The kid's got a career.

OK, no one is going to listen to a 58-year old film critic when it comes to my opinion of “The Twilight Saga: New Moon.” However, I braved the mob of girls and young women who thronged to the chaotic screening (all cell phones were confiscated) so I guess I can have my say. The original entry in this saga, “Twilight” grossed nearly $400 million worldwide. “New Moon” looks to beat that box-office figure and, from the enthusiasm of those I talked to who eagerly anticipate the sequel, it probably will. I walked into seeing “New Moon” with the bare bones prologue provided by my fellow critic, Laura, so I did have a clue as to what is going on. The vampire legend, as begun in Bram Stoker’s Dracula, has, in recent years, been played with by Hollywood. Now, the “children of the night” can come out during the day, they no longer have to feed on the blood of humans and, even, can live in harmony with those they once blood sucked. The vampire is no longer a feared, malevolent being (well, some of the vamps are still bad but that is simply a story convenience these days) and, he (it’s always a he, it seems) can love. In “New Moon,” the hero of the first film, vampire Edward Cullen (Robert Patterson), takes a back seat to the rise of another supernatural being, Jacob Black (Taylor Lautner), whose mission in life is to protect the story’s heroin Bella Swan (Kristen Stewart). Bella is in danger by the bad vampire cult called the Volturi, led by head vamp Aro (Michael Sheen). Vampires and werewolves abound in part two of the “saga” but for me it is, essentially, dull. The film, by Chris Weitz (new to the franchise), consists of interminable two-shot sequences of Bella and Jacob and Bella and Edward that are all talk, talk, talk. These talkie scenes occur at such regular intervals (interspersed with far shorter action sequences), I was able to rest my eyes (since nothing was happening worth watching) and wait for these scenes to end. I opened them only when the well-done supernatural battles between the supernatural creatures of Stephanie Meyers phenomenally popular novels. Since I am not a starry-eyed teenage girl, these action sequences are about all that interest me in “New Moon.” As I said, no one cares what and old curmudgeon film critic has to say. The massive target audience of femmes (who nearly swooned when Edward and the incredibly buff Jacob bare their chests) is going to love “New Moon.” Guys, be warned, this is the quintessential chick flick. The action stuff is the hook to bring in the date crowd but it is really just a love story – with vampires.