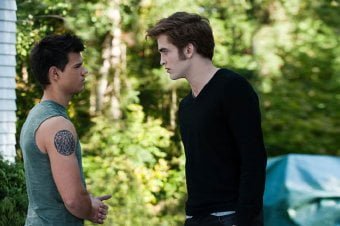 With High School Graduation upon them, Bella Swan (Kristen Stewart) is intent on being turned into a vampire while Edward Cullen (Robert Pattinson) just wants to get married. Jacob Black (Taylor Lautner) is determined to halt both plans. Still, his pack finally makes a historic pact with the Cullens to help defend Bella against the vengeful Victoria, who is building an army of Newborns in nearby Seattle in "The Twilight Saga: Eclipse."

The saga's second installment, "New Moon," was harshly criticized for being inert when the novel it was based on was largely treading water while developing Jacob Black's character. So "Eclipse," with its dual push/pull story lines, spicier love triangle and more plentiful and violent action scenes gives the series a needed jolt. Melissa Rosenberg is back adapting Stephenie Meyer's story which additionally fleshes out the Cullen clan with flashback back stories while deepening the lore and enlarging the circle of shape shifters. Whatever was afflicting Pattinson's performance in "New Moon" has lifted and Lautner continues to further his appeal. Non converts will more than likely think it's weird that no one seems to notice just how odd looking the Cullens are with their paler than pale skin, reddish brown irises and dilated pupils, but they'll be left in the dust anyway as "Eclipse" will only make the most marginal sense to anyone who hasn't seen the first two films. Director David Slade ("Hard Candy," "30 Days of Night") signals a tonal shift by opening with the attack that will make Riley (Xavier Samuel) Victoria's right hand man and a worrisome missing person for Bella's dad Charlie (Billy Burke). The Cullens become alarmed as the Seattle news focuses on possible serial killers or rampaging gangs, activity sure to draw the attention of the Volturis, the cruel coven of vampire rulers. As the climactic battle comes to a head, Jacob keeps making his case to Bella, a case that culminates in the second most revealing camp tent scene since "Brokeback Mountain" and the kiss Bella gives Jacob when he learns of her engagement to Edward (!). There are a few good 'speeches' here, one literal. Jessica (Anna Kendrick, "Up in the Air") gives a valedictorian address that neatly dovetails into the themes of the film, the graduation itself a symbol of the dramatic changes Bella is contemplating in her life. Rosalie (Nikki Reed) explains why she's been so disgusted with Bella's choice and Reed makes the story affecting. There's solid comic timing in Billie Burke's attempt to talk about sexual precaution and in Lautner's retorts regarding Bella's future and Edward's almost admission of friendly regard. Like the television series "True Blood" and "The Vampire Diaries," which are kind of like companion pieces, this new 'season' introduces a number of new characters (as well as a replacement actress in Bryce Dallas Howard taking over the Victoria role). There's Xavier Samuel, of course, but more affecting is Kristen Stewart's "The Messengers" costar Jodelle Ferland as Bree, the Newborn who allows Reaser to once again show off her maternal instincts (Bree's character is the subject of Meyer's recently published novella). Julia Jones is the conflicted Leah Clearwater and BooBoo Stewart (no relation to Kristen) is Seth, the newest and youngest shape shifter. Keep your eyes peeled for Bauhaus's Peter Murphy, who appeared years ago in the vampirific "The Hunger," as The Cold One in a back story flashback. While Slade can't fix everything in the source material, he has made some wise decisions, such as toning down Edward's glitter effect. He gives the fight scenes a real sense of danger and imperilment, the not-quite-sex scenes some hot sexual tension. As usual, the film features a trendy but satisfying soundtrack featuring artists like Muse and Florence and the Machine. So, "The Twilight Saga: Eclipse," mostly works. Now it's up to "Gods and Monsters" director Bill Condon to figure out how to keep the last episode, the two part "Breaking Dawn," from descending into silliness and ickiness.