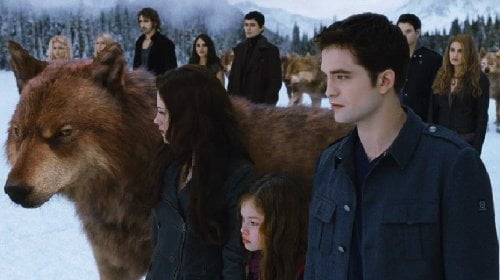 When we last saw Bella Swan (Kristen Stewart), she'd just awoken as a vampire after giving birth to her and husband Edward Cullen's (Robert Pattinson) unique child Renesmee (Mackenzie Foy). Now we've got a rejuvenated Bella, an imprinted Jacob Black (Taylor Lautner) and a pack of Volturi salivating at the chance of getting into a big dust-up over what they mistakenly perceive as a child immortal in "The Twilight Saga: Breaking Dawn Part 2."

The series that has been largely panned by critics yet adored by its fans ends with a surprisingly fun wrap up by director Bill Condon ("Gods and Monsters," "Dreamgirls") and series screenwriter Melissa Rosenberg who had the good sense to let their hair down and not take things so seriously with this final chapter. Condon, who also directed the worst of the series with the previous "Part 1," also gets away with murder with his PG-13 rating here in a shapeshifter and vampire tale that sports no fangs but features a brutally bloody climax as heads literally roll. Summit's marketers could have aped the old 'Garbo Talks!' tagline with 'Stewart Smiles!' for this one as well, as the actress, who has glumly shuffled her way through the first four of these finally wakes up and embraces life. 'I was born to be a vampire,' she says at one point (one of many amusing lines to be found here), and it's true - even those weird red contacts suit her. Stewart seems to be having fun and Pattinson's as relaxed as his crinkly-eyed self has ever been on screen, not always the case in this series. There is hardly a need for a plot summation as anyone outside the Twihards will care, but suffice it to say that one of the Meyers's most ridiculous subplots - Jacob's imprinting on Renesmee - is handled here with enough humor that one can let it ride ('Should I call you dad?' Jacob asks Edward) and that Bella's vampire newness injects energy even if vampire sex doesn't break the bed. Charlie's indoctrination to a supernatural world is also amusing, helped by one of the series' MVPs, Billy Burke and his great reactions. Then Cullen cousin Irina (Maggie Grace, "Taken"), who sees Bella and Jacob out playing with Renesmee from afar, mistakenly blows the whistle to Aro (Michael Sheen, chewing scenery for our delictation) and things get even looppier. Cullen patriarch Carlisle (Peter Facinelli, SHOtime's 'Nurse Jackie') decides that if they gather witnesses from among their friends who will testify that his grandkid wasn't turned but born that Aro will back down. Begin the gathering of the vampire UN, caricatured like an 'It's a Small World' sung for Goths. Amazonians, heavily accented Slavic Russians and cable knit sweater and cap wearing Irish bloodsuckers gather. The filmmakers smartly let slip that this film would hold surprises not found in the book and the climatic battle between Cullens and Volturi must be seen to be believed. I won't say more except that the film pulls off one of the best gotchas in recent memory. It also, unfortunately, leaves plenty of room for the franchise to carry on, but one must appreciate what the filmmakers and cast have pulled off here. A coda to the film, in which Bella lets Edward 'see' her thoughts for the first time is a nice device to rerun flashbacks from prior films. Better, the cast of the entire series is namechecked in the film's closing credits, a classy touch.