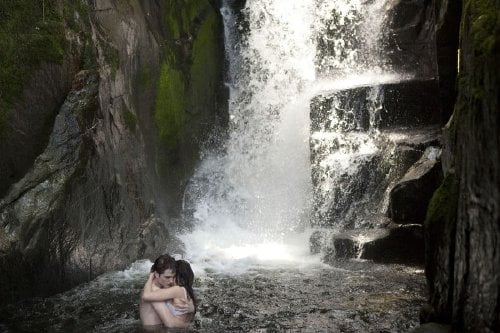 A wedding. Violent sex. A pregnancy. A divide within the wolf pack and the Cullen clan. A baby that draws more attention from afar. Bella Swan is having an unusual first month of marriage, and that's before she says goodbye to humankind in "The Twilight Saga: Breaking Dawn - Part 1." From "Dreamgirls" to dead ghouls, director Bill Condon has all but drained the blood out of this series. The fourth installment of The Twilight Saga is so enervated it's like a dose of Ambien. Considering that this is the book where Stephanie Meyers's sexual repression finally lets rip in a totally weird tale of sexual thrusts so strong they could kill you, birthings that might take place in "The Shining's" elevator and a romantic rival turning potential son-in-law after setting eyes on his beloved's newborn, the movie adaptation is often akin to watching paint dry with lousy CGI effects and a thoroughly insipid musical score. Condon does do a few things right. There's some nice imagery in Bella's pre-wedding nightmare, all red and dead against a stark white background. A wedding toast montage is amusing, especially energized by Anna Kendrick's wistful wisecracking. A long shot of Edward and Bella leaving Rio by boat in the moonlight, a tip of the hat to his "Gods and Monsters" with a "Bride of Frankenstein" movie house flashback, and, perhaps a modern day version of island zombie movies with Brazilian housekeepers in fear for Bella's life at the hands of her newlywed husband. There's a bit of the macabre around that birth scene, too, when its blood coated babe in the arms of a new dad whose mouth is dripping gore. But these things are not enough to sustain a film which is mostly about people, in whichever supernatural form they take, standing around making wooden pronouncements. The native American shapeshifting wolves have never looked more artificial and the 'big scene' where Jacob (Taylor Lautner) proclaims sovereignty over Sam Uley (Taylor Lautner) via telepathy is laughably cheesy. There's no need to go over plot details here, as no one who hasn't read Meyers's books will understand what's going on and even those who have will wonder at such puzzles as a Cullen being instructed to see if Bella's truly turned by listening for her heartbeat. Watching an almost grown man get gobsmacked by the sight of a CGI-enhanced infant is the stuff of comedy, not melodrama. Former films have also at least had an interesting song or two on the soundtrack, but this one has the type of 'happy' music used in horror movies to lull audiences into a stupor before the 'gotcha' that this one never gives. If it ever looked like Robert Pattinson had it made by being cast in these films, that future now looks dire and Lautner's venture outside of the series earlier this year wasn't exactly auspicious either. It's been too long since Stewart's done something else interesting on screen and her anemic Bella performances aren't gaining any momentum. If she doesn't do something radically different as the new, immortal Bella in Part 2, interest may fade fast. "The Twilight Saga: Breaking Dawn - Part 1" is one of the weirdest cinema experiences in recent memory - an extremely high profile franchise film whose makers couldn't be bothered with convincing effects or even continuity (watch Bella's hair and makeup, especially during the endless wedding). It's difficult to imagine how this could possibly come to a satisfying conclusion if it all ends up on the shoulders of a character named Renesmee (Mackenzie Foy in flashforwards). Even the Cullens looked like they were trying to restrain giggles.

We are nearing the end of the Twilight franchise and, like “Harry Potter,” it goes out with the last book divided in two parts for the big screen. Part One, to a non-Twilight fan, is nearly two hours of nothing happening – except for THE PREGNANCY! I am not a fan (I would rather have been home watching reruns of “The Vampire Diaries”) and “Breaking Dawn – Part One” is meant for the fans. The other “Twilight” film I actually saw at the theater was the second one, “New Moon,” and I thought I handled it well. I would close my eyes during the talkie/lovie scenes and doze. When the volume ramped up (as is common in films) I knew the action time was upon me and I watched the vampire/shape shifter stuff. More talk, more dozing. During “Breaking Dawn – Part One,” I found myself dozing – I took notes – for 44 minutes before any noise from the screen could rouse me, and that was only a temporary interlude of Jacob rebelling against authority or something. This “action” bit lasted about four minutes before returning to the boring Bella and equally boring Edward. After that, the film alternates between this dull duo, occasional perversions of the vampire myth, a vengeance war between the vamps (who are generally well-adjusted good guys) and the shape shifters that to only know how to turn into wolves that vary in size, depending on the circumstance and action. Mixed in with this hodge-podge is a “Rosemary’s Baby” (without the Dark Lord) birth that could have been an anxious and taut scene. What happens, though, is anticlimactic. “Part One” actually tries to deal with mature themes, like marriage and having a family but the effort is juvenile, at best, and mostly insipid. While watching the film, sort of, I asked myself the question, “Why do people like these movies?” I reflected on this for about five seconds before I wrote down, “I have no idea!?” Going back through my notes, I found several “OMG!!!s” because of the bad writing (not sure if this is because of Stephenie Meyer’s source material or the screenplay by Melissa Rosenberg or both), bad acting and muddled, scattershot direction by “Dreamgirls” director Bill Condon. I do not want to think about the problems I have with this film, in particular, and the franchise, in general. Nothing I say is going to discourage even one fan from forking out the dough to see this awful (for non-fans) film. Thankfully, the filmmakers do not rip off the fans and go the 3D route. But, will “Part Two” go the same route as the last “Harry Potter” movie to make one last big B.O. killing? We’ll have to wait a year before we find out and, believe me, I can wait even longer. Since it was in focus and lighted OK,