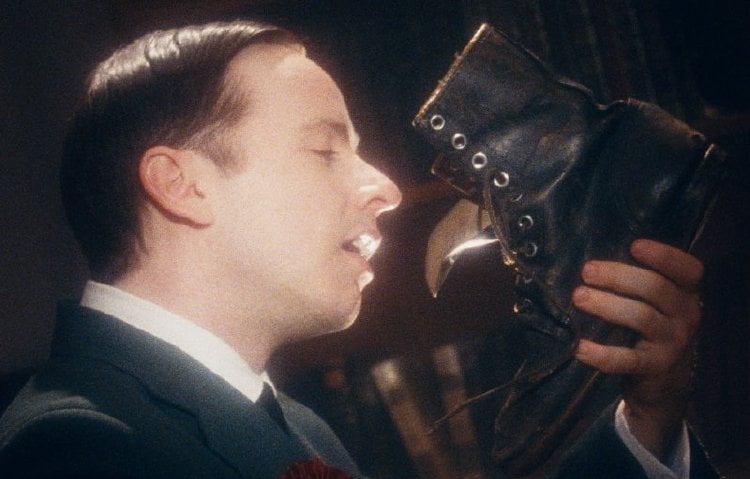 With just a five year gap in the first half of the 1930’s, liberal William Lyon Mackenzie King (Dan Beirne) was Canada’s longest serving Prime Minister between the years of 1921 and 1948.  But while his accomplishments were many, writer/director/editor Matthew Rankin, making his feature directorial debut, makes only the loosest of connections to reality with his delightfully bonkers satire of King’s rise via a series of absurd competitions to vanquish Canadian disappointment in “The Twentieth Century.”

If you are unfamiliar with Canadian history you may want to check out King’s Wikipedia page where you will learn that he actually was close to his mother, didn’t get along with his conservative rival Arthur Meighen (Brent Skagford), that his best friend Henry Albert Harper (here Bert Harper (Mikhaïl Ahooja)) died trying to save a woman who’d fallen through the ice at a skating party and that one of his top aides was Ernest Lapointe who helped bridge the demands of the French Canadians (here depicted as his mother’s nurse, Ernestine LaPointe (Sarianne Cormier), who does indeed champion Tante, a French Canadian mystic, while also falling in love with King).

What Rankin has given us instead is a demanding mother (Guy Maddin regular Louis Negin, "54's" Truman Capote, wearing what looks like a “Whatever Happened to Baby Jane?” wig) who has been bedridden since his effeminate father (Richard Jutras) ‘filled her with semen’ and whose dreams of her son becoming PM and marrying a harp playing woman with a gold plait guides his every action.  King first spies that woman in The Hospital for Defective Children where he regularly visits TB victim Charlotte (Satine Scarlett Montaz).  Having never heard music before, he will continually misidentify Ruby Eliott’s (Catherine St-Laurent) harp as a trumpet.

That rival will compete against King in competitions of Ribbon Cutting, Leg Wrestling and Waiting Your Turn, but while King wins volume-wise in Baby Seal Clubbing, Harper is deemed the winner for his finesse.  Harper also wins the hand of Ruby, leaving King to appreciate the finer qualities of LaPointe despite his mother’s antagonism.  Problems arise when Ruby’s father, Lord Muto (Seán Cullen), requests King attend to his daughter and King is caught by surprise to learn Muto meant his elder daughter Lady Violet (Emmanuel Schwartz, hilariously louche).  Will King leave his fiancée LaPointe on an ice floe as his mother demanded?

That’s barely scratching the surface of everything that goes on here.  While Rankin has clearly studied at the knee of fellow Winnipegger Guy Maddin (who featured a similar series of absurd competitions in “The Forbidden Room” and whose faux silent film style is mirrored here), we can also see influences of everything from David Lynch to Paul Morrissey’s Andy Warhol horrors to the Weirmar decadence of “Cabaret.”  But what happens in Winnipeg doesn’t stay in Winnipeg, here depicted in Chapter Four’s ‘Fleshpots of Winnipeg’ as a red light district of fetishism where King indulges his used boot fetish by buying one of Ruby’s to huff back at home as his oversized cactus ejaculates.

The film, shot on 16mm in Academic ratio, features a series of graphic, three-dimensional backdrops to establish places like the Roxboro Apartments and where we witness King follow Ruby in silhouette as they travel from Toronto’s Bloor Station to Rideau Hall via ski lift.  Moose and red falcons feature in heraldry while puffin cream and maple walnut ice cream receive frequent mentions (as do erect members).  The film is brilliantly edited for split second comic effect and in camera effects.