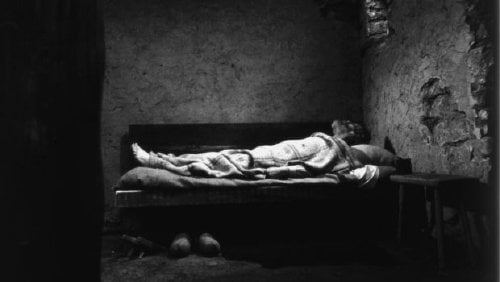 German philosopher Friedrich Nietzsche had a mental breakdown from which he never recovered on January 3, 1889, after trying to protect a horse being beaten by its cab driver. In the film which he has said will be his last, Hungarian filmmaker Béla Tarr ponders Nietzschean thoughts as he wonders what happened to "The Turin Horse."

Using his usual black and white, long take style which has persisted since 1988's "Damnation," Béla Tarr, never known for a cheery outlook, here takes on nothing less than the wretchedness of human existence. The film is stunningly shot by Fred Kelemen, whose camera snakes around the one room interior of the humble home of 58 year-old cab driver Ohlsdorfer (János Derzsi, with a face Albrecht Dürer would have loved) and his daughter (Erika Bók) as the two repeat their chores over six days with decreasing results. Mihály Vig's score ebbs and flows within the film, a circular cello dirge. Anyone in a state of clinical depression would be well advised to avoid this film. The film proper begins immediately after a summation of the historic event told against a black screen. From a low angle in front of the horse (Ricsi) we watch Ohlsdorfer riding home, making good time for a long time (the two and a half hour film is composed of thirty shots). He is undressed down to his long johns by his daughter, then redressed. He sits staring out the window until she announces 'it's ready.' The two eat their daily meal of one boiled potato each, blowing on fingers burned by the hot spud. As the wind howls outside, the two turn off the lamps and go to their beds. Ohlsdorfer notes ominously that this is the first time in his life he's been unable to hear the woodworms 'doing it,' an oddly polite turn of phrase (there is little dialogue in "The Turin Horse," but both employ the world's favorite four letter expletive). This is a joyless life. There is no sign of affection between the father and his daughter. She rises on Day Two and makes her way to their well, where she hauls up two large buckets of water without benefit of a winch. She dresses her father (his right arm hangs lifeless against his side) and the two go out to drag out his cart. But once hitched to it, the horse will not move. The daughter advises her father to stop trying. They undo everything and return inside to do laundry and chop firewood. This isn't the first task that will be undone in what is surely a Sisyphean existence. Relaxation consists of sitting staring straight ahead, sometimes out the window, others not. We wonder about the lot of the horse, shut into a barn alone, until Tarr shuts us in with him on the day five. A neighbor (Mihály Kormos) seeking brandy on Day Two talks of the human cycle of destruction. The next day, a cart of gypsies stop for water - Ohlsdorfer drives them away but an old man gives his daughter a book which discusses the ruination of a holy place. On day five, Ohlsdorfer's daughter makes a distressing discovery - did those gypsies also leave a curse? If one were to take the four films he collaborated on with writer László Krasznahorkai, one would discover a quartet all tied to the animal kingdom - "Damnation's" packs of stray dogs, "Satantango's" cows, "Werckmeister's" whale, and now, "Turin's" horse. Is this a link to God in nature? Despair, though, isn't a heavenly condition and this horse knows before its humans when to stop beating a dead one.