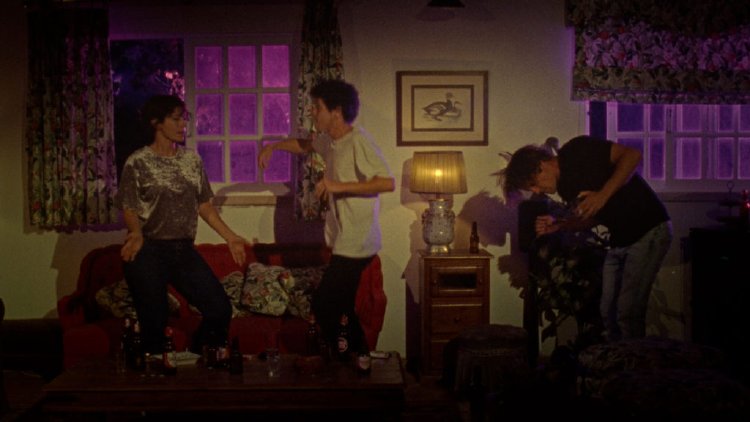 It’s Day 22 as we watch Crista (Crista Alfaiate, "Arabian Nights"), Carloto (Carloto Cotta, "Tabu," "Diamantino") and João (João Nunes Monteiro) dancing deliriously to ‘The Night' by Frankie Valli and the Four Seasons.  It will not be until we move back to Day 14 that we realize these are not the only three inhabiting this sprawling Portuguese home and another two days before that when we learn we are watching a movie being filmed during the pandemic by writer (with Mariana Ricardo)/directors Maureen Fazendeiro, Miguel Gomes ("Tabu," "Arabian Nights"), all playing themselves, in “The Tsugua Diaries.”

Just when you think pandemic movies have become about as welcome as another found footage retread, along comes a Portuguese filmmaking couple to not only surprise, but delight us with one.  “The Tsugua Diaries” (look at Tsugua backwards) is charming and playful while also exploring the dynamics of collaborative filmmaking and the often magical effect of following whims.  And yes, the pandemic comes into play, gradually, an ‘early’ kiss more surprising when one learns about one of the participant’s concerns about her costar, the same actor angering the entire crew because of his chosen recreation over a weekend.  The film’s earliest days later in the film will feature a Portuguese Film Commission representative outfitted in what looks like a Hazmat suit outlining rules and regulations, the following of which appear to have wobbled over time.

Initially the film appears to be about a love triangle, Carloto stopped dead in his tracks by the sight of Crista kissing João, the two joining him the next day in the back of the van he’s slept in with yellow lab mix Gurue (if we’re surprised by the number of people revealed to be on site, so too will we be surprised at the dog-friendliness of the shoot).  Crista proposes a party, but we will also see her gathering fruit and wandering around a lush enclosure.  This structure, a butterfly house, was built over the previous days, one of the many projects and chores taken on by the three costars.

At one point, the three actors face the filmmakers, Crista taking lead on voicing their frustration about a lack of character definition.  Miguel tells them they are doing exactly what they want and we’ve already witnessed how intriguing their approach has been.   Miguel, whose life partner Maureen’s pregnancy has taken her away from the physical set, will walk through a field telling screenwriter Mariana about a beautiful tractor he’s seen and wants to use – a tractor we’ve seen used twice in two wildly different scenes, one comical, the other dreamily enchanting, cinematographer Mário Castanheira employing slow motion to excellent effect.  Shooting in 16mm, Castanheira gives us both an audience’s perspective of a sun-dappled love scene and an actor’s point of view skateboarding through a house also serving as wardrobe and props storage.  Cutaways to fruit both ripe and rotten illustrate the intensity of late summer.

At one point, Gomes must leave to accompany Maureen to an ultrasound appointment and he instructs his cast to direct themselves.  Cut to the three drinking champagne in a bubble bath like something out of a French New Wave film.  Carloto suggests they are wasting film, but the scene is no less relevant than them cleaning or using the swimming pool.

“The Tsugua Diaries” is experimental and thought provoking while never being a chore to sit through – it is the very opposite, a surprise like the outdoor assembly line washing of dogs around every corner.  This Portuguese cast and crew have given us a true original and one of the best films of the year.

Under the warm Portuguese sun, Crista (Crista Alfaiate), Carloto (Carloto Cotta) and Joao (Joao Nunes Monteiro) live a rustic life doing chores and building a butterfly house. But, as time rolls back, the rural life takes on a very different energy during the COVID pandemic in “The Tsugua Diaries.”

I knew that co-directors and co-writers Maureen Fazandeiro and Miguel Gomez had made a COVID movie about making a movie during COVID, and that was about it. So, when the story begins with the chapter, “Day 22,” I had an idea of the filmmakers’ idea of what “The Tsugua Diaries” is.
As the chapter says, we are at the end of the story with the three young people doing their chores and living life. Then, “Day 21” brings us to the day before and we see their numerous projects in the earlier stages and a bowl of rotting fruit.

This journey back in time slowly reveals that we are amongst the cast and crew of a movie in production. As the pages of the calendar (figuratively) drop away, the numbers of the cast and crew increase and we watch a movie being made. The device of time moving backwards is intriguing – “Memento (2000)” also traveled backwards in a very different way – but, here, not always satisfying.
We get to know the principle trio of characters quite well as they become fully fleshed out as time rolls back. But, the device of back tracking and introducing characters without the luxury of developing any besides Crista, Carloto and Joao get me at a distance.

I found “The Tsugua Diaries” to be a technically interesting filmmaking concept but that same concept kept me at arm’s length and not embracing it. It is interesting, though

KimStim opened “The Tsugua Diaries” in select theaters on 5/27/22 – click here for play dates.  It begins its streaming premiere on Mubi on August 26.