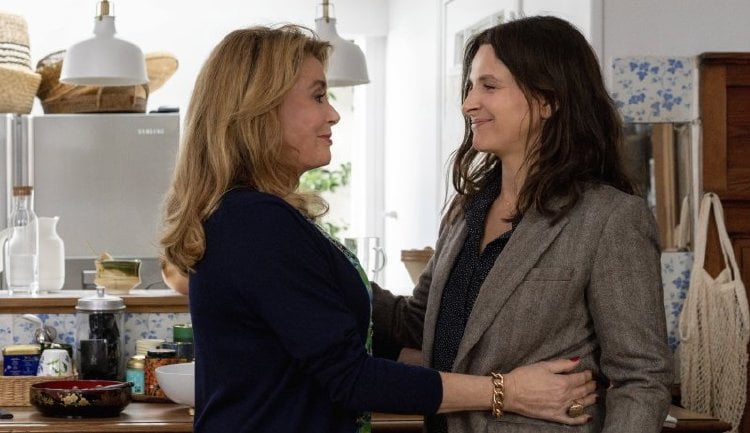 Along with her American television actor husband Hank (Ethan Hawke) and their young daughter Charlotte (Clémentine Grenier), Lumir (Juliette Binoche)            arrives in Paris to visit her famous mother just as Fabienne Dangeville’s (Catherine Deneuve) memoirs have been published.  Their prickly relationship will be tested as Lumir takes issue with her mother’s portrayals, but set visits to Fabienne’s sci-fi mother/daughter movie will help them arrive at “The Truth.”

Cowriter (with Ken Liu)/editor/director Hirokazu Kore-eda’s ("Nobody Knows," "Shoplifters") first film shot outside of his native Japan may be in a different language (French and English), but his constant theme of family dynamics is upheld, here told for the first time via the arts.  While the film is less even than his strongest films, Ethan Hawke, in particular, being somewhat lost in the shuffle, Kore-eda’s given a gift to Deneuve, who makes what so easily could have fallen into cliché relatably complex.

The film opens with the still stunning actress taking a pot shot during an interview only to be reminded by her assistant Luc (Alain Libolt) that the woman she’s just called a whore is still alive. But is it a slippery memory or vanity that causes her to double her book sales when speaking to Lumir?  Clearly a third motivation is responsible for having neglected to ensure Lumir received the advance manuscript she was promised and the daughter is quick to condemn an early passage featuring fond memories of picking her up at school Lumir says never happened.  She also begins to bring up a Sarah, someone Lumir implies her mom should feel awfully guilty about.

It is the never seen Sarah who is the bridge from Fabienne’s (‘don’t call me mom’) stately old home to her movie set, the actress stating that she took her role because the film’s star, Manon Lenoir (Manon Clavel), is said to be ‘the next Sarah.’  On set, it is easy to see that the older actress is intimidated by the younger, unsure of herself in one of many instances of her time traveling film paralleling reality. At home, her granddaughter brushes her hair as Fabi notes that Lumir wouldn’t allow hers to be touched.  Charlotte notes her grandmother’s familiar scent.  Both details are echoed in “Memories of My Mother.”

Denueve compels here – vain, insecure, self-centered and condescending - yet somehow still lovable.  We see the latter through the eyes of her husband Jacques (Christian Crahay), whose warmth and new interests in Italian cooking make their manse welcoming, their bed a haven.  Lumir’s father, Pierre (Roger Van Hool), drops by for a visit, but his presence is never far, Fabienne’s garden turtle named after him.  Binoche mostly plays exasperated, calmer when Deneuve is off screen, young Grenier a solid link between them (Kore-eda has always had a knack for eliciting natural performances from children).  If Binoche is agitated by what her mom’s book has to say about her, Libolt beautifully expresses the hurt at not being mentioned at all, his boss’s complete lack of knowledge about his family his final straw.  Clavel is a solid foil as the younger actress seen as rival but acting as champion.  Hawke is a little too easy going as the American actor charmed by his insulting mother-in-law.  The film also features “Swimming Pool’s” Ludivine Sagnier.

We’ve all seen the tale of an aging actress chafing against younger competition, but Kore-eda’s found a new twist using his old tricks.  “The Truth” presents a mystery, teasing out details, only to reveal an age old human insecurity.

Fabienne (Catherine Deneuve) is an icon of French cinema that has a tell-all memoire about to hit the streets. Her daughter, Lumir (Juliette Binoche(, arrives from the US with her husband, Hank (Ethan Hawke), and young daughter, Charlotte (Clementine Grenier), in tow. She is there for a promised first look at the book that is supposed to tell, but only skirts, “The Truth.”

This is Japanese director Hirokazu Koreeda’s first foray in a language not his own and the result is a solid, oft-funny mother-daughter tale. Fabienne still wallows in the glories of her passed life as a star at the top of her form. She thinks she is still the great actor of her past but there are chinks in her armor, like not remembering her lines in her latest movie, a sci-fi drama about a woman who never ages. Fabienne is not the star.

Long ago, Lumir, now a screenwriter in the US and a happily married mom, eschewed even the idea of becoming an actress, mainly because of her mom and her domineering and self-centered sense of entitlement. And, as she takes her first look at Fabienne’s fate accompli book, called The Truth, she finds the things she reads about herself and her life growing up in the shadow of her famous mother are anything but the truth.

The story, by Koreeda, and a film-in-film story by Ken Liu, feels very French, which is a surprise to me as the filmmaker puts a definite Japanese imprint on his other films. Here is a more generic work as the filmmaker flexes his international muscle directing two of France’s most iconic film stars. I think the “Frenchness” of the movie is due, in a big part, to Deneuve (and, to a lesser degree, Binoche). She imbues the spirit of the nation, usually with a caustic snobbery against things not French, like her American son-in-law, Hank.

The stars of “The Truth, “ Deneuve and Binoche, are a pleasure to watch play off of each other. You get a genuine feeling of the relationship between the prima donna actress and her long in-the-shadows daughter. You get the feeling, frequently, that Lumir had to be the adult in the room when it came to her mom’s fame, with two solid character studies - from two great actors - for the price of one. Note that Clementine Grenier, as Lumir’s daughter, is a natural on the screen.

I have seen “The Truth” described as a drama, but I do not see it as dramatic. There is more humor, especially by Deneuve as the often caustic and self centered thespian, than drama as Fabienne continues to manipulate those around her to her will. Lumir, who has spent a lifetime knowing her mother, is wise to the machinations and will have none of it. It is fun to watch the veteran thesps together.