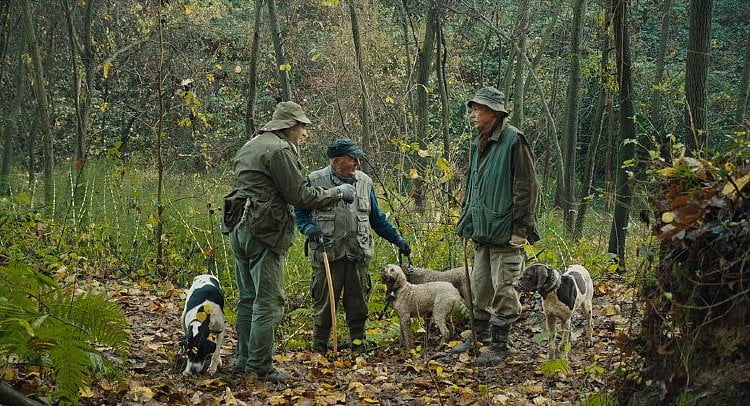 One of the culinary world’s most prized ingredients is only found in Italy’s northwestern Piedmont area.  Climate change is wrecking havoc on its natural environment.   It has never been successfully cultivated and knowledge of the particular oak trees whose roots harbor it is such a closely held secret, fathers will not even share it with sons.  These men are now mostly elderly, a dying breed whose entire way of life is slower, devoid of technology and respectful of nature.  They have an uncommon love of the dogs who are their partners, animals now endangered by the intense rivalries of their trade.  They are “The Truffle Hunters.”

"The Last Race" producer/cinematographer/directors Michael Dweck and Gregory Kershaw came upon their subject when each unbeknownst to the other spent time in the Italian region and came to love it.  While their film could have used a little more structure, they have successfully gained the trust of their subjects, giving their audience intimate access to these men who are so secretive about their livelihood.  That they have chosen to emphasize the joy of the hunt, the affection between dog and master and the blissful enjoyment of the white Alba truffle, their camerawork illustrating the magical qualities of the region, overshadows the warnings threaded throughout the film but makes for a more enjoyable viewing experience.

We do hear from former hunters like 78 year-old Angelo Gagliardi, who furiously types away on his old manual machine when he’s not receiving visitors at his remote home, about why he no longer searches for truffles.  We also witness truffle trader Gianfranco Curti trying to convince a hunter in his late 80’s to pass on his knowledge before it is lost (unsuccessfully), when he’s not buying and selling the precious commodity.  But the film is positively endearing when it spends time with 84 year-old Aurelio Conterno, who shares his truffled meals with Birba, the dog he loves so much his only rationale for finding a woman is so that Birba will have someone to look after it when he’s gone.  88 year-old Carlo Gonella’s wife Maria begs him to stop hunting, especially at night, before he harms himself, but he’s so addicted we witness him climbing out a window with his dog Titina in the dead of night.  While we see many of these men calling for their dogs, who obediently return, shots of Maria calling ‘Carlo!’ in the back of her house to returning silence are endlessly amusing.  The most balance in the good and evil of the current truffle hunting scene is offered up by 68 year-old Sergio Cauda, an old hippie who enjoys playing the drums outside when he’s not sharing his bathtub with his famed English Pointer Fiona.  While it may be nerve-wracking to watch him dry the dog in the tub with an electric hair dryer (!), it is more distressing to see him having Fiona fitted for a muzzle to keep her from ingesting poison laid out by rival hunters.  (Fiona has also been fitted out with a miniature camera head harness and lavaliere so that we may enjoy the experience of hunting truffles from her point of view.)

Authenticator Paulo Stacchin gives an on-the-job overview of what makes for a prized truffle, rejecting those which have holes or still contain too much dirt.  Aroma is a major indication of quality.  Later Stacchin sits in a dining room, a waiter slicing a seemingly endless pile of truffle onto his plate, a simple dish of fresh eggs turned into haute cuisine.

Foodies, travelers and dog lovers will all find something to love in “The Truffle Hunters.”  We can only hope it doesn’t become a historical document anytime soon.

Deep in the woods of northern Italy, a group of elderly men with their trusty dogs seek out that most precious of culinary delights – the internationally sought Alba white truffle. These aged souls scour their woods and forests at night to protect the secret of “The Truffle Hunters.”

Writer-director team of Michael Dweck and Gregory Kershaw present us with the charming, and little known, tale of a very import job, in the culinary world, performed by old men and their loyal canine partners. Their story, though it is the best part of the film, is not just about these very special hunters. It is about an entire industry of discovering and purveying the delicate morsels that sell for $4000, $5000 or even more for a single kilogram of the desirable fungi.

We also get to see the buyers making deals with their elderly hunters, then the dealers selling to their exclusive purveyors and, finally, a rather portly gentleman sitting in front of a plate of fried eggs patiently waiting for the final touch, a whole bunch of shaved Alba truffles covering his meal. “It’s good,” he declares.

The nuts and bolts of the truffle industry is interesting and educational to watch, but the real draw to “The Truffle Hunters” are the old, reclusive loners plying their trade with their beloved dogs showing them the way to their precious truffles. But, the secrecy with which these unique gatherers jealously guard their skills and territory against greedy intruders may mean the end to their chosen, ancient craft.

Sony Picture Classics opened "The Truffle Hunters" in theaters on 3/5/21.