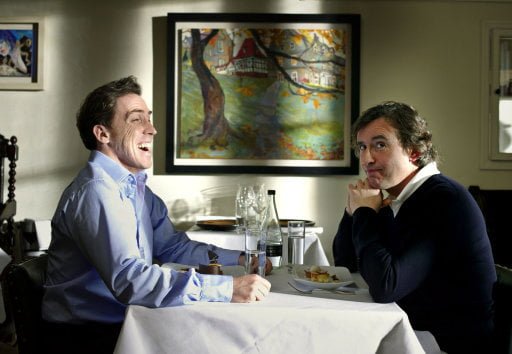 Comic actor Steve Coogan agrees to accompany his girlfriend on an assignment to visit and review fine restaurants in the north of England. At the last minute, Mischa (Margo Stilley), changes her mind and Steve must find another travel companion. He tries everyone he knows but they are all too busy. His last hope is fellow actor and friend Rob Braydon who just so happens to be not busy at all. The pair sets of for the North, trading impersonations of famous actors and bickering all the way during “The Trip.”

In 2005, Michael Winterbottom ("The Killer Inside Me") tackled the 18th century novel Tristram Shandy as "Tristram Shandy: A Cock and Bull Story," where Steve Coogan bickered with costar Rob Brydon as themselves when the movie within the movie's cameras weren't rolling. The two were reunited in an odd couple road movie sequel of sorts as a five part BBC2 series in England where Coogan, offered a gig reviewing fine dining in six inns throughout the Lake District and Yorkshire by the Observer, must find a traveling companion when his girlfriend abruptly leaves the country. Brydon's surprised to hear from his colleague, who admits rather uncomfortably that he was far from his second choice, but agrees to go along as a last minute substitute on "The Trip." This largely improvised mockumentary has been culled down from its British television airing into a 111 minute theatrical release that leaves us begging for more of the original. Coogan has made his name playing largely unlikable fellows like Alan Partridge, a fame obsessed TV host, and here, as in "Tristram," he plays himself much the same - outer arrogance shielding a bundle of insecurity. To his right is Brydon, a sketch comic with a talent for voices, like his 'small man in a box,' who plays himself as a secure family man who finds Coogan to be a bit of a pill but puts up with him more or less. He also frequently and continually bests Coogan with better impressions and a far more extensive literary range, reciting plays and poetry. Right off the bat, Coogan overplays his hand, acting like the stylish area they are traveling through is where he's from, 'the North,' but Manchester, the world of '24 Hour Party People,' is hardly the pastoral countryside represented here (Coogan plays Joy Division on the car's CD player, a tip of the hat to Winterbottom's film in which the two also costarred; later the two break into Kate Bush's 'Wuthering Heights' when faced with some misty moors.). Everything's a struggle for Steve, who battles cell phone reception trying to reach Mischa (Margo Stilley, "9 Songs") in America. Typical of his character, although Steve is terrified that Mischa will leave him, he tries to bed every attractive woman who crosses his path. Rob observes and goes with the flow, enjoying the food and trying to make do with the company. When they stop at a geological site, Rob complains about Steve's running discourse, then Steve himself experiences the same from a stranger and begins to see himself from the outside in. Later, Rob challenges Steve's priority to family over career and startles the man into recognizing his warped values. The travelogue piece of the film is terrific, although it is evident that the meals themselves gradually lose prominence in the theatrical version as the journey progresses. Dinner conversation has made many compare this film to "My Dinner With Andre," but rather than that film's meandering explorations this one is a series of oneupmanships and duets, often with impressions of Michael Caine, Sean Connery, Ray Winstone, Woody Allen and the like (Brydon's impression of Michael Caine aging within one soliloquy is genius). Winterbottom wraps his film with his traveling companions each ensconced back in their natural habitats - Brydon in a warm family home, Coogan in an antiseptic modern hi-rise - and the contrast speaks volumes.

Michael Winterbottom is an eclectic helmer whose career has spanned two decades and directed such films as “24 Hour Party People,” “In This World,” “Tristam Shandy: A Cock and Bull Story” and “A Mighty Heart.” With “The Trip, he crosses “My Dinner with Andre,” “Sideways” and “Local Hero” and effortlessly juggles the essence of these fine films. The result is a showcase for Coogan and Braydon as they ride the rural roads of northern England’s Lake District and Yorkshire Dales, stopping along the way in quaint towns where the spend the night and sample the fine restaurants. This could have been a dozer with just talk, talk, talk. However, the smart improvised dialog includes brilliant impersonations of such notables as Richard Burton, Sean Connery, Woody Allen, Billy Connelly, Michael Sheen, Al Pacino and, especially, Michael Caine. The two comedians constantly try to out do each other impersonating these great voices and Rob Braydon wins with spot-on mimicry of Michael Caine’s voice from as a young actor all the way to his Albert character in the “Dark Knight” movies. This battle of the voices provides and sustains out loud laughs through the whole movie. Steve Coogan quest to find a clear cell phone signal to call Mischa or his agent is also carried through, showing his frustration with modern technology. Techs are first rate with Ben Smithard providing a wonderful travelogue look at the beautiful, quaint North countryside. Director Winterbottom briskly paces his funny road trip and allows his stars to shine brightly as they exercise their comic muscle. The documentary style, a trademark in many of his films, is a plus here, too.