The Trip to Spain 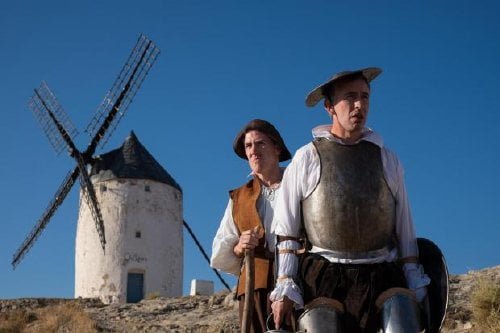 Ultra competitive buddies Steve Coogan and Rob Brydon hit the road for a third culinary adventure that begins in Santander and ends, at least for one of them, in Malaga in "The Trip to Spain." Director Michael Winterbottom ("24 Hour Party People," "The Trip") said he'd never make another one of these after "The Trip" to the Lakes District of England, then doubled down after "The Trip to Italy." But he's found a formula that works - map out a road trip based on fabulous restaurants with dollops of literature and culture and let his two stars spar. There is still plenty of fun to be had with these two and their dueling impressions, especially with Brydon taking the piss out of Coogan's new status as an Oscar nominee (for adapting "Philomena," which he also costarred in with Judi Dench), but this one focuses far less on the food and accommodations than the previous installments. ("The Trip to Spain," like "The Trip," was originally aired on British television in six episodes which undoubtedly focus more on the dining.) The Spanish Inquisition and Don Quixote provide lots of fodder, the former giving rise to Monty Python impressions, the latter finding the lads in costume mounted on donkeys for a publicity shoot. 'The Windmills of Your Mind' does double duty as a reference to the latter as well as the thoughts of mortality that hound these two. After a ferry ride, the two enjoy simply prepared seafood at Txoko, but a sudden rainstorm causes havoc in the open air space. At Etxebarri, barbecue is the speciality, but Coogan hones in on their 'life affirming' butter. Brydon apes Mick Jagger aping his own Michael Caine impression only to be schooled in Jagger by Coogan. A dish of two grilled scallops turns into a James Bond scene. Brydon counters Coogan's vocalization of a faulty hearing aid with his Little Man in a Box only to have it backhanded as the 'apotheosis of your career.' Coogan's response to Brydon's story that David Bowie almost said his name during a radio interview and followed him on Twitter? 'He's ever so slightly diminished now.' Still, as enjoyable as the film can be, it is difficult not to feel the bloom has come off the rose a bit. The first film was fresh, the second shaking things up a bit by trading the men's focus on womanizing and family. The third is merely more of the same. At least "The Trip to Spain" wraps on another continent entirely, a good place to start should these traveling companions take another spin. Grade:

Okay. We have been here twice before, first in 2010 with “The Trip,” in which circumstance throws Coogan and Braydon together in a car driving across Northern England, sampling the local cuisine and culture while bantering with non-stop impersonations of Sean Connery, Michael Caine and many more personalities. It was so much fun that director Michael Winterbottom and his stars reteamed and took to the road, again, for “The Trip to Italy.” More of the same ensues and more rapid fire impersonations are punctuated with the delicious looking cuisine and travels around the lush Italian countryside. But, it was more of the same and gave diminishing returns. “The Trip to Spain” is, of course, a continuation of the series, this time to the varied landscape and foods of that country. The boys continue their battle of the voices as the comedians try to outdo each other with their knock off impersonations. Spot on mimicry of Connery and Caine are, of course, reprised, plus we get Mick Jagger, Rex Harrison, Ian McKellen, the Small Guy in a Box, John Hurt, David Bowie (in voice and song), Marlon Brando (as Torquemada of Spanish Inquisition fame), Al Pacino and some that I forgot. The impersonation competitions, even now, are still fun to watch. Where the previous entries in the franchise gave a good feel of the preparation and presentation of the succulent dishes Steve and Rob enjoyed – as I, vicariously and with watering mouth, did, too – “The Trip to Spain” handles the dining experience in a perfunctory, travelogue way. You like traveling with these guys, but sometimes they need to give us space.