The Trip to Italy 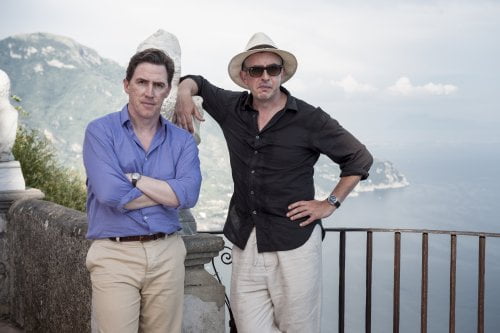 In 2010, Steve Coogan and Rob Brydon explored England’s northern Lakes district and sampled the culinary delights of the region in “The Trip.” Director Michael Winterbottom pairs these two comedians once again, but this time it is “The Trip to Italy.”

Three years ago, Steve Coogan got an Observor assignment to write a series of food and travel articles on England's Lake District and he got comic Rob Brydon to share the trip with him. Now Brydon, who we learn ended up doing Coogan's work the last time, has gotten the call to do the same in Italy and so the two take off on all expenses paid trip, following the path of Romantic poets Byron and Shelley's grand tour in "The Trip to Italy." If Joy Division and Kate Bush was the soundtrack to their northern English tour, this time around Coogan's become obsessed with Alanis Morisette's 'Jagged Little Pill, particularly impressed because second albums are 'always a damp squib, like making a sequel.' It's amusing watching Coogan finding his inner angsty teenaged girl, but he seems like he's mostly along for the ride this time around, leaving the heavy lifting to Brydon, at least until nearer trip's end. "The Trip to Italy" is far from a damp squib, but a little travel fatigue is settling in. If a third outing is being considered, France may seem inevitable but it would be far funnier to send these guys to Oktoberfest to clash with the Germans! Writer/director Michael Winterbottom ("24 Hour Party People," "The Trip") maybe considers these films a vacation himself, largely capturing stunning scenery while winding up his two stars and letting them go (although that said, having driven the Amalfi Coast the logistics of filming on those roads gives one pause). We get more Michael Caine impersonations with garbled "Dark Knight" Christian Bale and Tom Hardy takes. Throw in some Hugh Grant, Robert De Niro, Al Pacino and several iterations of James Bond for good measure. There's also more literary talk, not only on the poets whose footsteps they follow, but Capote and Vidal. While this sounds like recycling, some of it is side splitting, as is quick-witted punning on such things as a woman's gait and kumquats(!). Brydon does a stunningly different take on his 'little man in a box' routine as he voices a Pompeii mummy encased in glass, a gag that makes Coogan melancholy, as does news that Brydon's bagged a role in a Michael Mann gangster film (let the "Godfather" inspired nightmares begin!). Other films begin to haunt this one, as we get riffs on locations used "Beat the Devil," "Voyage to Italy" and "Contempt," "Roman Holiday" for its overall spirit. But although the restaurants, hotels and vistas are glorious, one wishes for a bit more focus on the culinary - an early meal is described in detail - in Italian - while those that follow are mostly props (exceptions - an unplanned stop at an old trattoria and a group meal on Capri, Winterbottom cross cutting between dining conversation and a kitchen lovingly turning out local produce in time honored fashion). By film's end, the two men seem to have switched places, Brydon's happy home life as portrayed in the first now ceding to middle-aged temptation while Coogan attempts to bring his family closer. Death and how we are remembered is a constant theme - maybe Winterbottom had a master plan after all. Grade:

When I heard about “The Trip to Italy,” I was all excited to see Coogan and Brydon taking to the road once again. While I cannot say that I was disappointed in this “Trip,” it lacks the originality and freshness of the first. This comes as no surprise considering it is a sequel. It does what sequels do, it gives more of the same. On this road trip to beautiful Italy, Rob Brydon is the driving force after being asked to write a series of restaurant reviews from such lovely locales as Liguria, Tuscany, Rome, the Amalfi Coast and Capri. Coogan tags along on this excursion and the odd couple drives their rented Mini Cooper around the Italian countryside, again trying to out do each other with their impersonations of Michael Caine, Sean Connery, Hugh Grant and Tom Hardy as Bane from “The Dark Knight Rises.” The battles of wits that packed the first “Trip” are more scattered here as we learn of Steve and Rob’s personal woes – Steve is trying to get back together with his estranged son, Joe (Timothy Leach), while Rob is having problems in his relationship with his wife Sally (Rebecca Johnson). Still, all of the improvised impersonations are amusing and some brought tears to my eyes with laughter – though not as much as “The Trip.” “The Trip to Italy” may be a retread but the travelogue factor, which was high in the first one, goes through the roof as we journey from one lovely Italian landscape to another. The food, and its preparation, so prominent in “The Trip,” are less so here. It looks all tasty enough but the reason for this trip – reviewing fine Italian restaurants – takes a back seat to our boys’ banter. Rob Brydon gets the bulk of the laughs in this new “Trip,” going overboard at times with his questionable public behavior. Steve Coogan is far more subdued when compared to Brydon’s man-child performance. But, both are funny as all get out and it is a pleasure watching them ply their comedic trade. It is when they get serious and move away from the buddy road trip that brings “The Trip to Italy” down a notch.