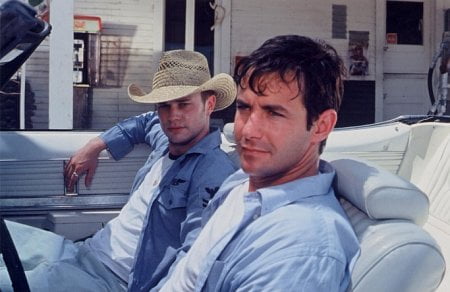 Alan (Larry Sullivan, "Rush Hour"), an avowed heterosexual Republican writing a book about homosexuality, meets Tommy (Steve Braun), a gay rights activist at the home of older lawyer Peter (Ray Baker, "Sweet November") and sparks fly. After some false starts, the duo become a couple and Alan is relieved to hear his book will not be published. Four years later, at the height of Anita Bryant's 1977 campaign against homosexuality, Peter, who always had his own eye on Alan, gets Alan's book published as "The Straight Truth" and leaks the identity of the anonymous author to Tommy. Another seven years later, Alan, who is now living with Peter, discovers Tommy has contracted AIDS. Alan rushes to Tommy's side and the two take to the road in "The Trip."

Springboarding from an urban legend about a gay couple turned away by an airline because one of them was ill, writer/director Miles Swain has crafted an extremely likable gay love story set against the tumultuous times of the gay civil rights movement. "The Trip" is often amateurish, featuring some painfully bad scenes, but the terrific performance by Braun as the relationship-seeking activist and the smartly assembled historical bridging montages go a long way towards garnering good will for Swain's feature debut. When Alan initially meets Tommy, he's trying to extricate himself from a gathering he did not expect to be gay. He invites Tommy to dinner as an interview subject, but Tommy clearly believes this is a ploy. Tommy's thrown off kilter when he arrives and is greeted by Alan's hippy-trippy girlfriend Beverly (Sirena Irwin). Beverly's not as dumb as she looks (and acts...and sounds) and sees the connection between the two men that her boyfriend refuses. Tommy is forced to reject Alan's friendship, not willing to stoop to a 'drunken encounter,' before Alan will face up to the facts. (Swain begins a a pattern of good musical choices by setting their first sexual encounter to Charlie Rich's "Behind Closed Doors.") After providing a historical flashforward from 1973 to 1977, couple Alan (looking even more Greg-Bradyish) and Tommy (in a wig so bad it makes one yearn for the bad one from 1973) run into Beverly, who has morphed into a Fondaesque aerobics instructor. This midsection, which establishes the couple in a mature relationship before blowing it into smithereens, is the least interesting, except for some great archival footage showing Bryant getting a pie in the face. The transition into the 1980s is as cheesy as the decade itself, and I mean that in a good way. As Missing Persons' "Destination Unknown" plays, we're led up to a headline screaming 'Gay cancer!' Beverly, now wearing a power suit and reading Sophisticate magazine, calls Alan to let him know that Tommy, who he hasn't spoken to in seven years, is sick. As Peter cleans house in preparation for a visit from his respectable, elderly parents (to Alan - 'I bought you a new suit. It's hanging in the closet.'), Tommy's old roommate Michael (Alexis Arquette, "The Wedding Singer's" Boy George wannabe, as the film's flaming quipster), Alan's mom (Jill St. John) and Beverly (now transformed into a "Like a Virgin" era Madonna wannabe) conspire to reunite Alan and Tommy. In the film's most embarrassing, misguided scene, the threesome upset Peter's staid parental dinner by dancing about his foyer - mom even steals his silverware on the way out! This is followed by an only slightly less embarrassing scene of Alan in a plane seated next to the bromeliad Tommy gave him on their first date (although "Horse With No Name" is nice accompaniment). Things look up for the "Thelma and Louise" like ending, where Alan finally becomes a man (and a stripper in a very amusing interlude). A 'two years later' coda is over-the-top 'message' kitsch that should have been cut. For a film with so many problems, it is awfully hard to dislike. Writing is wildly uneven, sometimes clever ('Alan tells me you're a homosexual' says Bev. 'There was nothing on TV' replies Tommy) and often amusing, even with frequent use of sexual innuendo ('I just love Dick' Tommy tells Alan's father, who thinks Nixon is a little too liberal). The tone varies wildly, however. Is Swain playing for camp with his cornball bromeliad metaphors? The film often seems like a 1970s indie or made-for-TV movie, which works in its favor (whether by design or not). In addition to some interesting soundtrack choices, Steven Chesne also provides a strong score. Braun gives a star-making turn as the smart and funny gay man who knows what he wants. Sullivan, however, projects the same geeky earnestness Hal Sparks brings to Michael on "Queer As Folk" with lesser results. Alexis Arquette is amusing as kind of a one-man Greek chorus, but Swain gives him too much free reign. Irwin is allowed to ramble all over the map, a different person every time we see her. People change, but this girl was too much of a ditz to have obtained the gravity she shows in a later scene. Jill St. John plays a quirky, supportive mom, but the veteran entertainer goes with the worst kind of flow in Swain's awful 'rescue/intervention' scene. Audiences should put themselves in an indulgent frame of mind before going along for this ride, but there is a real and true sweetness at the core of "The Trip."

In 1973, Alan Oakley (Larry Sullivan) was a straight-as-an-arrow 24-year old dyed-in-the-wool Republican who strived to make his military father proud. That is, until he meets Tommy Ballinger (Steve Braun), a 19-year old transplant from Texas who came to San Francisco to form the gay civil rights group, Out Loud. A chance meeting brings these two opposites together and everyone, except Alan, can see that they are made for each other. He sticks to the straight and narrow, so to speak, until he finally finds his heart in "The Trip." Freshman writer/director Miles Swain tries to make a period piece steeped in the 70's and 80's that attempts to do too many things. The film provides strong social commentary of the acceptance of gay lifestyles and the battles that people like Tommy and others fought to secure those rights. It is also a love story with the unsure, stumbling Alan trying to be something he is not because of the pressures his father has placed him under since he was a boy. Alan can't accept the spark of attraction that ignited between he and Tommy but the romance builds, anyway, and their lives are irrevocably altered as the gay community races unknowingly towards the coming AIDS epidemic. Swain also throws in what I sincerely hope is homage to, and not rip-off of, "Midnight Cowboy," depicted during the trip in "The Trip." This is far too light weight a production to try to pull of such heady fare as the history of gay life in America, circa 1973 to 1984, an allegory about AIDS and a soap opera romance, too. As such, the attention of the film and story shift from one plot line to another, sometimes with no sense of flow, especially as it moves past the romance and into the social analysis of the time. The overly ambitious story shows the first-time inexperience of Swain in both the writing and direction. There are some good elements to "The Trip," chief of which is the likable, charismatic newcomer Steve Braun as Tommy. He has a level of assurance in front of the camera that comes naturally (kind of like Val Kilmer in "Real Genius," with whom the actor has a passing resemblance), especially in his often humorous and sometime caustic remarks. He makes you laugh and understand, at once, when Alan asks him to hide from his parents by getting into the bedroom closet. Tommy says, "You'll bury me in the crawl space before I get in the closet!" The humor of the scene has an edge of defiance, too. Braun imbues in Tommy the qualities of individuality, honesty and willingness to stand up for what's right in the face of adversity, making him a fully developed character. Unfortunately, top billed Larry Sullivan, as Alan, does not have near the presence or chemistry of Braun so the relationship of the story and the acting between the principals is very lopsided. Alexis Arquette, as the swishy friend Michael, I found, initially, annoying, but the actor develops the character throughout the film until you realize you really like Michael. Ray Baker plays ill-defined "bad guy" responsible for Alan and Tommy's break up. Jill St. John has a small role as Alan's mother - there is life after Henry Kissinger, I guess - and MTV veteran Julie Brown plays a loud receptionist. You can see that there isn't a lot of "thesping," except for Braun and Arquette, going on here. Production values are low rent, too much so for the ambitious, over-laden script. There are a couple of good aspects to "The Trip," particularly Steve Braun's performance, that will appeal to its niche audience.