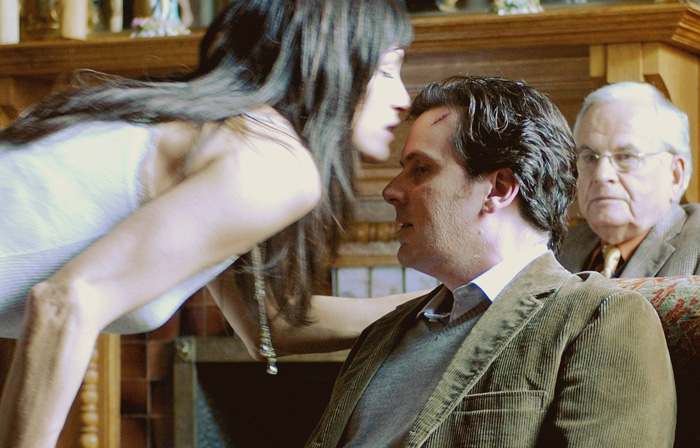 Jake Singer (Chris Eigman) is none to happy after breaking up with his longtime girlfriend. That is, until he meets Allegra (Famke Janssen), a beautifully young widow with an adopted son who attends the private school where Jake teaches. He falls for pretty Allegra but has to contend with the advice – real or imagined – of his Argentinean shrink, Dr. Morales (Ian Holm), in “The Treatment.”

Jake Singer (Chris Eigeman, Whit Stillman's "Metropolitan," "The Last Days of Disco" and "Barcelona"), a teacher at a private school approaching middle age, is finding himself increasingly isolated. His long time girlfriend is marrying another, his widowed father is practically estranged and he is on precarious ground with Leighton Proctor (Roger Rees, "The Prestige"), his school's dean. When a widowed socialite on the school board expresses interest in him, Jake must analyze why he takes flight with Dr. Ernesto Morales (Ian Holm, recently seen as another therapist in "Garden State"), his sadistic shrink, during "The Treatment." In adapting Daniel Menaker's novel for the screen, documentarian Oren Rudavsky ("Hiding and Seeking") has made a slight if enjoyable film whose Freudian theme feels tacked onto his film rather than grounding it. It's as if the adaptation were still the treatment. Eigeman gives such an engaging performance, however, that he reminds us how much we didn't know we've missed him. Holm is amusing as the Freudian psychiatrist who may or may not be real, popping up in Jake's real life like "Play It Again Sam's" Bogie, but his advise is at odds with Jake's flowering romance. Famke Janssen ("X-Men: The Last Stand") is at turns softly seductive and candidly aggressive as the now single mother of two Allegra Marshall and if Singer's discourse on literary classics alone cannot quite account for her attraction, their pairing is on solider ground than the Freudian conceit which could have easily been excised from the film. "The Treatment," retitled, could have been fleshed out by expanding the couple's path to parental consent, Allegra's amusingly short with her knowing mother Claire (Elizabeth Hubbard, TV's "As the World Turns"), Jake's a bit trickier but more rewarding reconnecting with dad (Harris Yulin, "Fur: An Imaginary Portrait of Diane Arbus," very good here). "The Treatment" was 2006 Tribeca winner of Best Film made in New York, an alarming indication of the quality of that festival's films. But while it doesn't warrant festival prizes, "The Treatment," although flawed, has its charms and is deserving of a spot on your Netflix queue.