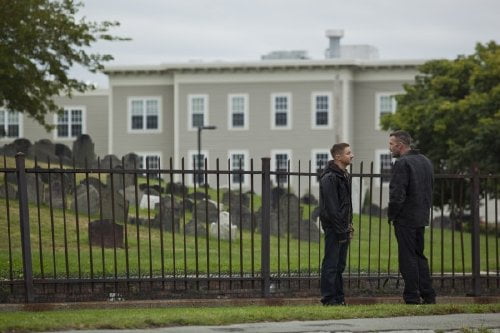 Charlestown-born bank robber Doug MacRay (Ben Affleck) made the decision, after failing as a pro hockey player, to follow in his father’s footsteps and eschews the straight and narrow life. When his partner, Jem (Jeremy Renner), breaks bank heist etiquette and takes a hostage, Claire Keesey (Rebecca Hall), Doug falls for the pretty bank manager and decides to make a break from his life of crime. But, if you are from The Town, you do not leave “The Town.”

When the Cambridge Merchants Bank is robbed, FBI Agent Adam Frawley ("Mad Men's Jon Hamm) turns his eyes to Charlestown, that one square mile area of Boston that houses more bank and armored car robbers than anywhere else in the country. But these criminals are harder than usual to find based on an Irish version of Omertà that the locals practice in the neighborhood they simply call "The Town." Cowriter (with Peter Craig and his "Gone Baby Gone" partner Aaron Stockard) Ben Affleck surprised everyone when he first took seat in the director's chair with a gritty Boston crime thriller and his second outing is the opposite of a sophomore slump - he's knocked one out of the park. In fact, Affleck should become Boston's resident director because nobody does it better. "The Town" oozes authenticity from its terrific (and geographically correct!) use of locations (the Charlestown Boys and Girls Club, the Zakim Bridge, Fenway Park, Boston Sand and Gravel) to the cast's near perfect mastery of the notoriously difficult Boston accent. Affleck cuts right to the chase with four men in Skeletor masks robbing a bank. Computer hard disks are fried, bleach is splashed around and one guy is unnecessarily violent, beating a bank employee's head with a gun butt. But the man who handles bank manager Claire Keesey (Rebecca Hall, "Vicky Cristina Barcelona") notes her nerves as she tries to open the vault and softly calms her down. He's Doug MacRay (Ben Affleck), a guy who almost made it out of the town with a pro hockey career. Ironically the town bred in Doug pulled him back and he fell back into the family business. He's got a mother who abandoned him as a child and a father (Chris Cooper, "Seabiscuit," "Remember Me") in jail and is closest to James 'Jem' Coughlin (Jeremy Renner, "The Hurt Locker"), the 'brother' whose family took him in when his dad got sent up. Unfortunately Jem's the guy with that hair trigger and when he ended up taking Claire hostage on that Cambridge job, he kept her license when they released her and is now concerned to learn she lives in their neighborhood. Doug promises to check her out and is satisfied she doesn't recognize him. But he can't stop seeing her, perhaps seeing her as his salvation and ticket out of Charlestown. There's a problem, though. Doug's beholden to Fergus 'Fergie' Colm (Pete Postlethwaite, "Inception") who promises him Claire will come to harm if Doug doesn't organize one last job. And after that armored car robbery in the North End where a guard was shot, they're 'hot' with the F.B.I. With Affleck's adaptation, though, it's not the story so much, but the telling. There's the run down on an armored car, driven by a 'former Medford cop' who 'cracks open the Herald.' There's the Fighting Irish tattoo that Claire spies on Jem's neck that hangs over the robbers like an unseen anvil, the 02129 zip code tattoo on a tough Townie's forearm. Doug's missing mother hangs over his future and the truth of her past explodes in the present. A chase scene through the cramped maze of the North End is all short stop and start exhilaration, ending with an exclamation of Omertà of the highest order. Frawley delights upon bursting into a suspect's home, finding guns and 'Oxy' - 'a Townie's Christmas!' A sense of melancholia weaves throughout the film with the gentle hint of an old Irish folk song or the 9/11 feel surrounding Claire's lost brother, sadness in sunny days. The cast is excellent across the board. Affleck makes Doug a decent guy with an unlucky inheritance, charming enough to attract a 'Toonie' and Renner's intimidating without losing empathy. In one scene, Cooper delivers an entire way of life and Postlethwaite commands as the man who manipulates, stripping thorns from roses at Town Flowers as he lays out threats. Hall is a solid outsider, a nice person who doesn't understand just how much of a hothouse flower she is in her urban environment. The biggest surprise is Lively, convincing as a bleary, drug running single mom who thinks Doug's in her future because of their past. Jon Hamm makes his biggest step away from Don Draper in a dramatic role that he nonetheless infuses with humor. Boston rapper Slaine ("Gone Baby Gone") is a hometown natural as Doug gang member Gloansy and gets the biggest laugh of the film. The film looks great. cinematographer Robert Elswit's ("There Will Be Blood," "Salt") crisp and bright images, occasionally softened by rays of light, are a joy to behold and his use of establishing shots establish more than a location, they note its dividing lines. A well crafted and subtle score moves from wistful Irish heritage to driving action. Makeup is a little less subtle, from Blake Lively's slutty smear to a preponderance of stubble on both sides of the law. "The Town" may not have the deep soul of "Eddie Coyle" nor the Shakespearean reach of "Mystic River," but Boston and its inhabitants have never been captured more acutely. Affleck shouldn't be concerned about being pigeonholed as a Boston filmmaker - he should embrace it.