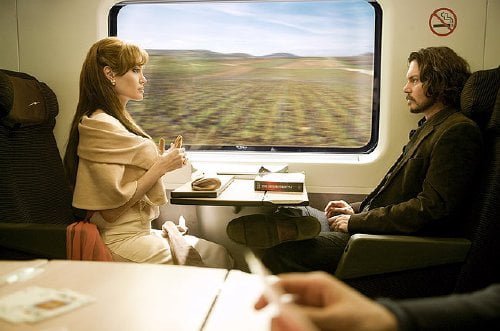 Frank Tupelo (Johnny Depp) heads to beautiful Italy to help mend his broken heart after losing his wife. While on the train from Paris to Venice, he is approached by the mysterious, and gorgeous, Elise Clifton-Ward (Angelina Jolie) and sparks fly This “chance” meeting, though, is going to turn Frank’s life around as he is plunged into a world of danger and intrigue as “The Tourist.”

When Elise Clifton-Ward (Angelina Jolie) is contacted by the lover she has not seen for two years, he assures her he loves her, but advises her to leave Paris on an 8:22 train and pick a man of his height and build to convince the British police that have her under surveillance and the Russian mobsters he stole billions from that the stranger is him. So Elise mesmerizes American math teacher Frank Tupelo (Johnny Depp), then discovers he's much more than just "The Tourist." Angelina Jolie and Johnny Depp are both huge movie stars, but they always seemed an odd match to me. "The Tourist" is all about star power and scenery and is a movie than Florian Henckel von Donnersmarck, who made the brilliant Foreign Language Oscar winning "The Lives of Others," fails to direct. The story (adapted from the French film "Anthony Zimmer" by von Donnersmark, Christopher "The Usual Suspects" McQuarrie and Julian "Gosford Park" Fellowes) is limp and preposterous at the same time. The action is lethargic. Jolie's performance is smug - she's a walking Vogue ad, aware of all eyes upon her. Only Depp maintains any rooting interest as the Hitchcockian Everyman drawn into extreme circumstances. Pity, too, poor Paul Bettany, the promising actor from "A Beautiful Mind" who can't seem to catch a break lately. He's the laughably inept cop on Elise's, and ultimately her lover Alexander Pearce's, tail. Even his boss (former 007 Timothy Dalton, at least appearing to be having a bit of fun) dismisses him. The cops are always one step behind or being played. Things perk up a bit when the gangsters get involved, but the most action we get is Frank running over Venetian rooftops in his pajamas and a canal 'chase' scene where one motorboat *drags* another. The 'twists' are both implausible and completely predictable. Even the production has problems. Closeups during Frank's initial escape sequence are lit so differently than the long shots they appear set bound. Someone forgot to powder Jolie's nose. James Newton Howard's score has faint echoes of Hitchcock, but is otherwise innocuous. "The Tourist" scores a few chuckles from Depp, who, along with Venice, keeps the film watchable, but it makes a good argument for staying home.