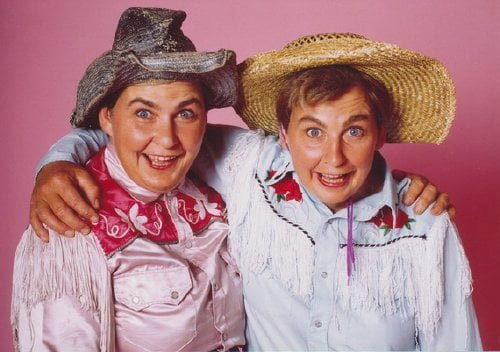 Jools and Lynda were twins who grew up on a farm in Huntly, New Zealand. They discovered a talent for singing and songwriting and began busking on Friday nights around 1980. They were also both lesbians and political activists who went on to a college tour before becoming New Zealand's most beloved comedy variety act which they still are to this day as "The Topp Twins: Untouchable Girls."

Take the Indigo Girls and spice them up with some k.d. lang, Dame Edna, Minnie Pearl, the AbFabers, Monty Python and Rodney Dangerfield then apply kiwi accents and you might begin to get an idea of what the Topp Twins are like. Jools and Lynda are all the more amazing for having been embraced by all walks of life from well before gay and lesbian rights became an issue and for putting themselves into the thick of protesting against Apartheid, nuclear power and for Land Rights. In an onscreen interview, N.Z. PM Helen Clark states her belief that the twins' wholesome image put an everyday face onto the Gay and Lesbian Rights Act that more than helped it pass. Director Leanne Pooley has a trove of material, from stills to old busking video to access to many of the activists and musicians and musician activists the Topps have collaborated with. She also speaks with their incredibly supportive parents, who view their family, which includes an older, gay son, with a sense of both humor and pride ('they've never embarrassed us' says dad). But it is the three decades of concert and television performances where the girls really shine with their combination of protest songs and old-fashioned yet naughty character based schtick. Pooley and her editor Tim Woodhouse ("The Promise") glide in and out of performances to interviews and Topps' anecdotes as well as seemlessly transitioning between the Topps and some of their many character combos within the same setting. The Topps often appear in public as many of their alter egos - the two Kens have participated in soccer matches, judged agricultural shows and gone to strip clubs with a bunch of farmers while Dillie and Prudence have raised funds for charity by giving tours of their hostess's closet on the sly. Not only are they beloved by their public, but by other performers, as we see frequent guests join them on stage. Billy Bragg talks about how smart they are getting their political agenda across by combining it with entertainment. When they perform with Maori land rights activist Mereana Pitman, they relate a risky act of civil sabotage and have their audience in appreciative stitches. We follow them on their brilliant Gypsy Caravan tour. Powered by a tractor at the speed of 15 mph, they entertained sellout crowds in rural communities, selling tickets from the back of their caravan, finding jars of pickles and relishes left on their hotel room doorsteps. When Jools faces breast cancer, Lynda is there with her every step of the way. Jools believes her horses help heal her and discusses how training horses is akin to working an audience - you have to 'gentle them,' 'lead them.' She almost sounds like Buck Brannaman. Pooley ends with Lynda and the healthy-again Jools on stage and when the curtain comes down, she's left her audience wanting more. And yet, at an economical eighty-four minutes, it is incredible how rich a journey she's taken us on. The Topp Twins are a stellar examples of lives well lived. They have fun, make a difference and make people laugh.