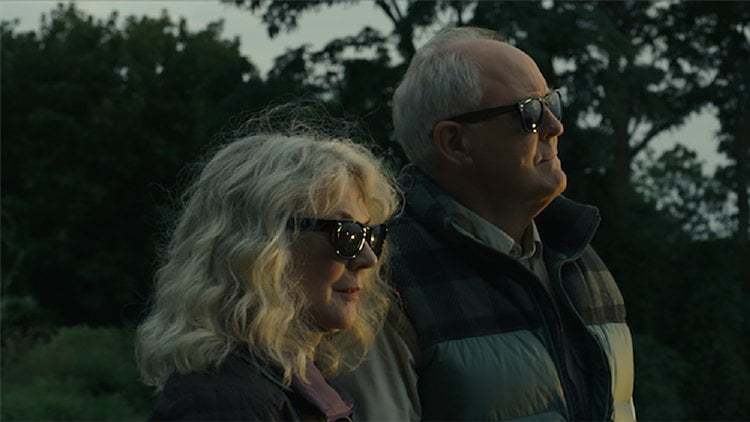 Ed Hemsler (John Lithgow) has spent his life preparing for the disaster, natural or manmade, that may never happen. Ronnie Meisner, who lost her daughter at just 13 years old, has become a shopaholic and consummate hoarder. These very different people find common ground, and maybe romance, in “The Tomorrow Man.”

Music video director Noble Jones makes his feature film debut scoring wonderful characterizations from his leads working with a slight script. Ed Hemsler (John Lithgow) is a lonely old man whose apocalyptic pessimism and conspiracy theories have distanced him from his son Brian (Derek Cecil). He’s set in his routine, which includes watching a female news broadcaster while he eats his dinner, and shopping at Dan’s Market, where he stocks up on cans of tuna and batteries. When he spies a beautiful older woman buying items he approves of, he finagles a meeting by parking his Ford pickup too close to her driver’s side door, forcing an ‘impromptu’ rescue. Ronnie’s (Blythe Danner) taken aback by this forward older man, yet agrees to dinner. Ed can’t stop chatting about all manner of things while Ronnie’s more reticent. When he takes her home, hoping to be invited in, she instead asks if they can go to his place. She has a secret much like his in everything but its psychology, and it is this that gives the film its title without adding much to its drama. “The Tomorrow Man” works best as a showcase for its senior love story, Danner in particular concocting an adorably odd character (she sings ‘Muskrat Love’ and likes to watch war documentaries). A Thanksgiving visit to Ed’s son’s provides Katie Aselton and “Prospect’s” Sophie Thatcher a chance to shine as his wife and daughter, but their characters are underwritten. Also notable is Eve Harlow as Ronnie’s protective gift shop coworker Tina. Grade: