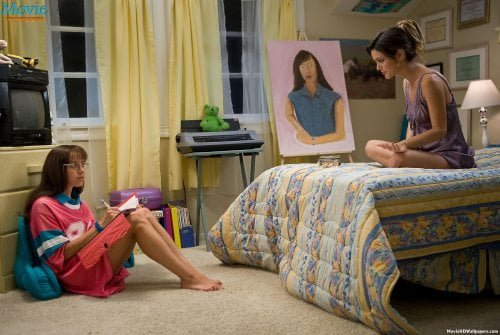 As she's written in her own valedictorian intro, Brandy Klark (Aubrey Plaza, TV's 'Parks and Recreation') has the highest GPA in the history of Boise's Merryweather High School. But there's one thing she hasn't done to prepare for college - lose her virginity. With advice from sister Amber (Rachel Bilson, TV's 'Hart of Dixie') and besties Wendy (Sarah Steele, "Spanglish") and Fiona (Alia Shawkat, TV's 'Arrested Development') and the ultimate goal of shagging swimming pool hunk Rusty Waters (Scott Porter, TV's 'Friday Night Lights'), Brandy charts a path to go all the way with "The To-Do List."

The teen sex comedy has traditionally been from the male point of view, so writer/director Maggie Carey ("Ladyporn," TV's 'Funny or Die') has come up with something of a composite - a woman who takes an aggressive approach to experiencing various sexual activities as ends to themselves. The film is raunchy, but not vulgar, and until an unnecessarily preachy climactic moment, very funny. Brandy is established as a bit of a straight arrow know-it-all, commanding silence for her graduation speech before she's heckled off the stage with a 'virgin' catcall. She's planning on attending a Mormon after-party but Wendy and Fiona kidnap her, taking her to a kegger instead. Experiencing sweet schnapps and beer for the first time opens Brandy's eyes to the appeal of the guitar-playing college guy Rusty and she almost scores in a case of darkened room mistaken identity. When she arrives for her summer job at the local public pool, she's thrilled and embarrassed to discover Waters works there, and even more embarrassed by her own naivete falling for a series of 'newbie' pranks. Also on staff is Cameron (Johnny Simmons, "21 Jump Street"), her sweet study partner who's been silently pining, and stoner manager Willy (SNL's Bill Hader, the filmmaker's husband) who takes a somewhat paternal interest when he's not reminding Brandy that she has no boobs. Cameron doesn't realize he's part of an agenda when he has a date with Brandy but goes along with her command to finger her, awkwardly navigating a skort. She checks off other entries with his buddies Duffy (Christopher Mintz-Plasse, "Superbad") and Derrick (Donald Glover, TV's 'Community') and, when she goes to a club to hear Rusty sing, another with rock singer Van (SNL's Andy Samberg). But Brandy's checkmarks are causing problems. She's broken the 'ho's before bro's' rule with Wendy's crush, upset Willy who finds her in flagrante and stood up Cameron who finds her list when her parents invite him in. Then there's her dad, Judge Clark (Clark Gregg, "Much Ado About Nothing"), who's already freaking out over the news that he wasn't his liberal wife's (Connie Britton, TV's 'Friday Night Lights') first and who's in the wrong place at the wrong time when Brandy finally reaches her goal. Plaza shifts her deadpan sarcasm into gullible literalness and the results are fun, especially as she misinterprets sexual slang and thinks she's being 'Caddyshacked.' Carey's put together a great cast and does a fine job balancing Brandy's work life, home life and friends, all as relate to her project. The sexually experienced Bilson is a fun contrast to her 'mathlete' sister, just as Britton's warm sexual cheerleading comes up against Gregg's sexual squeamishness. The film's pool and fast food restaurant settings (Fiona and Wendy are Big Bun employees) recall "Fast Times at Ridgemont High" and one of the film's best set pieces is when Carey crosses the two groups, young pool kids each sent to find out what the other sex is talking about like a game of telephone. Porter is perfect as the object of Brandy's obsession, refreshingly not painted a bad guy just a lusty one, a foil for Simmons' boy-next-door romanticism. Shawkat, such a great presence it's a mystery why she hasn't gotten more big screen roles, is down-to-earth and worldly while Steele's more girly, both very real in the roles. Hader does a fine job alternately pranking on and protecting Brandy, but he's given an unlikely parting scene, part of Carey's overall problem wrapping her film. The film's 90's setting is well reflected in costume and a soundtrack which includes the Spin Doctors' 'Two Princes,' James' 'Laid' and MC Hammer's 'You Can't Touch This.'