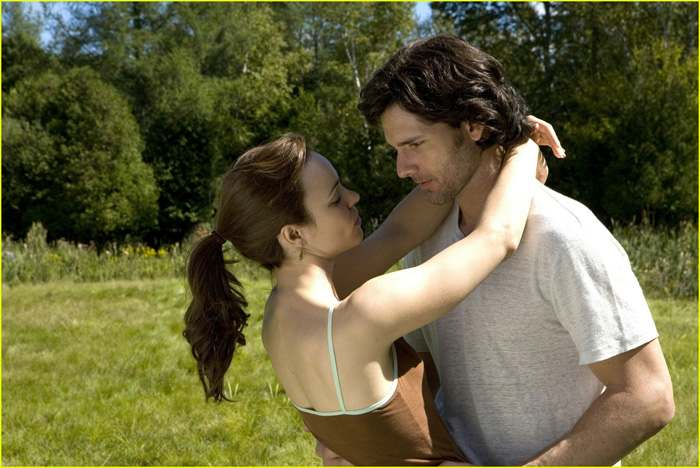 A terrible accident on a dark, icy road took the life of 6-year old Henry’s (Alex Ferris) mother, Annette (Michelle Nolden), and triggered a dormant gene in the boy, causing him to disappear from the fiery crash. He reappears on the roadside, naked, when a man comes up to him, from nowhere, to tell Henry that everything is all right, he is a time traveler. The man, it turns out, is older Henry (Eric Bana) who learned to cope with his gift and devote his love to “The Time Traveler’s Wife.”

At the age of six, Clare Abshire (the very self-possessed Brooklynn Proulx, "The Assassination of Jesse James by the Coward Robert Ford") hears a man's voice coming from a bush in the field where she plays behind her house. He asks for a blanket, tells her that he is Henry DeTamble (Eric Bana, "Troy," "Funny People"), and that he is from the future. She asks him to prove it and he cannot, until minutes later, he disappears. Clare grows up hiding this man's visits, dreaming of the day she will become "The Time Traveler's Wife." Audrey Niffenegger's best-selling novel played with the idea of the timelessness of love and it was a dense story with many characters and interconnected threads. As adapted by "Ghost" screenwriter Bruce Joel Rubin, it's been reduced to such an elemental core that, after a brief prologue, it begins at the book's midsection. I could never figure out why the book was titled "The Time Traveler's Wife" as things are mostly told from the perspective of the time traveler. There is even less of her perspective here, especially regarding the non-Henry pieces of her life. Still, as directed by Robert Schwentke ("Flightplan"), this luminous looking film (shot by Florian Ballhaus) succeeds because of Rachel McAdams' ("The Notebook," "State of Play") stubborn passion and Eric Bana's soulful predicament (after a string of misfires, it is good to see Eric Bana back in form in the summer of 2009). The fact that Schwentke and his actors have been able to make a serious romance about a man who disappears, his clothes slithering to the ground in his wake, without evoking titters (at least when they do not intend to) is a marvel to begin with. The concept of a genetic disorder causing uncontrollable time travel akin to epileptic seizures is a strange one at best, but Niffenegger used it well and if the film doesn't do it quite as much justice, it still addresses ideas of fore-knowledge of events, fate and free will. The film begins with Henry's first defining moment in life - the death of his opera singing mother (Michelle Nolden) in a Christmas Eve car crash when he was six and for which he has blamed himself ever since. Then we take a giant leap to the point where Clare finds Henry in her own time, a time before he travelled back to meet her. Their pre-ordained love story takes off, but in time, is stressed by Clare's inability to carry a child to term. When we see a young girl (Hailey McCann, "The Grand") smiling brightly from a street corner as Clare and Henry walk down a Chicago street arguing, it is not too difficult to realize who she must be. Fans of the book should be essentially pleased. Chicago locations and interior production design certainly evoke the feel of the novel's spaces. A close adaptation would have resulted in a film of at least three hours run time, and yet it is hard not to miss so many characters who rounded out the story (Henry's Korean landlady, his suicidal pre-Clare girlfriend and her post-Henry lesbian lover, the home grown chemist suffering from AIDs). There are shattering events, too, that remain unrecognized, involving Clare's mother (Fiona Reid) and her roommate's boyfriend/future husband Gomez (Ron Livingston, "Office Space"). The climax has been softened, its earliest foreshadowing removed. The one change made that rankles most, though is the feel-good ending that replaces the more romantic, yet more meaningfully melancholy sendoff of the book. "The Time Traveler's Wife" is a superior romance when compared to the usual Hollywood suspect, but it is even better as an introduction to the novel which spawned it.

I have been a lifelong fan of time travel in books and movies from Isaac Asimov’s brilliant novel, The End of Eternity, to George Pal’s 1960 classic film, “The Time Machine.” In nearly all of them, there is always the dilemma presented to and by the time traveler – any changes to the past will have extraordinary affect on the future. In addition, it is a no-no to reveal you to a past self because of the potential changes triggered by such a meeting. “The Time Traveler’s Wife” nimbly gets around these issues quickly – you cannot change what happens in the past, it happens anyway – and gives us, instead, a love story that spans time and a drama, too. Henry cannot control his ability but does frequently visit some times and places repeatedly. One recurrent place is the woods near the home of 6-year old Clare Abshire (Brooklyn Proulx). Henry cannot travel clothed and every time he does, he arrives naked. Clare lends him a blanket and, the next time he visits, leaves a pile of her father’s old clothes for Henry to wear. This becomes a ritual for the two and a deep friendship develops as Clare grows up. When she becomes a young woman, their friendship turns to love and, soon, to marriage. This is a sweetly rendered adaptation by director Robert Schhwentke and scripter Bruce Joel Rubin of Audrey Niffenegger’s novel. Not having read the book, I approached the film with open eyes and enjoyed the thoughtful romance with its fantasy, not science fiction, premise. Acting is solid with Eric Bana giving an empathetic performance as the put upon time traveler – his genes propel him away at the most inconvenient of times. Rachel McAdams has terrific chemistry with her costar and imbues Clare with love and caring. Her passion to have Henry’s baby is palpable and she goes through some unusual (and clever) subterfuge to fulfill this obsession. The supporting cast ably fill there roles but they are mostly never much more than background characters. Techs are well done. The simple effect of Henry dissolving into another time makes its point and quells any disbelief. I accept Henry’s ability and the fact that, though he can travel extensively, he can change nothing. This deft piece of writing by the novelist makes this a fresh, nicely acted fantasy tale that will attract the ladies and the guys that go to movies with them. This is not a chick flick but one that will resonate with more mature audiences. You are not encumbered by flashy special effects that get in the way of the sweet (not saccharine) love story.