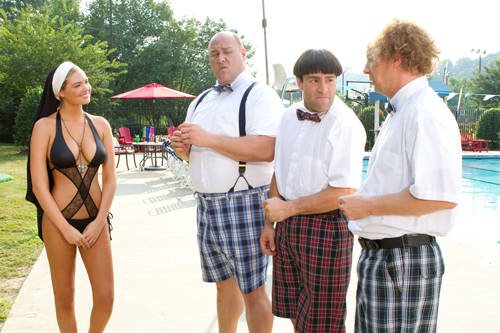 When the nun-run orphanage where they grew up and now work as maintenance men is in danger of closing, Moe (Chris Diamantopoulos, TV's 'The Kennedys'), Larry (Sean Hayes, TV's 'Will and Grace') and Curly (Will Sasso, 'MADTv') venture out into the world for the first time to try and raise over $800K in thirty days. They meet a woman named Lydia (Sofía Vergara, TV's 'Modern Family') who'll answer their prayers if only they these ease her poor, suffering husband out of his misery, but she doesn't realize she's hired "The Three Stooges."

Finally, after years of casting news that has seen the likes of Sean Penn, Benicio del Toro and Jim Carrey become attached and then depart, "The Three Stooges" hits the big screen with bigger names in its supporting cast than its leads. Once the trailer came out, most reacted with dread. And yet, while they've made any number of poor decisions here, co-writer (with Mike Cerrone)/directors Peter and Bobby Farrelly have replicated the Stooges schtick in a current environment with great respect for timing, sound effects and each Stooge's distinct role in the whole. The biggest surprise is Sean Hayes, who, while looking nothing like Larry Fine, has captured my favorite Stooge's essence, particularly his vocal inflections. The movie is broken into three parts, each introduced with that 'Three Blind Mice' theme like a Stooge's short. Each offers an homage to one of the original shorts, yet carries the Farrellys' storyline through. In the first, the three are introduced as babies ('Angels from heaven!' declares one naive sister), tossed onto the doorstep of The Sisters of Mercy Orphanage. Sister Mary-Mengele (Larry David, HBO's 'Curb Your Enthusiasm,' absolutely brilliant and not simply playing drag) is the one who opens the wriggling bag and is greeted with an eye poke (accompanied by those plucked violin strings) that catapults her over the railing, the first of many injustices she will be the recipient of at the hands of these 'morons.' And yet, there's a sweetness to this first chapter. Despite their slapstick physical assaults (choreographed expertly among Diamantopoulos, Hayes and Sasso), the lads were always good hearted and looked out for one another as well as small children. In a bid for adoption engineered by Sister Rosemary (Jennifer Hudson, "Sex and the City 2") to only include the trio but which is 'crashed' by young Teddy (Jake Peck), Moe (Skyler Gisondo, 2007's "Halloween") gets the nod (after an 'American Idol' style fakeout from adoptive dad Mr. Harter (Stephen Collins, TV's '7th Heaven')), but when asked what he wants for his 'birthday,' wishes for his two friends. Young Teddy takes his place. Cut to the lads all grown up and playing hammering and sawing recordings while they sleep in the tool house. Monsignor Ratliffe (Brian Doyle-Murray) arrives bearing the news that the orphanage must close and the lads set off to save it. The second and third installments don't hold up because the Farrellys don't always adhere to Stooges' classicism when 'modernizing' them. Our spirits lift when the Moe, Larry and Curly masquerade as a doctor and two nurses, but, with the exception of a bit where they rastle with Lydia's lover Mac (Craig Bierko, "Cinderella Man," "The Change-Up") in full body cast ('He's turtling!') and Curly's flirtation with an Indian intern, the segment goes south with an overextended bit where the boys use peeing babies (all male I presume?) as weapons. Later, fart jokes are introduced, albeit with restraint for the Farrellys, but there is simply no place for pee and fart jokes in the Stooges' lexicon. A salmon farming skit works because it would have worked back in the 30's despite the concept being modern. The last segment places the lads at a high society party, a classic setup, but also sees Moe added to the cast of Jersey Shore. While it's fairly clear that the Farrellys are attempting to make a statement contrasting the morons we watch now against the ones we loved in childhood, all that comes across is how self conscious Snooki, The Situation, JWoww, Sammi and Ronnie look. Moe does get a great line at Snooki's expense, commenting that 'Just because she's wearing a genius hat doesn't mean she is one.' (Snooki's got a Guinness cap on.) That says it all, but the fact is the Shoreites were a pie in this face. Meanwhile Larry and Curly discover a grave situation involving an old friend and, in true Stooges fashion, attempt to save the day. The film also stars 'Glee's' Jane Lynch as Mother Superior, Marianne Leone (HBO's 'The Sopranos) as Sister Ricarda and Farrelly veteran Lin Shaye as Nurse Crotchet. Hair, makeup and costume (classic Stooges looks updated) all look great. Atlanta locations look second rate, but visuals have never been the Farrellys' strong suit. An epilogue featuring 'Peter and Bobby Farrelly' (Antonio Sabato Jr. and Justin Lopez) warning about the dangers of eye pokes and the safety props used for sledgehammers to the heads is all too PC for a Stooges movie, especially when kids can watch the real deal any old time.