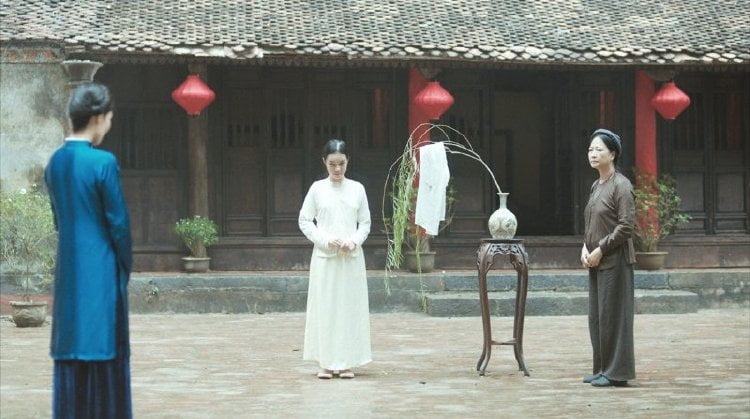 19th century Vietnam. 14 year-old May (Ngyen Phuong Tra My) is ready for her marriage to a wealthy landowner. But, life in her new household is far more complicated than she expected as “The Third Wife.”

In northern Vietnam of the late 1800's, fourteen-year-old May (Nguyen Phuong Tra My) enjoys her wedding day banquet as she becomes "The Third Wife" of wealthy landowner Hung (Le Vu Long). That night, she performs her connubial duty and is inspected along with the bloodied sheet the next morning by Ha (Tran Nu Yen Khe), Hung's first wife. But while she is at first seduced by the sisterhood of the household, becoming smitten with sensual second wife Xuan (Mai Thu Huong Maya), May soon learns that producing a son is the only reason for her existance as "The Third Wife." Vietnamese writer/director Ash Mayfair makes her feature debut inspired by the life of her own great-grandmother, its visuals (by "Pop Aye" cinematographer Chananun Chotrungroj) informed by the beauty of the natural world. This meditative film lulls us initially as we, like May, become familiarized with the household, its animals, its chores, and its rituals. May first signals female oppression as three generations gather over a meal. A request is made by one of the woman for monies to be set aside for new dresses for the girls, but the family paterfamilias is only concerned with purchasing a horse for Hung's son Son (Nguyen Thanh Tam). Xuan's young Nhan (Mai Cat Vi) voices her desire for a horse as well but is quickly silenced by her mother. Then Auntie Lao (Nguyen Nhu Quynh) tells May that Xuan is not a true mistress of the house as she has not born a son. But Xuan is a bold free spirit, teaching May how to enjoy sex by first learning how to pleasure herself. May watches in fascination as Xuan sneaks out at night to tryst with her husband's son. She enjoys the benefits of her own pregnancy, but observes Ha's despair when the older woman miscarries. Tragedy looms when Hung insists it is time for Son to marry, the young man unable to rationalize his opposition. He rejects his young wife Tuyet, who is further humiliated when her own father condemns her for not being able to 'perform her duty.' An innocent life is rendered meaningless by the whims of men. Mayfair's wrap is astonishing, a yellow flower's meaning established at her onset a shocking threat, Nhan acting out her rebellion. Grade:

When I saw the trailer for first time writer-director-producer Ash Mayfair’s “The Third Wife,” the thought popped right into my head – “Raise the Red Lantern (1991)”. That comparative thought is justified – there are lots red lanterns and wives jockeying for favor – but that does not diminish the talent of the newcomer filmmaker. The story about the titular wife who travels far to marry the master of the house is a quiet study of the dynamics of that marriage and all of its players. Young May is number three wife in the household, with #1 Huan (Long Le Vu) and #2 Xuan (Mai Thu Huong Maya), her rivals for the master’s attention. She vows to give him a son and cement her position in the family, no matter the cost. This vow will haunt her later, in several ways. The quality of production on all levels is remarkable for a newcomer and director Ash Mayfair makes a striking feature debut. And, shows she knows how to make a movie.