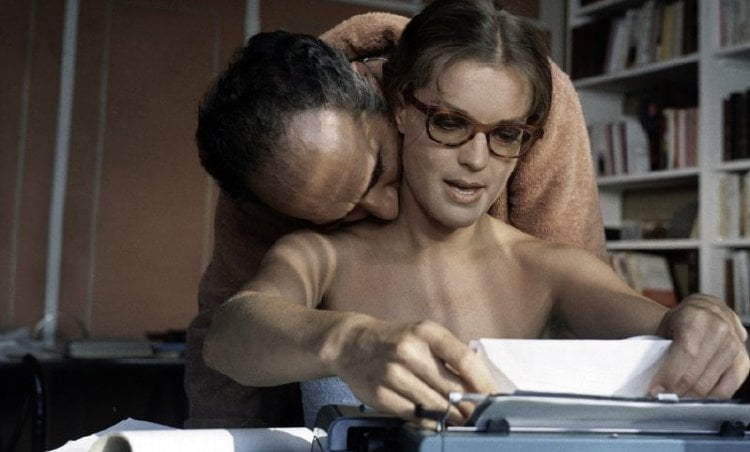 Passersby begin to rubberneck at a rural French intersection, a truck driver and another motoristgiving accounts of just how the speeding Alfa Romeo ended up flipping over and hitting a tree, its driver thrown from the vehicle.  The action goes into reverse, giving us a backwards driver’s eye view of his fateful trip, back to the morning Pierre Bérard (Michel Piccoli) helped his young loverHélène (Romy Schneider) find the right word for a translation (‘to embellish’).  Now Pierre lies near death as he contemplates “The Things of Life (Les Choses de la Vie).”

Years before Jean-Luc Godard’s classic car pile-up in “Weekend,” director Claude Sautet (“Classe Tous Risques”) analyzes an accident from multiple angles and close quarters in sequences still shockingly effective fifty years later.  Adapted from the Paul Guimard novel 'Intersection’ by Jean-Loup Dabadie, “Les Choses de la Vie” is a case of a life passing before its owner’s eyes with a hint of the 1955 Alfred Hitchcock Presents episode 'Breakdown’ in which a paralyzed man in a morgue wonders if anyone will notice he is alive.  Always invested in matters of the heart, Sautet’s protagonist frets over an undelivered letter to Hélène on his person, one written rashly, now regretted.

Pierre, an engineer, had just argued with Hélène about a business trip to Tunis they were to take together, one which he called off to instead go boating with his son Bertrand (Gérard Lartigau) at the vacation home on Île de Ré he once shared with his estranged wife, Catherine (Lea Massari).  Hélène is distraught at the thought of Pierre spending time with his family, not knowing that, having passed a joyful wedding, he has changed his mind, realizing he should marry her (that letter he carries is a break-up letter).

Sautet jumps around in time, using harrowing slo motion sequences from Pierre’s accident to bridge past and present where strangers, police, ambulance and hospital attendants note Pierre’s current condition falling in and out of consciousness.  Words and images evoke past memories – the dog he once adored running past Catherine (‘You love them and then they die’), happy times sailing with his wife and son, riding a bike with Hélène.  Present point of view shots include extreme close-ups of shoes in the grass and unfocussed hospital workers.  We see Hélène receive the phone message Pierre left earlier, asking her to join him at his Renne hotel room ‘urgently.’  Joyous, she rushes towards a different scene than the one she’s contemplated.  Catherine makes a compassionate decision.  Pierre imagines he is in Ré’s waters, his family’s boat passing him by…

The late Michel Piccoli, who died earlier this month at the age of 94, gives an even keeled performance, a visit with his character’s adult son causing him to briefly change course before righting his ship.  He makes us invest in this Everyman and his relatively ordinary life, aided by Sautet’s direction and story construction.  Schneider and Massari are supporting players to Pierre’s story, with Schneider traversing happiness to heartbreak and back again and Massari the pain of an irredeemable past.  Gabrielle Doulcet is notable in a small role.

Pierre (Michel Piccoli) is a successful highway engineer who, ironically, has a terrible accident while driving the roads far too fast. As the seconds of horror unfold, he thinks back to his life with his mistress, Helene (Romy Schneider), and all the things he did wrong in “Les Choses de la vie.”

If there is one thing that I will remember about “Les Choses…” is the incredible staging of the film’s opening, the crash, in slow motion and brought back during the course of the film, in small parts. This is used as punctuation as director Claude Sautet tells Pierre’s story and how he got into such a state.

Pierre is in a dilemma. He loves his mistress, Helene, but is still tied to his wife, Catherine (Lea Massari), and his family with her. It is a story of a man wanting it both ways – have a “normal” married life AND continue on as always with Catherine. The conflict will tear Pierre apart, bringing us to the accident, which bookends the film.

This is the third Romy Schneider film we have seen from the Film Movement retrospective and each involves, to varying degrees, romantic triangles. It must be because young Schneider is such a babe and would be the object of affection for more than one man.