The Thing About My Folks 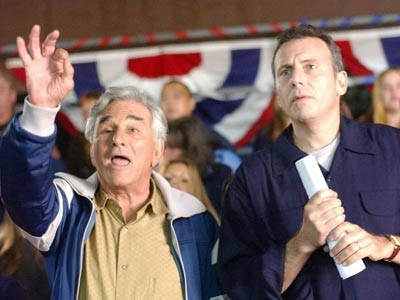 For New Yorkers Ben and Rachel Kleinman (Paul Reiser and Elizabeth Perkins) it’s just another typical evening as they put their kids to bed. That is, until there’s a knock at the door and Ben’s father, Sam (Peter Falk), breezes in as if nothing’s wrong. But, there is. Dad shows them an ambiguous letter from his wife telling him she has gone away to be alone. Ben, to distract his father, takes Sam on a road trip to upstate New York in “The Thing About My Folks.”

When Sam Kleinman (Peter Falk, TV's "Columbo") shows up out of the blue at his son Ben (Writer/star Paul Reiser, TV's "Mad About You") and his wife Rachel's (Elizabeth Perkins, "Must Love Dogs") New York City apartment, the young couple know something's up, but it takes a while to get Sam to tell them that his wife, Muriel (Olympia Dukakis, "The Event"), has left him. Ben begins a family phone pow-wow with his three older sisters, Linda (Ann Dowd, "The Manchurian Candidate," "The Forgotten"), Hillary (Claire Beckman, "The Door in the Floor") and Bonnie (Mimi Lieber, "Bulworth"), who set to work sleuthing out mom's whereabouts, then takes dad along on an errand in upstate New York that turns into a father/son road trip and opportunity for Ben to delve into "The Thing About My Folks." Paul Reiser's dual reflection on his own dad and the actor Peter Falk should resonate with any baby boomer dealing with living parents of the WWII era. This warm, family comedy/drama gets to the quick of what makes these two generations so different, the stiff-upper-lips of the parents holding back emotionally about what shaped their own lives while their children therapeutically wallow in every little detail. "The Thing About My Folks" is the newly formed Picturehouse's first acquisition, and while it's cut from a similar cloth as chief Bob Berney's former Newmarket triumph, "My Big Fat Greek Wedding," Reiser's insights go far deeper and the laughs are more genuinely earned. With Reiser narrating, Sam is remembered by his son as a man obsessed with his daily, ritualistic applications of Johnson & Johnson's talcum powder, an olfactory memory (the strongest kind) that also works as a generational tie to Ben's own babies (and is quite a sight easier to accept than Gus "Greek Wedding" Portokalos' Windex fixation). Falk emerges from the cloud of powder into present day New York and immediately engages with his evasive verbalizations and body language. Each of his daughter-in-law's hospitable offers is met with a casually dismissive wave and drawn out 'Nah, nah, nah, nah, nah' until, finally he counters 'but coffee I'll take.' It's the start of a delightful performance of very recognizable behavior. Falk may figure in Oscar talk this year. The first chink in the sympathetic receipt of Sam's dilemma comes from middle sister Linda, the family organizer, who responds to Ben's news with a 'Good for her!' With Rachel aiding the sisters' search for mom back home, Ben sets out to look at the farm house he's considering moving his family to, Sam in tow. Property owner Mr. Harrison (Bernie McInerney, "The Peacemaker," "The Tavern") appeals to Ben's yuppie sensibilities, but Sam quickly takes the air out of the situation by bluntly pointing out the odoriferous consequences of septic tank runoff. Ben channels his frustration at seeing his dream so neatly derailed towards dad, criticizing his father for always coming up with a reason not to do anything, the probable cause of Muriel's departure. The ensuing argument causes an accident, stranding the two in autumnal splendor. Ben makes a bold move, showing his dad a letter written by his mother weeks before his birth expressing her deep disappointment with her life, something which Sam receives with anger and denial and which will be debated throughout the film. A tow later and Sam's found the dream of his youth, a 1940 Ford Deluxe, and the two set off on an ad-hoc vacation that will include fishing and camping, baseball and bar fights, and, of course, the discovery that father and son may not be so very different after all. Director Raymond DeFelitta ("Two Family House") takes a straightforward storytelling approach which focuses on Reiser's characters. Cinematographer Dan Gillham ("Final") is blessed with beautiful fall colors and his visuals are clear and crisp, boldly colored. Reiser's road trip is a nice mixture of comedy and semi-autobiographical observation, generous to Falk with Sam's many funny musings while allowing himself a number of succinct and pithy punch lines. There's a nice sense of balance between young and old, unrealized wishes and dreams fulfilled, things passed down over generations, in Reiser's screenplay. This is obviously a valentine to Falk and he runs with it, never overplaying the material, always pitch perfect. The role recalls 1995's "Roommates," where Falk played a guardian grandfather, but with less preaching and cloying sentimentality. Falk is particularly adept at the 'gotcha!,' turning an alarming gesture during a pool game hustle into one of the film's funniest gags and he even brings to the fart joke something like respectability. Reiser exhibits the level of exasperation that begins to drain reserves of Ben's affection. The duo are very convincing as father and son. Also good are the women back home, Perkins as the grounding, sympathetic wife, Dowd as the take charge sister and Lieber as the family complainer. Olympia Dukakis smooths over rough edges in a surprise late appearance as Muriel, although she bears little resemblance to Catherine Taormina, who plays the same character in flashbacks. The filmmakers have also taken care casting smaller roles, such as Marshall Efron's ("Two Family House," "Robots") garage guy, for maximum effect. "The Thing About My Folks" isn't ground-breaking or block-busting. What it is is an enjoyable, well made film which audiences of a certain age will relate to. It's Reiser's "Mad About Falk."