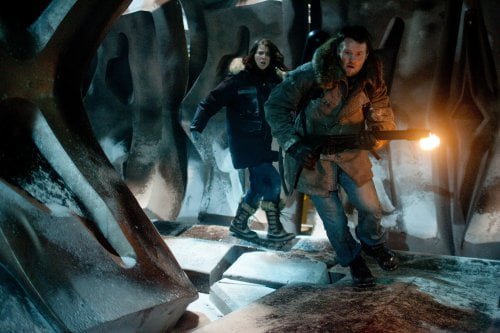 American paleontologist Dr. Kate Lloyd (Mary Elizabeth Winstead, "Scott Pilgrim vs. the World") joins a Norwegian research team at Antarctica's Thule Station after they discover a spaceship and a creature embedded in the ice for the past 100,000 years. But the creature frees itself and Kate finds herself partnered instead with the pilot who brought her there, Carter (Joel Edgarton, "Warrior"), when she figures out that the alien being takes on the characteristics of what it consumes, meaning any of her scientific colleagues may now be "The Thing."

Although it's being touted as a prequel, 2011's edition, adapted from John W. Campbell Jr.'s short story "Who Goes There?" by Eric Heisserer (2010's "A Nightmare on Elm Street," "Final Destination 5"), melds and hits most of the same beats as 1954's "The Thing from Another World" and John Carpenter's 1982 remake. But this one's really all about its special (and sometimes not so special) effects. Obviously and sometimes ploddingly directed by first timer Matthijs van Heijningen Jr., "The Thing" is also sloppy with its plot mechanics. One day as Dr. Kate's minding her own business with her iPod and a frozen wooly mammoth, she's visited by old friend Adam (Eric Christian Olsen) and his boss Dr. Sander Halvorson (Ulrich Thomsen, "Celebration," "In a Better World"), who says he needs a paleontologist to join him the next day for travel to Antarctica. Adam secretly tells Kate that he's never seen Sander more excited, which is odd given the one scowling expression Thomsen uses throughout the film. Twenty-four hours later Kate's staring open-mouthed at an enormous space craft buried 200 meters beneath the snow. When Sander says he wishes to extrude a tissue sample from the alien encased in ice back at the station, Kate objects. Sander pulls her aside and informs her in no uncertain terms that she's only there to do as he says and to remove the creature safely from the ice. Well, guess who's right? After Lars's dog's pen is found mangled and bloody and a Norwegian scientist killed by the creature, it's torched by Carter. Sander is more fascinated than repulsed by what they discover during autopsy, but Kate wonders why they've found the titanium plate from inside Henrik's arm outside of his intact body within the creature's digestive system. When she finds small pieces of metal in a blood puddle in the bathroom, Kate forms a strong theory just in time to flag down Carter's copter on its way to get medical attention for one of the team, but she's horrified to see it crash behind a mountain instead. Kate expounds her theory and the group agrees to quarantine itself, but even before they must consider what to do when Carter and his copilot inexplicably return, one of their own reveals something dreadful. The 1954 original, while not as faithful to its source material as Carpenter's version, had a strong Cold War theme which Heisserer tries to shift to European distrust of the U.S. He didn't try hard enough as it fails to cohere. The script is lazy, content with letting a monster loose in an isolated environment. We see Kate and Lars team up to disable all vehicles, and yet as soon as a third act chase scene is needed, two of them magically operate. The Thing is in two places at once from the onset without any explanation. The filmmakers care more about how they can make grotesquery of the human form than they do about their own story logic - once we learn how The Thing hides itself, it mostly ceases to do so unless the plot requires another unexpected jolt. And van Heijningen Jr. mostly fails to deliver them, because he so obviously absents characters he needs to come back altered. The film's best idea is its inorganic matter hook, one which its climax hinges on (and which is fairly easy to spot). U.S. filmgoers who object to subtitles should be aware that a goodly portion of the film is subtitled Norwegian. The film does end as Carpenter's began, but if a sequel is planned, we're only in store for more of the same.