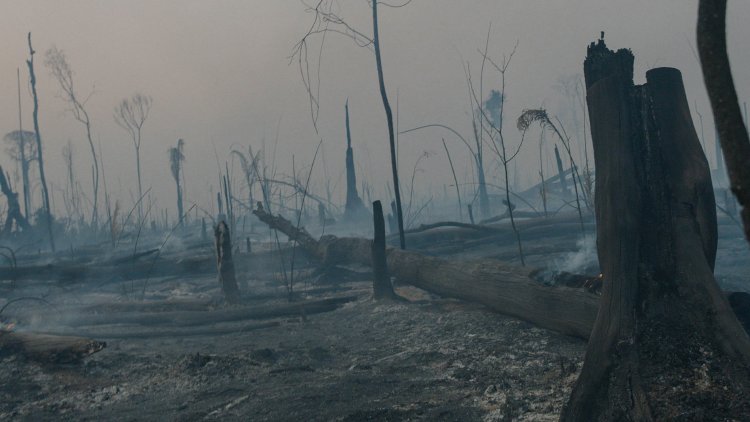 In 1993, the Brazilian government protected 7,000 square miles of rainforest for its Indigenous Uru-eu-wau-wau population, a population which today numbers under 200.  Only these people are allowed to live there, but threats from groups of organized farmers and individual land-grabbers who illegally clear-cut and burn down the rainforest are constant in “The Territory.”

Director/cinematographer Alex Pritz makes his feature documentary debut with this beautifully shot and multi-pronged perspective on a globally important subject.  While these type of activist documentaries can often invite an infuriating sense of hopelessness, Pritz highlights how the mentorship of 18 year-old Bitaté Uru Eu Wau Wau by environmental activist Neidinha Bandeira, a mother figure to the boy, has formed an effective 20 year-old leader utilizing new methods to fight back.  (Pritz himself also contributes, providing the training and technology for Bitaté to document on-going events.)

The filmmaker begins with sickening footage of Martins, an individual land-grabber, using a chainsaw to fell magnificent trees.  He comes in and out of the territory on a dirt bike, setting fire to the land before leaving.  Using a drone, Bandeira highlights how the Uru Eu Wau Wau territory is a bastion of defense against the deforestation of the Amazon, activity which has increased dramatically since the election of Jair Bolsonaro, who we hear proclaiming that there ‘won’t be an inch of indigenous land left’ to cheering crowds.  Without any government agencies to support her (we hear one group established to protect these lands claim to have nothing left to work with), Bandeira turns to independent journalists.

In addition to individuals like Martins, there is Sergio, a farmer who believes the Brazilian dream is to make one’s living off one’s own plot of land.  At 49, Sergio has only worked the land of others, but supported by politicians, has formed the Rio Bonito association, hoping to divide Uru Eu Wau Wau land into plots for 1,000 families.  While we can sympathize with Sergio’s lot, it is hard not to notice how much he justifies his actions, stating, for example, that he’s never seen an ‘Indian’ within the territory.  Pritz has no need to state the obvious as he shows these men clearing land for cattle, farming of which is a known ecological problem.

The young Bitaté gives us a window into his culture of generations living off the land, spear fishing and sleeping in hammocks.  Then they learn that Ari, an older man Bitaté looked up to as a defender of their land, has been murdered.  What to do when the government no longer has your back?  Seemingly caught between a rock and a hard place, Bitaté manages to turn the tide.  The fight is far from over, but there is hope for the future.

Pritz leaves us with contrasting images.  After having had to react to a kidnapping threat against her daughter and building high walls around her home because of death threats, we see Neidinha Bandeira peacefully floating down a river, lush growth on its banks.  Pritz goes in for a close-up of her relaxed face looking upwards, then switches to her point of view, a canopy of green life drifting by overhead.  She’s already told us about the loss of animal life and potential medical cures every time the forest burns, but here is something more spiritual.  With his closing credits, the documentarian shatters her peace with grim facts and footage of the destructive interlopers at work.  Years in the making, “The Territory” reminds us that while climate change affects us all, the Amazon rainforest is our most important ecosystem.

Brazilian farmers are trying to seize the protected lands of the Amazon forest natives. But, one indigenous leader, Bitate, and his mentor and environmental activist Neidinha Bandeira, stand between the interlopers and the forest and the little-contacted native Uru Eu Wau Wau tribe living in “The Territory.”

Just knowing the subject matter – the destruction of the Amazon Rain Forest because of sheer greed – I knew going into this environmental documentary that I would get pissed off. And, yes, I did.

First-time documentary feature filmmaker Alex Pritz does a fine balancing act in presenting both sides of the land battle taking place in Brazil. Of course, his heart, and mine, are on the side of Bitate and his Uru Eu Wau Wau clan whose very existence is being endangered by the farmers’ encroachment on their government-protected lands.

The farmers’ side of things – their “deserving” the land because the Uro Eu Way Wau people do not “use” it and it would be put to better productivity by raising cattle – gets its shrift. But, at the time the doc was filmed, the campaign and election of Jair Bolsonaro as President of Brazil was ongoing.

Filmmaker Pritz does try to present a balance POV here, but the preponderance of what is happening to our world at the hands of ignorant and empowered people is too much to deny. What the filmmakers show is a poignant indictment against greed and the destruction of our fragile ecosystem it is causing. I guess Gordon Gecko said it best to justify the destruction: “Greed IS good.” (Reference Oliver Stone’s “Wall Street (1986)”)