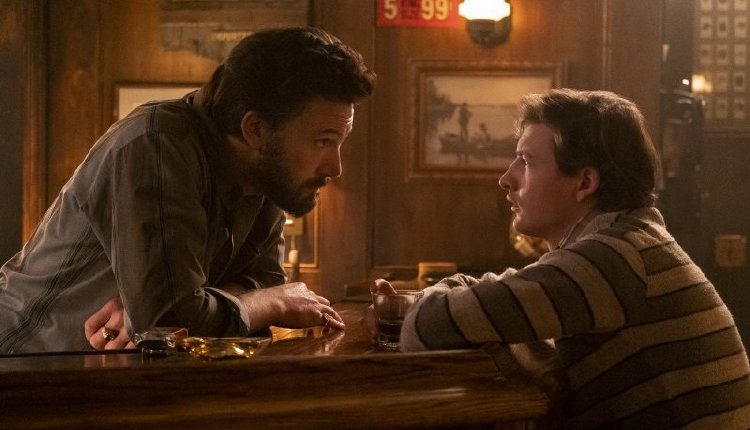 Before he became a journalist and novelist, J.R. Moehringer led a hardscrabble life, his single mom (Lily Rabe) forced to move back into her father’s (Christopher Lloyd) over stuffed home after being left high and dry by his deadbeat dad Johnny Michaels  (Max Martini, "13 Hours"), a famous NYC DJ known as ‘The Voice.’  But living under the roof of his grandfather came with a benefit in his mother’s brother Uncle Charlie (Ben Affleck), the well read neighborhood bartender who would guide him into adulthood, a central figure in his memoir “The Tender Bar.”

Director George Clooney ("The Midnight Sky") hasn’t formed much of a directorial voice since his 2002 debut “Confessions of a Dangerous Mind,” nor delivered on the promise of his sophomore effort “Good Night, and Good Luck.,” but with his latest, he has climbed his way out of the string of disappointments that began with “The Monuments Men.”  This charming coming of age story features an on point Affleck, delivering weirdly specific advice like ‘Never under any circumstance hit a woman, even if she’s coming at you with a pair of scissors,’ and standing up to clueless school councilors who use his nephew to hit on his sister.  The film isn’t a home run, its most central problem being the casting of the young (adorable and stunningly long-lashed newcomer Daniel Ranieri) and adult (Tye Sheridan, "The Card Counter") JRs, two actors who couldn’t conceivably be related, let alone the same person at different ages, but it’s an enjoyable coming of age film full of humor and heart.

The first half of the film finds JR learning about his family, including the disappointment of being stood up by his dad after being promised a day at the ballpark.  Gruff Grandpa (Christopher Lloyd) may resent having to house his extended family, but he surprises not only by taking JR to a school sponsored father and son breakfast but by breaking the news of his daughter’s cancer with tact and compassion (she survives it).  Then there’s the wonderful world of The Dickens, the book lined bar that is Charlie and his regulars’ domain, the same bunch of characters who will declare JR a prodigy for his prowess with Wordy Gurdy and make them their mascot for outside outings.

The second half of the film charts the teenaged JR’s college years and first love, Sidney (Briana Middleton) proving hard-to-get but strong motivation for JR to land his first serious job, an internship with The New York Times.  JR and Sidney have a serious class divide yawning between them, hilariously explored during a ‘meet the parents’ holiday weekend.  There is also a final reckoning with dad, the film’s most downbeat moment (and very reminiscent of “The Spectacular Now’s” third act).

Screenwriter William Monahan ("The Gambler"), who adapts  Moehringer's memoir, uses JR’s chance meetings with an Irish Catholic priest on a commuter train to punctuate transitions from past to present, a nice device.  But there are also a few problems here, non sequitur scenes like Charlie’s out-of-nowhere hospitalization for reasons unknown, as well as an ending that literally trails off into the sunset.  Massachusetts locations ably stand in for Manhasset, yet are more recognizable than many films shot in the Bay State (hello Wakefield Bowladrome!).

“The Tender Bar” acknowledges how adult influences, good and bad, contribute to the shaping of a young life.  If a delinquent dad leaves a gaping wound, a bachelor uncle might be just the remedy.

Young JR (Daniel Ranieri) and his mom, Dorothy (Lily Rabe), have been evicted from their home and have no choice but to move back in with her father (Christopher Lloyd). With his estranged dad (Max Martini) long gone, things could go from bad to worse for the boy, except for his Uncle Charlie (Ben Affleck) and the denizens of “The Tender Bar.”

I read a review after I watched “The Tender Bar” and it complained that the film denigrated fatherhood by putting JR’s rogue, long-missing dad in a bad light. It should praise, it said, the birth father. I understand the sentiment but, here, disagree strongly.

What I got out of director George Clooney and screenwriter William Monahan’s adaptation of J.R. Moehinger memoir is that it puts, strongly, the emphasis on fatherhood – the paternal process of raising a child – and not who the birth father is. In “The Tender Bar.” JR has not just one positive dad figure – his Uncle Charlie who instills words of real wisdom on the boy. He has all of the patrons of The Dickens who are on his side and support him in every way. It takes a village or, in this case, the inhabitants of a favorite watering hole, to raise a child.

The story is divided into two more or less equal parts with the young, pre-adolescent JR being nurtured, loved and encouraged by both his real and his extended families and older JR (Tye Sheridan) on his way to college and career. I prefer the earlier days in the younger JR life, mainly due to Ben Affleck’s full-bodied performance as Uncle Charlie, and the colorful, working class patrons of The Dickens.

Tye Sheridan, as the older JR, has a harder slog in this coming-of-age story. He is accepted to Yale University and, for the first time in his life, he must find his own way in life, love and career. It is a decent growing up story but I miss his family’s involvement in his life.

The words of wisdom that Charlie instills on his nephew could have felt clichéd and PC but here ring believable. He mentors the boy in the importance of honesty, hard work, kindness and reading. He will never let JR win so when he does win, he will have earned it. If that is not a good father figure, over the cad of a birth father, I do not know what is.