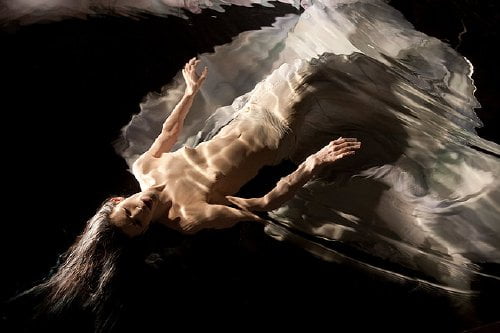 Banished from Milan by her traitorous brother Antonio (Chris Cooper, "The Town," "The Company Men") for practicing the Black Arts, Prospera (Helen Mirren, "RED") seizes an opportunity when she learns he is asea with King Alonso (David Strathairn, HBO's 'Temple Grandin'). Plotting to use her daughter Miranda (Felicity Jones, "Brideshead Revisited," "Chéri") to regain her duchy, Prospera bids her spirit Ariel (Ben Whishaw, "Perfume," "Bright Star") to shipwreck the royal party on her island by whipping up "The Tempest."

Writer/director Julie Taymor sprung from her successful staging of "The Lion King" on Broadway by adapting Shakespeare's 'Titus Andronicus' for the big screen as "Titus." It was a juicy, dramatic, slightly crazy adaptation. Now, 11 years later she tackles "The Tempest" and the result is far less successful. One can see splashes of Taymor's visual style (Caliban looks like he's emerging from the earth and recalls the blue-painted Hopkins of "Titus's" poster), but unless one is familiar with Shakespeare's play beforehand, "The Tempest" will be a confusing muddle, at times downright tedious. Things start off promisingly enough. A sand castle held within a palm disappears in the rain. Then we're presented with Prospera in a colorful robe that looks like it's made of quartz crystals howling at the top of a cliff. We see her head on, from one side, then the other, then a close up of her wild eyes. A ship is being tormented in a storm as if a toy by a larger than life Ariel. Then Miranda intervenes, begging mercy. Four men emerge from the sea - King Alonso, his brother Sebastian (Alan Cumming, "Titus," "Burlesque"), Antonio and elderly Lord Gonzalo (Tom Conti, "Saving Grace," "Shirley Valentine"). Alonso is convinced that his son, Prince Ferdinand (Reeve Carney), has perished, but Prospera has plucked him for her purpose, just as Ariel has hidden their ship in a bay. Meanwhile, Prospera's slave Caliban (Djimon Hounsou, "In America"), chafing at his servitude, is spotted by the King's jester Trinculo (Russell Brand, "Get Him to the Greek"), who uses him to take shelter from a storm. They are both joined by the King's drunken butler Stephano (Alfred Molina, "An Education"). Both groups will meet at Prospera's, the royal party edgy after a suspected but unconfirmed murderous coup by Antonio and Sebastian. Prospera continues to mold her plan via enchantments deployed by Ariel and her seduction of Ferdinand through the beautiful Miranda. Unusual casting sometimes enervates a work, but here it's just a mixed bag of hit and miss performances. Mirren is terrific as a female version of the wronged Prospero, commanding and cunning, and Whishaw is the film's most enchanting visual element, an androgynous spirit of the air, sea and the various creatures it inhabits (most spectacularly as a crow and frogs). Taymor hits us over the head with her gender-bending, though, pointedly altering the spiky haired, whip thin spirit into a long-haired waif with budding breasts. Still Prospera and Ariel are the film's most satisfying couple ('Do you love me?'). Jones and Carney are a thoroughly boring romantic pairing, not even the physical ideals which the roles would seem to call for, although Carney does sing some lines like the lead of a New Wave band. Cooper, so searing in one scene of "The Town" earlier this year, is a good physical match as Mirren's brother, but his performance is low key and downbeat. Cumming adds a little juice with a sprier take on the bard and the where-has-he-been Conti is fun as the chatterbox Gonzalo, still friend to Prospera. Hounsou is a strong Caliban but seems to be in an entirely different adaptation than Brand, who despite getting to pronounce one of Shakespeare's most enduring lines, is just plain silly, and Molina, who uncharacteristically lacks charisma. Watching this trio is like watching paint dry. Taymor's location production on the Hawaiian Islands is a mix of fairly straightforward filmmaking and magical effects, just like her cast. Ariel multiplies, divides, floats and flies apart. He's bees, he's a she. Prospera conjures up the Universe itself for her marriage of daughter and Prince, but only reminds one how much more spectacular Peter Greenaway's "Prospero's Books" looked. Prospera's abode is a minimalist affair of stuccoed walls with jutting timbers as stairs and a black, lava-like floor leading to a pool. It's rather odd, actually, a design whose budget ran out. Costumes by the Oscar winning Sandy Powell range from the inspired - Prospera's Robin Hood crossed with hand-crafted sea foam attire, Caliban's white-circled blue eye emerging from the crusted brown clods that house the rest of him - to the questionable - black royal wear zippered to a fair-thee-well - to the dull - Miranda's knotted, ragged dress. Brand's jester looks like an "Across the Universe" reject. Sound and/or performance often obscures dialogue. With the disastrous early runs of her Broadway "Spider Man" getting lots of press, and now this strenuous Shakespeare adaptation, it appears that 2010 is not Taymor's year. Maybe her musical will pan out yet, but "The Tempest" will never be tagged SRO.