The Talent Given Us 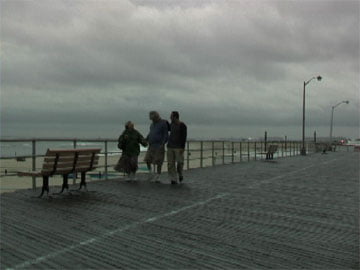 First-time writer/director Andrew Wagner creates an exception calling card that is a unique combination of true life and fiction in his debut, “The Talent Given Us.”

'Good judgement comes from experience and experience comes from bad judgement.' Barry LePatner Judith (Judy Wagner) is concerned that she hasn't heard from her son, Andy (writer/director/producer/cinematographer Andrew Wagner), in months so she makes a weird snap decision - the whole family, husband Allen (Allen Wagner), daughter Maggie (Maggie Wagner, "One Fine Day," TV's "James Dean") and the daughter from L.A., Emily (Emily Wagner, "Amy's Orgasm," TV's "ER"), who they've just picked up at La Guardia, will take a road trip to Los Angeles to see aspiring screenwriter Andrew. Along the way the Wagners engage in their own brand of family therapy in "The Talent Given Us." Andrew Wagner has accomplished something very unusual with his feature film debut. He's used his own family and taken them on the road yet no one in his film ever seems self conscious nor does this technically accomplished piece of work ever feel like a home movie. Yes, his sisters both have professional acting experience, but it is Judith and Allen who steal the show in this docudrama that could be utter truth or complete fiction. "The Talent Given Us" travels to some very unexpected places with its warts and all dissection of a family dynamic. At first, retirees Judith and Allen seem contented. Allen helps Judith over her crossword hurdles and they proudly watch Emily every week on "ER," little rituals of a normal life. But Allen has health problems - he's incontinent, impotent, has begun falling and suffers from a spastic, thrusting tongue which makes it difficult for him to talk and to be understood. We're taken aback when Judy confides to Maggie that she's dissatisfied with her non-existent sex life and wonders whether she should find a new life - is she kidding? Then we discover Allen is being secretive when we observe him attempting to get his trading floor job back (he's told he's outdated), but only tells his wife he met some old buddies for lunch. She's astonished to discover he's traded the family car for a mini-van - where did the money come from? We'll get the answers to both, eventually. Emily has embraced the ways of lala land and takes on the role of family therapist and roadside/poolside yoga instructor. The Wagners have the unsettling habit of openly discussing sex (Emily claims her mother's aggression made her a serial masturbator). Mom's casual use of the 'f' word belies her grandmotherly, pixie face. Allen becomes uncomfortable when his wife begins discussing his affairs in front of his daughters, but when cousin Bumby (Judy Dixon) joins the trek, a shared kiss between her and Allen provides a confessional moment for them both. The family constantly wavers between light-hearted camaraderie and laser-pointed soul searching. It is not surprising that one of their few tourist stops along the way is at The Menninger Institute (where Emily suffers some sort of spontaneous paralysis). Even the missing Andrew gets in on the act. When Judith and Allen arrive at his apartment, where his Spanish speaking housekeeper responds to questions about his whereabouts in both the affirmative and negative, Emily gives them synopses of Andy's screenplays, works with titles like 'Hunting the Vicious' and 'Loves Lies Bleeding.' While Andy does make an appearance when we least expect him (and delivers the film's funniest line), he is nonetheless present throughout as the invisible digital cameraman. Wagner achieves extremely tight shots, even in scenes exterior to the traveling van, but his movie never feels claustrophobic nor does it suffer from hand held jitters. Sound is extremely well done for this little type of indie (boom and mike by Tommy Hines, mixing by Richard K. Allen) and simple scoring by David Dyas fits the bill. 2005 has seen the emergence of several new talented American filmmakers, from "Junebug's" Phil Morrison and "Winter Solstice's" Josh Sternberg to "Funny Ha Ha's" Andrew Bujalski and "Assisted Living's" Elliot Greenebaum. Add Andrew Wagner to that list - in finally achieving his dream, he's added a new voice to independent filmmaking.

Using his own family as his cast – father Alan, mom Judy and sisters Emily and Maggie – Wagner weaves a tale about a mother who wants to reconnect with her son, Andrew. When Alan and Judy meet two of their son’s former teachers she is embarrassed that she and Andrew rarely talk anymore. Both teachers ask that Judy convey how much they want him back, to teach, at his alma mater. On the way to a day at the beach with their daughters, Judy decides that she must see her son face to face as soon as possible. Afraid to fly, Judy agrees to make the cross country trek from New York to LA, with Alan, Emily and Maggie, by car. But, her resolve to make the trip is sorely tested along America’ s highways and byways as all the dirt and buried animosities in the family’s past are dug up. ” The Talent Given Us” is courageous film on several levels. That Andrew Wagner has the chutzpah to cast his family in his film is one level. The raw performances that he garners from his non-professional actors - mom and dad - are another. Judy Wagner, especially, comes across as a seasoned veteran who has been on screen for years, giving an unabashed, powerful performance of a woman changed by her journey of discovery. Wagner’s script, too, pulls no punches as he pulls away the layers of his characters. The Andrew Wagner one-man production team, using handheld camera, gives “The Talent Given Us” a documentary feel, blurring the lines between fact and fiction. His script keeps you guessing as to what is invention and what is real as his parents talk about divorce and infidelity. His sisters, Emily and Maggie, are so New Yawk that they seem hand picked by a casting office. Alan Wagner makes his character into a believable being resigned to the treatment by the femmes in his life. The unwashed talent and originality of “The Talent Given Us” makes it a compelling and fascinating film. The mix of fact and fiction and assured direction make this a truly unique, entertaining experience.