The Tale of Princess Kaguya 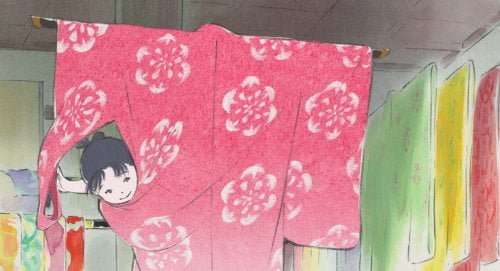 A poor bamboo cutter plies his trade in the remotest part of Japan. One day, while harvesting bamboo, he comes upon a new shoot that shines brightly from within. What he sees is a diminutive, beau child that fits in the palm of his hand. He takes this tiny treasure home to his wife and the couple decides to raise the child as their own in “The Tale of Princess Kaguya.”

Hiyao Mizayaki isn't the only great Japanese maker of hand drawn animated films at Ghibli Studios. Its cofounder, writer/director Isao Takahata ("Grave of the Fireflies"), has adapted the 10th century The Tale of the Bamboo Cutter as "The Tale of Princess Kaguya," a stunningly beautiful watercolor rendition about the girl sent from the moon to live among humans to atone for a sin. The story itself is a bit strange. Kaguya is found by the poor old bamboo cutter inside a glowing bamboo stalk, but when he brings her home, his wife takes the tiny royal and Kaguya immediately turns into a human child. Takahata's depiction of the baby is delightful as she rolls and crawls, learning movement from a frog, but this child grows rapidly, forming a relationship with young Sutemaru. But this true love is not to be as her beauty becomes known far and wide, drawing the attention of the Emperor and five noble suitors, each of whom she sets an impossible task for in order to gain her hand in marriage. Takahata injects humor into his story as the lowly bamboo cutter and his wife find their stations elevated to a royal household, but the film ends in melancholy as Kaguya experiences the joy and sadness of human life. In one scene of astonishing power, the filmmaker changes from pastel lyricism to impressionistic jagged blacks and reds as Kaguya flees her home. Grade:

It is the first Sunday of spring in the tiny kingdom of Doria and that means its time for the highly anticipated Soup Day Festival, when the latest royal soup is introduced. Roscuro comes ashore and is drawn to the smell of the scrumptious potage. His accidental falling into the middle of the festival results in the sudden death of the queen. The king, in despair, bans the festival forever and the kingdom is cast into a never-ending gloom, without sunshine or rain. Roscuro ends up in “the dungeon,” the dark underbelly of the castle where the rats live. His one desire is to be out in the sunshine and have a breeze on his face. Little Despereaux is unlike any other mouse. While the rest of the mouse population lives in fear ­ of everything ­ his motto is honor, justice, truth and courage. The diminutive D fears nothing and has an unquenchable thirst for knowledge. Unlike his fellow mice, he would rather read a book than eat one. When the king’s grief envelops Doria, Despereaux makes it his task to return the sunshine and the rain. Miggery Sow grew up on the pig farm owned by her foster parents. Her big dream is to work and live in the distant castle. When the dream comes true, the reality of her peasant upbringing is obvious, making her jealous and envious of Princess Pea. She, Despereaux and Roscuro become an unlikely trio of heroes that join forces and they fight to restore Doria to its former glory ­ and bring back Soup Day. As you can tell by the three separate, intertwining plot threads ­ Despereaux’s, Roscuro’s and Miggery’s ­ this is a far more complex anime than the ad campaign implies, which aims at the kiddie audience. The sometimes scary story is, instead, really for older kids and adults. There are too many layers and too much subtlety to this serious animation to keeps the younger tots’ interested. The 2D animation, though rather darkly hued, is crisp and clear and attentive to details like the hair movement of the title character. Parents beware, “Despereaux” is not for the little ones. But it is a good one for age 10 on up.