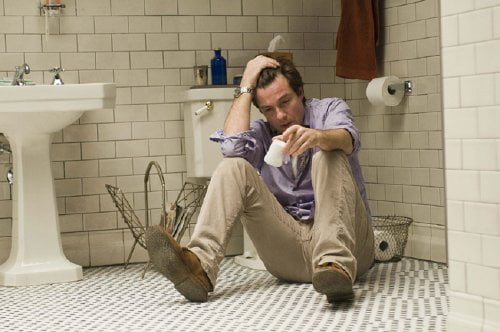 Once she hit 40, Kassie Larson (Jennifer Aniston) gave up on waiting for a man to have a baby. Seven years after she resorted to a turkey baster bearing a sperm sample, though, she finds out about how her male best friend, Wally (Jason Bateman), made "The Switch."

Jennifer Aniston hasn't been hitting the romantic comedies out of the park lately, yet somehow her likability factor hasn't been hurt too much. But "The Switch," adapted by Allan Loeb ("Things We Lost in the Fire," "21") from a short story by "The Virgin Suicides" writer Jeffrey Eugenides, doesn't focus on her pregnancy, the way Jennifer Lopez's "The Back Up Plan" did earlier this year. Instead it's a combination of the age old romcom conundrum of two people obviously made for each other being kept apart by preconceived notions and lack of nerve crossed with a terrific character study by Jason Bateman as neurotic New Yorker Wally falling in love with his six year old son Sebastian (Thomas Robinson, a real find). Add in terrific, off beat support from Jeff Goldblum as Wally's boss Leonard and Juliette Lewis as Kassie's closest female friend and you've got a film that charms more often than not. Even Patrick Wilson ("Nightwatch," 'The A-Team"), as Wally's rival Roland, isn't your typical romantic foe as Wilson plays him as a good enough if slightly clueless guy who's making no inroads with the decidedly odd Sebastian. The film starts a little awkwardly with narration from Bateman sounding like it's coming in over a phone line and more than one needed to know information about scrotal growths and cervical mucus. We learn that Kassie and Wally have a romantic past that they mutually turned into friendship, although it is quite clear that Wally's been carrying a torch ever since. When Debbie convinces Kassie to throw a 'getting pregnant' party, complete with Heathen rituals and the donor Roland (and, ick, his wife), Wally gets really drunk and ends up in the bathroom where Roland's sperm awaits. Not too hard to figure out what happens, but Wally himself doesn't put things together until years later, having succumbed to a blackout only backed up by the 3 a.m. drunken ramblings on Diane Sawyer and a Viking which made no sense to Leonard at the time. "Blades of Glory's" Josh Gordon & Will Speck wouldn't seem like the right match for a romantic comedy and perhaps that's why just about everything works better than the romance and its subsequent triangle (they even include a version of the stop the wedding cliche). They've gotten a terrific performance from Bateman, who not only creates a sympathetic lonely guy, but does some great physical comedy - he makes throwing up in a trash can feel fresh. Wardrobe helps (he's known for his sweater vests, but begins shopping at Barney's when Kassie returns to the city), but it's up to Bateman to create the signature tics that he will see in his son (a propensity to moan while eating, lack of athletic ability). Young Robinson is terrific, the odd and serious as death little boy with a perpetual look of sadness that disappears in a flash when he sees 'Uncle Wally.' His bizarre habits (collecting picture frames, kill shelter themed birthday parties) are nicely melded into the script. He has nice chemistry with Aniston, playing a somewhat indulgent mom. If only she could stop playing straight man to her leading men. Goldblum and Lewis are so strong one wishes an implied attraction in the film's final scene had been taken a step further. "The Switch," whose title was changed from the better but less pertinent "The Baster," won't become a milestone of the genre and may not even be all that memorable in the scheme of things, but some odd situations good performances and slam dunk Bateman/Robinson teaming make it fun and even touching.