The Sun Is Also a Star 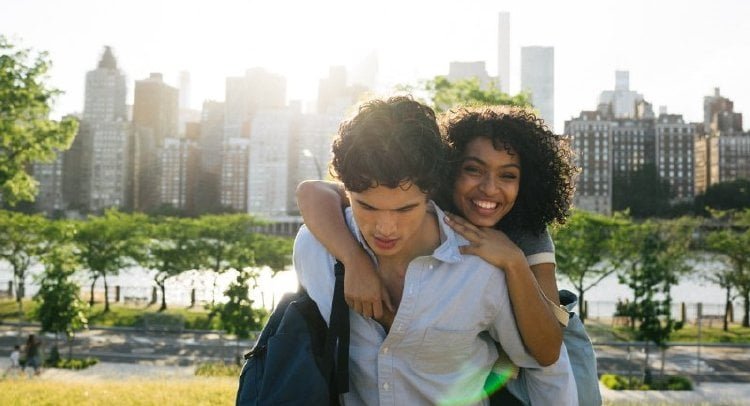 Daniel Bae (Charles Melton) is in New York City for a college admissions interview when he experiences love at first sight. But the woman his gaze has fallen upon, Natasha Kingsley (Yara Shahidi), not only may only have 24 hours left before being deported back to Jamaica, she resists notions of romantic soul mates. Nonetheless, Daniel convinces her to see if she will fall in love in just one day in “The Sun Is Also a Star.”

Nicola Yoon’s “Everything, Everything” was a gimmicky teen romance with a twist one could see coming a mile away that nonetheless worked because of the charisma of its young stars and the imagination that went into its production. Her latest novel’s big screen adaptation (by “Girls Trip’s” Tracy Oliver) is also gimmicky and predictable, but it is also nonsensical and devoid of logic, a love story that requires such a huge suspension of disbelief only senseless romantics will be able to bridge it. It is telling that Yoon uses ‘Deus ex Machina’ as a plot point, a phrase itself used to describe a contrived plot point! Both Daniel, the son of Korean immigrants, and Natasha are dealing with parental choices on the day they cross paths. Daniel’s parents have wanted him to become a doctor since before he could walk, their faith in him having driven a wedge between he and his resentful brother Charlie (Jake Choi). Tasha’s folks are resigned to their family’s deportation, demanding she return home from her last ditch efforts to turn things around. He first spies her in Grand Central Station, struck because she is the only one looking up at its starscape ceiling. When she turns and he sees ‘Deus ex Machina’ on the back of her jacket, a phrase he’d just written that morning as ‘inspiration,’ he knows they are fated to be together. When he loses her in the crowd, he believes he will find her again and sure enough he ends up one subway car away. Rushing up onto the street behind her, he is just in time to pull her from the path of a reckless driver. Over coffee at Greenwich Village’s Café Reggio, Daniel promotes his fateful theory, but Tasha is rooted in scientific fact, stating that ‘love’ is merely hormones. He gives her his five factors for falling in love, stating that they definitely already have the ‘X-factor,’ and gets her to agree to answer ten questions followed by four minutes of looking into each other’s eyes. Unbeknownst to her, he’s postponed his appointment to the following day, but when she races to make hers, he follows, discovering they were both headed to the same office building (further developments of this coincidence prove utterly ludicrous). As their day (and evening, and next day) progresses through a trip to the Bae family’s Harlem Hair Care Store, the Hayden Planetarium, a karaoke club and Roosevelt Island, it will come as no surprise that Tasha’s belief in analytical data is no match for the commitment of a dashing stranger. This one’s stars are both so gorgeous, they look like they’ve just stepped out of a Vogue fashion shoot. Yes, they spark on screen, but their physical perfection doesn’t make this story any more relatable. Production designer Wynn Thomas has chosen NYC locations which fit the movie’s poetic theme and the Korean and Jamaican backgrounds of its central characters, as does the film’s soundtrack selections (Tommy James & the Shondells’ ‘Crimson and Clover’ is a centerpiece). Cinematographer Autumn Durald (“Palo Alto”) also works to raise the movie above the usual Hollywood sheen, mixing it up with handheld close-ups, color filters and Steadicam work. But despite these filmmakers’ best efforts, the adaptation loses us the more it progresses, characters defying previous behavior. Ry Russo-Young’s (“Before I Fall”) direction of Melton over emphasizes seductiveness to the detriment of his character while also failing to fill in general logic gaps. “The Sun Is Also a Star” is for those who swoon at the drop of a hat. Others will find it lovely to look at and easy to listen to in a persistent state of disbelief. Grade: