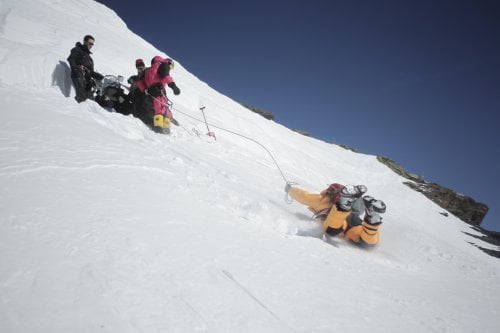 On a picture perfect day in August, 2008, 22 climbers assembled at High Camp on K2 in the Himalayas, the world's 2nd highest and deadliest mountain with a fatality rate of one in four climbers. But this would turn out to be the darkest day in the history of the sport and half of these people would lose their lives in their quest to reach "The Summit."

This tragic tale is being marketed as a mystery, mainly because the press coverage of what happened at the time was mostly based on interviews with rescued Italian climber Marco Confortola, whom Sherpa climber Pemba Gyalje described as having gone temporarily mad from the severe conditions at high altitude. Yet although certain details remain unknown because there are no survivors to tell them, filmmaker Nick Ryan pretty much lays out the events. If only he'd done so in a more coherent fashion. After establishing just why K2 is so treacherous (above 8,000 meters the body literally starts to die, affecting the mind's ability to make decisions), Ryan begins throwing interview subjects at us, including those who survived that day, the family of Ger McDonnell (the first Irishman to reach the summit about whom the 'mystery' revolved) and Walter Bonatti, a member of the first successful 1954 expedition who warns that getting back down from the summit isn't the easy part. We're immediately given glimpses of what went wrong, climber Dren Mandic sliding away at 11 a.m. in the morning, the others quickly deciding to continue their ascent. From this point on, though, Ryan jumps backwards and forward and while this can be an effective way to tell a story, here it undercuts it. At one climatic 2008 moment, we're suddenly back in 1954, yanking us out of the main story with little elucidatory reward. Ryan's main focus appears to be to correct the media representation of 'sheer stupidity' and 'inexperienced climbers,' the base camp having the 'smell of death.' He does succeed in doing that (when Pemba, who remained on the mountain for 90 hours, had finally hiked down, the media had departed), but although Ger McDonnell is held up as a hero (after Marco recounts his having 'wandered away' from climbers in distress), his story is not a clear through line. Better is Ryan's presentation of how many climbing teams (Korean, Norwegian, Dutch, French, Serb and American) joining forces may have had a detrimental psychological effect on the outcome. Strong personalities, like blunt Dutch leader Wilco van Rooijen and astute solo Basque climber Alberto Zerain, emerge while others remain indistinct. Female climber Cecilie Skog from Norway recounts one of the most emotional stories as she saw her husband disappear in an ice fall. Borrowing a page from Kevin MacDonald's "Touching the Void," Ryan recreates scenes which were not availabe from any of the climber's footage (these were shot in Switzerland). He also achieves some astounding aerial shots of K2, but the film's most magical footage, a Himalayan vista from the summit that shows the shadow of 'Savage Mountain' rising like a phantom pyramid on the Chinese side of the range, came from a climber's camera. "The Summit" recounts a harrowing tale of endurance, heroism, majesty and human psychology, but for a sport defined by slow, steady progress, Nick Ryan simply jumps around too much.