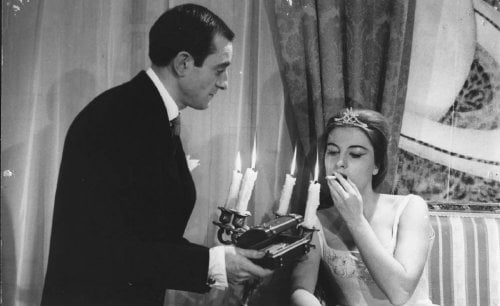 Pierre (Pierre Étaix) spends his days in his room studying the moon and astronomy until one day his mother (Denise Perrone) decides it's time that he got married. The naive young man tries to propose to Ilka, their Swedish Au-pair (Karin Vesely), but she doesn't understand a word he says, so Pierre must go out into the world and try to become "The Suitor."

Cowriter (with Jean-Claude Carrière, "The Discreet Charm of the Bourgeoisie")/director/star Pierre Étaix once wrote for Jacque Tati and has appeared in films as disparate as Bresson's "The Pickpocket," Jerry Lewis's lost "Day the Clown Cried" and more recent films like "Micmacs" and "Le Havre." And yet here is a French filmmaker I had never heard of until his films were recently rediscovered after years of rights issues and new restorations. Inspired by classic silent cinema slapstick and of the school of Tati, Étaix's first film grabs us from the get go with a one-two punch of great visual fakeout gags. At first, Pierre attempts to learn the art of woo by observing another man's success at an outdoor cafe, but when he attempts to replicate it, he ends up first with a young mother, then an old woman. The next pickup trick he tries backfires when, picking up the tab for a beautiful young woman (Laurence Lignères) who's been stood up, she proceeds to get drunk on champagne. His final amour is famous singing star Stella (France Arnell), but despite his success in getting backstage access, what he finally encounters is not what he'd expected. It's really no surprise how it all ends, except that Etaix always turns things on their head, wrapping with an amusing inversion of the classic train station farewell. Etaix works with classic material like language barriers (Ilka) and misidentified objects (his father's (Claude Massot) pipe smoke is frequently blamed for more serious conflagrations). His mother and father's relationship is a nicely developed comedic subtext. But with his first film, although Etaix starts strong, his second half begins to flag, the jokes less inspired. Still this 1962 black and white film is a charmer.