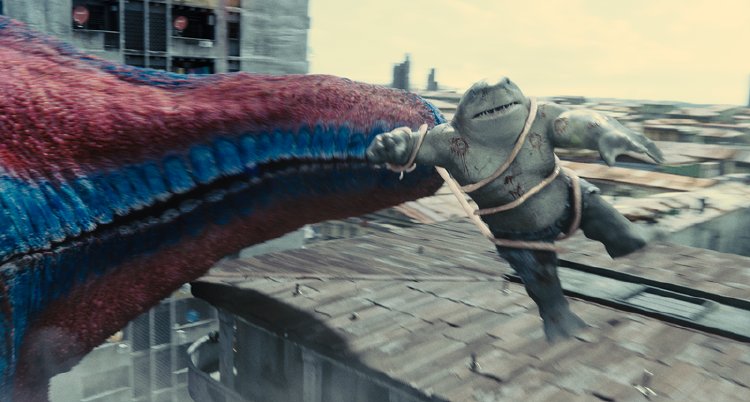 As Johnny Cash’s ‘Folsom Prison Blues’ plays in the background, Savant (Michael Rooker), a mean looking inmate with long white blond hair bounces a small red ball in an outdoor pen at Belle Reve Prison, then ricochets it around the walls to kill a sweet little songbird.  That ‘talent’ is why he’s been tapped by warden Amanda Waller (Viola Davis) to have an explosive device implanted in his brain as part of her Task Force X, and Savant is not pleased at being part of what is more commonly known as “The Suicide Squad.”

After he was fired from Marvel due to some right wing shenanigans involving old, snarky shock posts, writer/director James Gunn ("Slither," "Guardians of the Galaxy") was lured into the DC universe.  The filmmaker with a predilection for the less squeaky clean among us, including talking members of the animal kingdom, gravitated towards giving his favorites, the Suicide Squad, a fresh look – providing he could deliver them in R-rated fashion.  And that he does, although with that tongue in cheek humor that even infects his R-rated gore and his signature needle drops, like The Jim Carroll Band's 'People Who Died' which hilariously accompanies the film's opening credits.

Colonel Rick Flag (Joel Kinnaman) accompanies Savant along with Captain Boomerang (Jai Courtney), Weasel (Sean Gunn), Blackguard (Pete Davidson), T.D.K. (Nathan Fillion), Mongal (Mayling Ng), Javelin (Flula Borg) and the late arriving Harley Quinn (Margot Robbie) on a military transport to Corto Maltese where they are tasked with eradicating The Starfish Project which the U.S. Government believes could become cataclysmic in the hands of Presidente General Silvio Luna (Juan Diego Botto).  Back at Waller’s command center, bets are taken as to who will be offed first by her communications staff as they watch the team jump into the water just off the beach, Waller annoyed that no one checked on whether Weasel could swim or not.  It will only be after Harley advances into the jungle after Flag is captured that we realize this is a two-pronged mission, a second team led by Bloodsport (Idris Elba) comprised of Peacemaker (John Cena), Ratcatcher 2 (Daniela Melchior) aka Cleo Cazo and her rat Sebastian, King Shark Nanaue (voice of Sylvester Stallone) and Polka-Dot Man (David Dastmalchian).  Also on their side will be Sol Soria (Alice Braga), a guerilla fighter against Luna’s command.

Much of the humor is derived from intra group squabbling, these criminals not having come together for any other reason than Waller’s agenda.  Bloodsport is freaked out by Ratcatcher 2’s rats, a development Gunn uses for some of his signature heart when we find out why (on both sides, too, Ratcatcher 2 reminiscing about her dad, original Suicide Squad character Ratcatcher (Taika Waititi, one of the handful to have appeared in both Marvel and DC movies)).  No one’s fond of Shark King because of his tendency to scarf down anyone in his path when he’s hungry – until, that is, Ratcatcher 2 takes pity on him when she learns he has no friends.  When the going gets tough, the always competitive Bloodsport and Peacemaker will have a showdown for the ages.  And for a while, at least, it appears Harley Quinn will be on the outs with everyone when she embarks on a whirlwind romance with Luna, who is convinced she should be his Queen (fortunately she’ll turn all black widow…).  Polka-Dot Man, who, yes, wields polka dots, wrestles with his own, outsized mother issues, visualized to humorous effect.

Gunn’s screenplay doesn’t shy away from political commentary while he’s generally having a blast righting the Squad ship left floundering in 2016.  It is no surprise that this Suicide Squad has a very Guardians feel.  The film does fall into the Super Hero movie trap of over extended, bloated climaxes, but it is a bit easier to forgive when we’re watching a talking man shark trying to take down a giant pink starfish.  The production is first rate, Panama standing in for the fictional Corto Maltese.  Most of the stunts performed here are real, Gunn shying away from CGI except for its more obvious uses (and only letting us down with blatant fakery in one late scene where Harley ‘surfs’ over crumbling building roofs).  John Murphy’s hard driving rock score is as spot on as Harley's 'Live Fast, Die Clown.' leather jacket.  “The Suicide Squad” and its cast are a blast.  (And yes, stick around for two scenes during the end credits for a couple of surprises.)

Since I did not see the first “Suicide Squad (2016),” not even on cable, I did some digging to find out what it was all about. From what I can see, the concept seemed like a good idea, with lots of colorful characters and noisy F/X, but mishandled and confused. Fortunately, I did my looking up after the fact of seeing “The Suicide Squad” so I was not unduly tainted by its predecessor. (Although, I did see “Birds of Prey” and thoroughly enjoyed Margot Robbie as Harley Quinn. That joy spills into “TSS.’’)

Writer-director James Gunn takes over the reins for this sequel-reboot-reimagining from David Ayer, and I think the “Guardians of the Galaxy” helmer proves the perfect match for the job at hand.

When Task Force X’s mission goes bad, US government spy chief Amanda Waller (Viola Davis) must put a new team in to attack the bad guy stronghold on Corto Maltese. She assembles a bevy of Belle Reve Prison’s criminal minds – Peacemaker, Bloodsport and a bunch more, including Harley, to defeat an evil plan for extraterrestrial invasion.

That’s about all I have to say about the movie’s “plot” which, for what it is worth, tells something of a story about an alien invasion and evil government scheme. That did not matter to me – and never does when it comes to DCEU and MCU flicks. What I hope for, in these worlds, are characters I can take a liking to. I mentioned Harley Quinn but also enjoyed the sullen burn of Bloodsport (Idris Elba) and the muscle head Peacemaker (John Cena) and the rest of the colorful team. The fans know them and that is what counts.

Now, a criticism: there is absolutely no need for a two hour and twelve minute superhero movie and “The Suicide Squad” is a case in point. At about the ¾ point there was a logical, fun and satisfying end (again, in my mind) that would have garnered a higher grade from me. But, this is a DCEU and, for the last 30 minutes or so, there is a lot of action, noise, explosions, fights, F/X and rapid banter. I like my version better.

And, a praise: If you sit through the credits and pay attention you will see that the real heroes of “The Suicide Squad” are not the movie stars or the effects mavens. It is the huge list of stunt people involved in the making of the copious action. If you pay attention, you will see these talents on ample display even with the eye candy F/X. To me, the old ways, like actual stunts, are better.

Warner Brothers is releasing "The Suicide Squad" in theaters on the evening of 8/5/21 and it will premiere on HBO Max on 8/6/21.