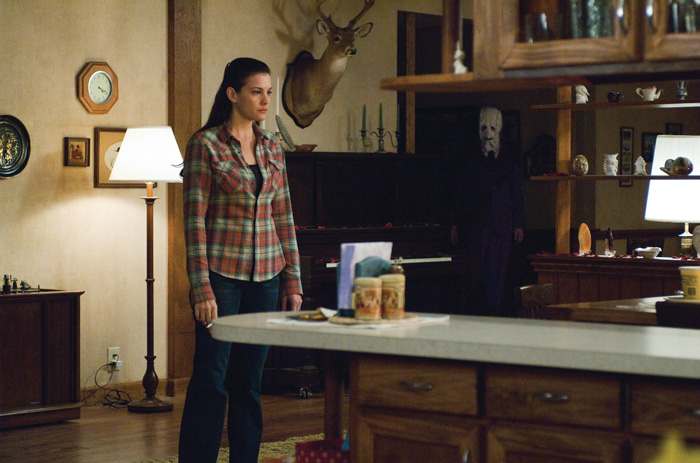 A young couple exit from a friend’s wedding but neither is none too happy. James (Scott Speedman) had made plans to use the day to propose to Kristen and begin their own life toward wedded Bliss. He didn’t expect to get turned down. In silence, they head toward his family’s remote summer home to stay the night. Their problems, it seems, will take a dramatic turn when they are visited in the middle of the night by “The Strangers.”

After a wedding reception, a seemingly happy couple endure a long drive home in silence. Kristen McKay (Liv Tyler, "The Lord of the Rings: The Return of the King") has upset the balance of the relationship by not accepting James Hoyt's (Scott Speedman, TV's "Felicity," "Underworld: Evolution") proposal of marriage. Already emotionally shaky, things will get worse when James and Kristen overnight at the Hoyt family summer home and receive a middle of the night visit from "The Strangers." The theatrical trailer for "The Strangers" promised a true freak out, an unsettling film with extreme nightmare potential. As a horror fan, I had high hopes for Bryan Bertino's writing and directing debut based on the Manson slayings (and presumably that family's habit of 'creepy crawling,' a form of practice run where the drug-addled sociopaths would enter and exit a family home undetected). Bertino exhibits several nice touches with his first film, which begins well, but a good premise alone does not make for a successful film. James Hoyt has set the stage for romance at his old family home. Red rose petals are scattered everywhere (a nice foreshadowing of later blood letting), champagne is chilling and dad's old turntable is at the ready. The broken mood is underlined by James and Kristen's passing of the champagne bottle, ignoring the more civilized flutes James had set out. While Kristen takes a bath, James calls his best friend Mike (Glenn Howerton, TV's "That '80s Show," "Must Love Dogs") and leaves a message asking him to come and pick him up as early as he can. At 4:05 a.m., there is a loud banging at the front door. James cautiously opens it to find a young girl (model Gemma Ward) not illuminated by the porch light. 'Is Tamara home?' she asks. After this weird incident, Kirsten notes that she is out of Marlboros and James jumps at the chance to go for a ride to pick up more, even after nonchalantly discovering that that front light bulb had been unscrewed. Left alone, Kirsten endures more banging and begins to find things in different places than she left them. The fireplace flue is closed and smoke pours in. We see a man in a creepy sack mask observe her unnoticed from the home's hallway. But "The Strangers" quickly falls apart. It is riddled with continuity errors (an hour's worth of action within the minute of 4:35 a.m.; a now-you-see-it, now-you-don't hand bandage; a complete, unexplained wardrobe change at film's end), stupid victim behavior cliches (splitting forces at the worst possible moments, neglecting to tell partner pertinent facts, spraining ankle while running!) and inconsistencies (Dollface is seen from a window then is gone a second later, defying physics; the murderers remain masked until it is clear they intend to leave no survivors, yet *stop* and reveal their faces to people obviously headed to discover the crime). The film's first killing is all too obvious and it's aftermath cause for more nonsensical behavior during the movie's midsection, where an opportunity to really play with psychological torture is left wanting, excepting a nice bit owed to "Halloween" (sack mask also has a habit of tilting his head to the side, just like Michael Myers). "The Strangers" does not fail due to its acting, which, except for a couple of zombified late supporting players, is fine. Considering all those sloppy continuity gaffes, other tech credits are quite good, from the moodily lit cinematography (Peter Sova, "Donnie Brasco," "Wicker Park," "Gangster No. 1") to a jarring use (overuse, as the film goes on unfortunately) of sound. Still, it is difficult to take a film seriously that pulls you outside of its world with so many jarring errors. This is a movie that begins with its heroine's 911 call but has no viable way of incorporating that call into its own unfolding logic.