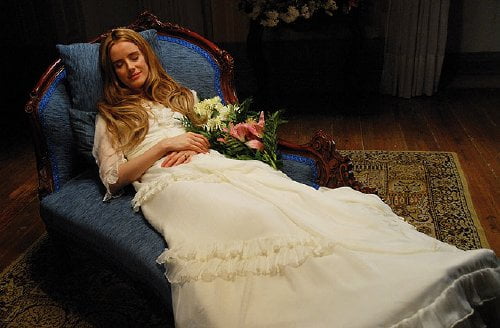 One late, rainy night, in a town in Portugal, a young Jewish photographer, Isaac (Ricardo Trepa), is summoned to the estate of a wealthy local family to take pictures of their just-deceased daughter. While looking through the viewfinder of his camera, the young woman comes to life, opening her eyes and smiling at Isaac. Thus begins “The Strange Case of Angelica.”

Well past a respectable hour, a photographer's wife is called from the street for the immediate services of her husband. She tells the stranger her husband is out of town, but a passerby recommends a Sephardic Jew, Isaac (Ricardo Trêpa, "A Talking Picture"), for the job. Isaac is informed by his landlady Justina (Adelaide Teixeira) that he is being summoned by the Portas Estate, a very important family, and so Isaac goes and learns he is to take the picture of a young bride who has suddenly passed away in "The Strange Case of Angélica." Writer/director Manoel de Oliveira's ("The Convent," "A Talking Picture") latest was made when he was 102, an amazing feat, but while his film looks stunning and is sprinkled with twinkly humor, his contemplations on the link between life and death and the present and the past are too simple and his lead character too uninteresting to sustain a feature length film which may be over praised out of respect for its creator. Still, there are enough pleasures to be found here to recommend it for serious cinephiles. Isaac is greeted at the estate by Maria Delores, the sister of Angélica and a Catholic nun who is quite taken aback to hear the name Isaac (religious differences made meaningless by death?). He's taken in to where Angélica lies on a chaise dressed in her wedding dress, a dreamy smile on her lips. When he looks through his lens, her eyes open and she smiles at him. He quickly takes a few shots and leaves hastily. After this, Isaac becomes obsessed with the dead young woman, but not so much so that he does not also pursue photographing a group of men who are digging in the vineyards on a hill across from his room's balcony. His landlady is disgusted by his chosen subject, especially since they are doing the work in such an old fashioned way. At night, the ghost of Angélica appears on his balcony, wraps her arms around him and they ascend to float through the sky. Isaac visits the cemetery, where he is consistently hit up for money from the resident beggar. Justina is concerned when Isaac doesn't come down for breakfast. On three such occasions Oliveira repeats their dialogue. Justina's other guests, Rosa, a doctor, an engineer and a visiting female engineer from Brazil, discuss matter and anti-matter (a clear connection to life and death) and a bridge project delayed due to the economy. Justina's cat stares at her caged bird until everyone leaves the room. A dog barks. Angélica's mother (Leonor Silveira, "A Talking Picture") is annoyed that he takes so long to bring the portraits and sends for him. A goldfish in a bowl is prominently featured on her desk. Both before and after the meeting, a Portas domestic (Isabel Ruth) is annoyed to hear Isaac call out to the dead girl. Angélica's ghost becomes more fleeting, tied more directly to Isaac's dreams. Oliveira frames his subjects very deliberately. Isaac is often centered, an open doorway behind him, the camera static. Angles in the sloping of streets or the planting of vines cut across the screen. Isaac stands in the extreme left foreground looking out the window as the angled breakfast table hosts those heavily aware of his presence pretending not to notice his odd withdrawal. Isaac's dream journey with Angélica is in black and white, a weird mix of a modern recording of an event evoking the past, like the pseudo-silents of Guy Maddin. The obsession over a dead woman recalls Otto Preminger's "Laura," where Dana Andrews fell in love with Gene Tierney's portrait. Here, Isaac actually takes the portrait, but its subject's resurrection is all in his head. "The Strange Case of Angélica" is a whimsical fable, the meditation of a very old man looking to the past, looking towards death. It has the impact of a half smile.