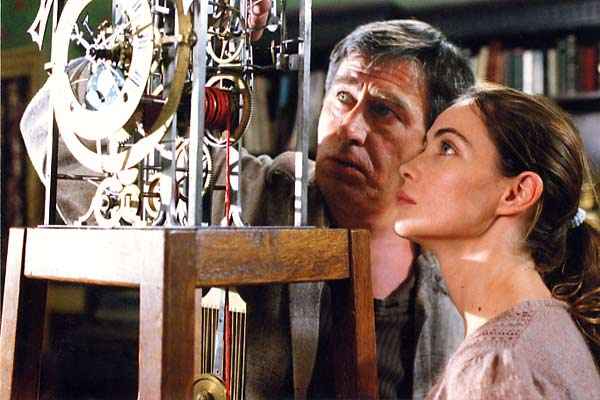 Julien (Jerzy Radziwilowicz) is a clockmaker in his 40’s living a lonely life a year after the woman he loved, Marie (Emmanuelle Beart), disappeared without a trace. Now, he is involved in a blackmail scheme centered on the mysterious Madame X (Anne Brochet), a trafficker in fake and stolen antiques, when Marie reappears on the scene. The beautiful young woman has a detached, ethereal air about her as the two rekindle their past relationship and Marie begins to construct a room that explains it all in “The Story of Marie and Julien.” Veteran Franco helmer Jacques Rivette takes on an odd sort of ghost story that is, perhaps, a bit more ambiguous than it should be. Things don’t quite make sense as Julien dreams of his long lost Marie trying to kill him. He is involved in a scam, for some reason, in providing forged documents for a collection of fake antiques for Madame X. When Marie returns, suddenly and without explanation, Julien accepts it willingly as he takes on a large-scale clock repair job. An idyllic life, of sorts, is regained but the wistful Marie is troubled. She commandeers a spare room in Julien’s rambling home and, very particularly, begins to furnish and appoint the chamber. You get the impression that things are getting otherworldly as Madame X’s sister’s story and Marie’s story become intertwined and the mysteries begin to unfold. What transpires is a moderately intriguing tale that is a little too ethereal, especially Beart’s performance which seemed far too mannered. This is a movie, though, that I could not get my arms around and I always felt like an outsider looking in, not given an emotional hook into the story. It is lovely to look at, gorgeously photographed by William Lubchansky, and Julien’s home is a character unto itself. But, the film never stirred my core.