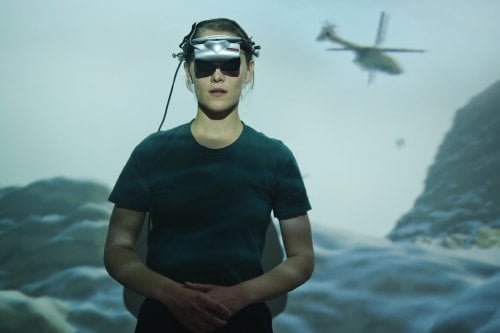 After six months in Afghanistan, Aurore (Ariane Labed, "The Lobster") and Marine (Soko, "Augustine"), friends since childhood, are on their way home with their unit. But they are not heading directly to France, instead detouring to Cyprus for a three day decompression program at a 5 star hotel where they will exercise, relax and take part in virtual reality-assisted retellings of their war time experience. The picture that coalesces from shared perspectives will further agitate damaged psyches during "The Stopover."

The first image we see in writer/director Delphine and Muriel Coulins' ("17 Girls") second film is the interior of a plane, a calm sea of blue seats and blue sleep masks. The first thing these passengers will view upon disembarking is the ocean, then the pool at their resort and the inviting waters of a full tub. But still waters run deep and the trauma this unit has experienced is percolating beneath the surface. Aurore is introspective. We see angry red marks on her body as she prepares to soak in the bath. Marine appears hostile, her response to the other female in their unit, Fanny (Ginger Romàn), sarcastic as the Army nurse seeks refuge in their room. They begin to relax as Aurore produces the marijuana she's smuggled back, Marine the live snake she's transported in a sock. Out by the pool, the unit regards oblivious tourists like aliens from another planet. As they gather for their first psychological debriefing, the mood is guarded. There is consternation as one of their own admits to having had no feeling in his left arm 'since Mobayan.' He's led back, describing a horrific ambush on a snowy mountain path. Aurore speaks and we learn that she was shot there. Help was a long time in coming. Back at poolside, Aurore and Marine are offered a local tour by Chrystos (Andreas Konstantinou) and Harry (Makis Papadimitriou, "Chevalier"). Marine says they are not allowed to leave while Aurore keeps her options open. At the next debriefing, Max (Karim Leklou, "A Prophet") reveals that Aurore's Jeep, the first in their convoy, was 'sacrificed,' the others, including Marine, ordered to go back. Aurore asks Fanny to go out with the Cypriots, but Marine catches up and joins them. The local lads take the women to the border of no man's land that separates Greek Cyprus from its Turkish side, a metaphor on more than one level. Harry comes on strong to Fanny, but just as the women become worried, up drives Jonathan (Alexis Manenti), the unit member who insists he is perfectly fine, to save the day, taunting the women for choosing local men over 'their own.' Both parties drive to a local festival, Aurore slipping off with Chrystos. But by the end of the evening, tempers flare. The Coulins use virtual reality in lieu of flashbacks and these early scenes are a bit surreal, almost an inverse "Manchurian" hypnosis. The film grows more conventional as it goes along, laying out the incredibly high hurdle of reassimilation into civilian life. We've become used to army units portrayed as tightly knit groups fighting for each other, but these filmmakers reveal betrayals and condemnations, macho ideas of strength conflicting with healing revelations of truth. A boating excursion turns violent, but that's nothing compared to what happens on the last night in Cyprus. As one female soldier notes, 'they needed an enemy, tourists, Cypriots...but they chose us.' As in their first film, the Cullins employ a palette of blue and yellow, Aurore and Marine from the military town of Lorient, the site of "17 Girls" and the filmmakers' own hometown. The writers, who won the 2016 Cannes Un Certain Regard screenplay prize, seem to be sending a message to the youth of Lorient, their protagonists having joined the military not only because of economic conditions, but 'to see the world.' Aurore has seen nothing. The last shot is a stunner, Aurore having landed in France in profile before an arrivals board listing global destinations. Then she walks away, towards home. Grade:

A French combat unit is heading home from a tour of combat duty in Afghanistan. The three-day journey home includes a stop in Cyprus, where they will have time for “decompression and debriefing” during “The Stopover.” We have seen films that center on a particular character and his/her battle with PTSD following horrific experiences in combat. This, to me, is the first Afghan war soldiers’ story dealing with the trauma all face when their tour is over and their need to re-acclimated to civilian life. The story focuses on two female soldiers, Marine (Soko) and Aurore (Ariane Labed), as their mostly-male unit head home from combat following a deadly firefight with Afghan rebels. Once ensconced in luxury digs on Cyprus, the army psychiatrists head the debriefing of the troops, using VR to recreate those turbulent combat actions. The idea is to allow the soldiers to better cope with the post trauma of seeing friends killed. That’s the idea, but each soldier’s view of what happened in that last battle is different from the others. Some feel guilt over decisions made, while others were just following orders. Delphine and Muriel Coulin write and direct this original POV story about the impact of combat on the young warriors called to fight. Their examination of PTSD and how it affects the individual soldiers, and hope they cope with it – or not, in many cases – is fascinating and I wanted a more in-depth look at the controversy of the aftermath of war. The story, though, does not continue this examination and shifts gears about halfway through. Then, it becomes young men and women coping with the waiting and bureaucratic red tape keeping them from going home. Of course, they get bored and blow off steam, turning “The Stopover” into something that seems more like a college spring-break misadventure.