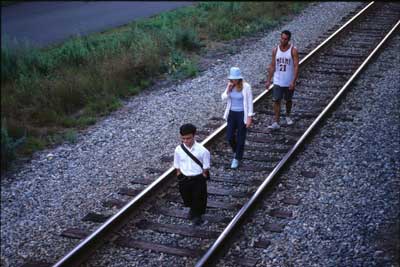 Finbar McBride (Peter Dinklage, "Human Nature") is a dwarf whose life is centered around his job working at The Golden Spike, an electric train store run by his older friend Henry Styles (Paul Benjamin, "Hoodlum"), who also sponsors events for train enthusiasts. When Henry dies suddenly one day, Fin learns that while the shop will be sold, Henry has left him an old train depot in a rural New Jersey town and so Fin's life takes a major turn when he becomes "The Station Agent."

This sweet tale of unlikely friendships is buoyed by the marvelous performances of its star triumvirate. Peter Dinklage is perfection as a man used to isolating himself from the people who generally stare at his diminished stature. Patricia Clarkson ("All the Real Girls") hides great depths of pain over the loss of a child beneath a flightier type of withdrawal as the artistic Olivia. Bobby Cannavale ("The Guru") is a surprising delight as Joe, a great big puppy dog of a man who is simply irrepressible. When Fin takes up residence in his depot, he draws the usual amount of attention but some townsfolk are more persistent about making his acquaintance. Joe, who is operating his ill dad's lunch wagon, Gorgeous Frank's, takes a daily spot literally outside of Fin's front door (why a business would choose an abandoned area to operate in is one bit of scripting that must be forgiven). Joe accepts Fin at face value, proffering a.m. cafe con leche and company. Eventually Joe just wears Fin down and begins accompanying him walking 'the right of way' along the train tracks. Joe is intrigued by sometime customer Olivia, and is amazed when she emerges from Fin's depot one morning. But Olivia had only fallen asleep after bringing a make up gift of bourbon after having run Fin off the road - twice - the day before. Gradually these odd three out form a strong friendship that endures through bouts of troubled rejection. Debuting writer/director Thomas McCarthy (who costarred with Cannavale in "The Guru") has made a wholly likeable film that captures a cornucopia of human foibles. Olivia and Fin's relationship has subtly dark underpinnings of both romance and maternal love that is offset by the Mutt and Jeff-like simplicity of Fin's friendship with Joe. The social structure of a place peopled by blue collar 'townies' and affluent outsiders is reflected within the trio, with Olivia's waterfront home a splendid retreat from the weathered and worn, albeit charming depot. Joe tells off boorish regulars who make offensive jokes at Fin's expense and one of those oafs turns out to be the boyfriend of town librarian Emily (Michelle Williams, "Me Without You"), a lovely girl who appears taken with Fin, a potential romantic pairing hinted at by film's end. "Lovely & Amazing's" Raven Goodwin is Cleo, a little girl interested in trains who makes awkward overtures to Fin. She's charming, but McCarthy doesn't successfully integrate her into the film. McCarthy helps his actors by building up character through odd details. Fin's initial grim outlook on life is reinforced by the daily reminders of his otherness. 'I didn't see you' says a cashier. Henry's lawyer questions why he's never met Fin before - 'You're one of those memorable people' he informs him with gusto. Olivia's bright and beautiful house holds her paintings, expressionistic portraits of anguished women. Her propensity for accidents may be born from the guilt she suffers from having looked away 'for only a few seconds' when her son had a fatal accident in a playground. Joe's boundless good nature is capped by his geeky shower sandals and a cell phone that chimes to 'shave and a haircut.' The joy of sleepovers, Joe's cooking, shared beef jerky and an exhilarating videotaped train chase give way to more troubled times, but the friendship has been built with enough depth to bring the characters through to an earned happy ending. Cinematographer Oliver Bokelberg ("The Next Big Thing") photographs the town with the filtered light of a sleepy, late summer afternoon. Original music by Stephen Trask ("Hedwig and the Angry Inch") is train inspired country funk and twang. "The Station Agent" is destined to become a real crowd pleaser, but it will do so marching to the beat of its own clickety-clack.

Finbar McBride (Peter Dinklage) lived a pleasant existence working in the hobby shop with his friend and boss, Henry (Paul Benjamin), repairing toy trains and enjoying the exploits of his train chasing friends. One day, Henry announces "Lunch!" walks out of the room and drops dead. The business is sold, leaving Fin without a job, but he learns that he has inherited an old train station in Newfoundland NJ from Henry. He soon finds out that being a dwarf in small town America is a lot different than in the big city in "The Station Agent." Fin moves into the once bustling station house where he also owns a ½ acre of land, a freight car and a caboose. He learns, the next morning, that he has a neighbor, too. Joe Oramas (Bobby Cannavale) operates the hot dog wagon owned by his ill father and, for reasons unknown, parks his tiny business alongside the empty station. Fin is bewildered by Joe's apparent ignorance over his diminutive stature, keeps his gregarious neighbor at arm's length but can't help bringing the lovable naïf into his life. Fin is introduce to another of the town's folk when, as he walks home carrying his groceries, he is almost run over by Olivia Harris (Patricia Clarkson). He politely refuses her offer of a ride but, within hours, she almost runs him down again. Is this the beginning of a beautiful friendship or should Finbar be in fear of his life? Writer/director Tom McCarthy puts together a warm and funny story about broken people who, with each other's help, are made whole. Fin has a long-pent up anger over being dealt a crappy hand in life. Being a dwarf is not the easiest thing in the world. At best, you are the subject of amusement to others, the "normal" people. At worst, you are treated with derision and as a freak. When he meets Olivia, he finds a person who has suffered far more than he. Two years before, Olivia lost her young son in an accident on the monkey bars. She has suffered, alone, in her grief, after she broke with her husband over her despair. The artist has resisted his overtures and has found solace in the bottle. Joe is happy go lucky lug of a guy who sees the good in everyone, even as Fin tries to deflect his friendly intentions. With his daily cups of special coffee and his willingness to accept Fin's taciturn ways, Joe is content to sit with his new friend and ask him about his life and his hobby - trains. Fin tells Joe about the train chasers who run along their favorite railroad line and capture the chase on video. When Joe asks why Fin isn't a chaser, the little man tells him he does not have a camera. Soon after, Joe makes a gift of a video cam and the two head off down the road to capture their own favorite chases on tape. Joe had warned Fin that Olivia is a flake but a bond develops between the pair of emotionally scarred people. Joe, too, realizes that his friends are troubled and does his best to help them. The trio becomes fast friends and true but scribe McCarthy does not make it cut-and-dried and introduces drama into the whimsy. The bumpy relationships weather the storm of personal troubles and, in the end, you get the hopeful ending that you expect and want. And, there is nothing clichéd about it. Peter Dinklage, as Finbar, may be small in stature but he gives a full sized performance as a man of few words who has built up emotional barriers throughout his life being a dwarf. Fin, though, is an intelligent man and is capable of putting his own problems aside and show compassion for the suffering of others, including a pretty young librarian, Emily (Michelle Williams). Dinklage doesn't use a lot of words but develops a full-fleshed character, anyway. Patricia Clarkson, once again, proves herself to be an A-list actress. She was terrific in "Far From Heaven," last year, and has a one-two combination "Pieces of April" and, now, "The Station Agent." When Olivia goes over the edge with her unrelenting grief, she rips your heart out and makes you feel her despair. Bobby Cannavale steals the show every time his mug is on camera and the actor gives a natural warmth to his funny performance as Joe, a likable guy with an unrelenting upbeat attitude. Tom McCarthy marshals his technical staff well as they capture small town life, the life of a train aficionado and the making of a trio of beautiful friendships. It is a pleasure to see a quirky idea turned into a full-bodied, well-crafted, well-acted little film that uses its oddball nature to wonderful affect.